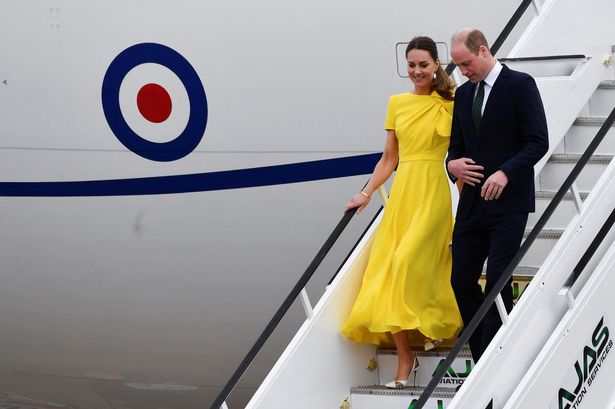 The Duke and Duchess of Cambridge arrived in Jamaica tonight amid protests and impassioned calls for them to apologize for the monarchy’s role in slavery.

Campaigners and leading politicians on the Caribbean island said Prince William and Kate’s visit was “ill-timed and ill-conceived”.

The island nation is odds on to be the next British realm to dump the Queen as head of state, following on from Barbados which last year officially became a republic.

Prince Charles formally acknowledged “the appalling atrocity of slavery” in the Caribbean, saying “it forever stains our history” at the ceremony in Barbados to mark the country’s new beginning. Around 60 protesters gathered outside the British High Commission in Jamaica today calling for slavery reparations.

Organizers called William and Kate’s visit on behalf of the Queen to celebrate her Platinum Jubilee a “deep embarrassment”.

Co-organiser Nora Blake told The Mirror: “We may have been supportive of her before but we are not supportive of the monarchy because we can make a direct link between the monarchy and the system of slavery, colonialism, total and absolute exploitation in the shackles of slavery – and we know that those responsible were compensated and not one of our ancestors has ever received any consideration.”

Ms Blake added: “If I was to sit with Prince William I would ask him face to face to apologize to the people of Jamaica so we can begin to move forward for the future.”

The couple were greeted by dignitaries as their plane touched down
(

A source close to the duke and duchess said the couple were “aware of protests” but added “calls for a republic are matter for people and government of Jamaica”.

The group called Advocates Network, a human rights coalition of Jamaican activists and equalities organisations, this week wrote an open letter to “William and Kate” supported by 60 reasons for an apology and compensation from the Crown.

The letter is backed by 100 figures from Jamaican politics, leading business figures, the clergy and the arts.

Jamaica is the second stop on the Caribbean tour
(

Kate stands with the other dignitaries at the airport in Kingston
(

Protesters pointed to the British monarchy’s role in “financing and perpetuating” the global slave trade from the days of Elizabeth I, leading to tremendous profits across the British empire for ruthless traders in human cargo.

The monarchy also permitted John Hawkins to kidnap slaves from Africa and sell them in the Caribbean.

Under Charles II that the Crown financed the African slave trade while the royal family were owners of The Royal Gambia Company, the Royal Adventurers Company and the Royal African Company.

Ms Blake said: “We are not against the visit of William and Kate as individuals, because we are warm and welcoming people.

“But what they represent as members of the monarchy and what the monarchy means for us as we reflect in our 60th year, we can not join in any celebration of them and the Queen.

Protesters gather outside the British High Commission in Kingston in Jamaica
(

“So the message of thanks they are bringing from the Queen, as thanks for our support, is actually for us a deep embarrassment to have the Queen think that we are supportive of her and her family.

“We may have been supportive of her before but we are not supportive of the monarchy because we can make a direct link between the monarchy and the system of slavery, colonialism, total and absolute exploitation in the shackles of slavery – and we know that those responsible were compensated and not one of our ancestors has ever received any consideration.

“We are not even asking them to pay off money necessarily, there are so many other ways that our development could be facilitated but the wealth that is represented by the UK and the British monarchy does not leave us in a celebratory mood and we make no apologies for that amid this royal tour which is ill-timed and ill-conceived.

Around 60 protesters gathered outside the British High Commission in Jamaica
(

A man holds up a sign at the protest
(

“I know they will have a great time because the people will naturally be welcoming.

“But it’s not about William and Kate as people, except they represent the future of the monarchy so it is, of course, opportune to let them know that we do need an apology and we do need to consider reparations because he is going to be the King.

“So it is William, the future king, we are addressing – not just William as a visitor to the island.

“It’s not about my generation anymore, it’s about our children’s future.”

Charles is the only member of the royal family to publicly raise the issue of Britain’s role in the slave trade.

In 2018 during a visit to Ghana, the future king said the appalling atrocity has left an “indelible stain” on the world.

Charles, 73, said the “profound injustice” of that legacy could never be forgotten, adding: “It was especially important to me, as indeed it was on my first visit there 41 years ago, that I should acknowledge the most painful chapter of Ghana’s relations with the nations of Europe, including the United Kingdom.

The Cambridges have been in Belize since Saturday
(

“The appalling atrocity of the slave trade, and the unimaginable suffering it caused, left an indelible stain on the history of our world.”

Anti monarchy sentiment has been growing across the Caribbean in recent years, in light of the Black Lives Matter and republican movements.

Jamaican Prime Minister Andrew Holness said last week that plans were already being made to dispense with The Queen as head of State.

Culture Minister Olivia Grange has also long made known the Government’s support for compensation from Britain.

“It is only fair for those who have wronged our ancestors to pay the debt they owe to the present generation,” Grange said at a forum in 2018.

In contrast, travel reps on the island have spoken of their hope that William and Kate’s three-day visit to the island would spark a post-Covid tourism revival.

The royals left Belize today after a three-day visit where their presence was further marred by a small protest before they touched down to kick off their tour on Saturday.

Kensington Palace was forced to cancel the couple’s first engagement in the Central American country after local indigenous groups staged a demo over the government’s lack of consultation with them over the royal visit with signs reading “Prince William go home”.

However, William and Kate have charmed locals across Belize and have typically thrown themselves into a busy schedule in their wish to “meet as many local people as possible”, royal aides said.