Kate and Will in the Bahamas (

Kate Middleton and Prince William have “strategically” planned out her royal career that makes “space for parenting”, royal experts have claimed.

The Duchess of Cambridge, 40, has been praised for her growing confidence as William prepares to take the throne after his father.

A royal source told the Evening Standard that her approach has always been “strategic” and “methodical.”

They added: “Everything is all part of a long-term plan that she and William have worked out together.

“Her royal career has been built in an unprecedented way, upon the need to have space for parenting.”

The royal insider added: “There was criticism in the early days of their marriage when they were said not to be doing enough, whereas in fact they were pursuing a different strategy, with the entire agreement of the Queen and Prince Charles.”

Royal expert Ingrid Seward has also revealed that Kate is very deliberate with the work she takes on and will only do it if she feels she can “make a difference.”

She compared Kate to a young Princess Elizabeth in that she “has always known her destiny and is ready for it now.”

Katie Nicholl, the author of Kate The Future Queen and has been on several tours with the Duchess, said the mum struggles being away from her family. 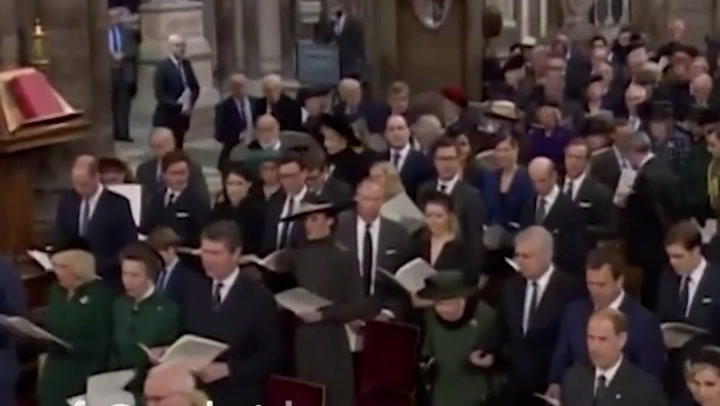 The royal expert also revealed Kate had previously described it as “difficult” to leave her children behind on previous tours such as when they went to Bhutan in 2016.

Katie added: “Despite being the Duchess of Cambridge and being able to afford around-the-clock nannies and so on, she had her mum looking after Prince George and Princess Charlotte, which struck me as just really normal.

“I could see how much comfort and confidence that gave her in getting on with her job, which she does brilliantly, but I think it is always such a wrench for her to leave her children behind.”

Despite the age difference, Kate seemingly has a lot in common with her husband
(

It comes as Kate appears to have struck up a sweet bond with the Queen.

Despite the age difference, Kate seemingly has a lot in common with her husband Prince William’s grandmother including photography and dogs.

And it appears that Kate was keen to show her deep respect for Her Majesty at Prince Philip’s memorial service last week – but she did it in a silent yet powerful way.

Royal fans spotted that as the Queen entered Westminster Abbey for the service last week, Kate performed a deep yet discreet curtsy towards Her Majesty.

See also  Six Nations: Scotland's Ben White on taking two seconds to say yes and why Calcutta Cup bow was the best 10 minutes of his life