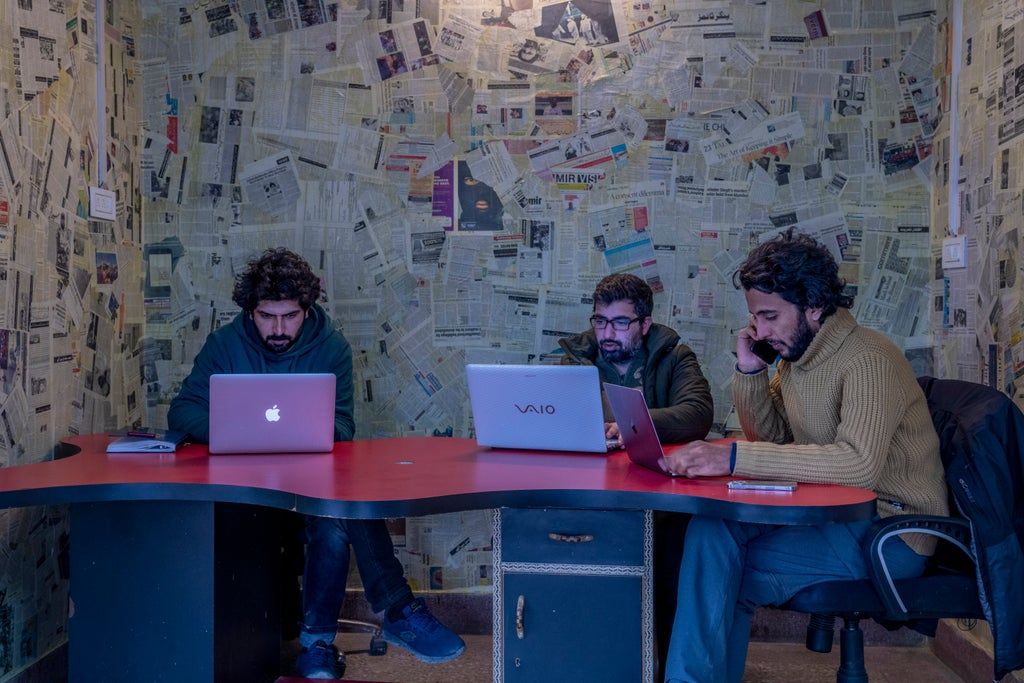 Police in Indian-controlled Kashmir have arrested a young journalist accused of publishing “anti-national content”, police said, in an escalating crackdown on media in the disputed region.

Fahad Shah, the editor of the Kashmir Walla news portal, was summoned for questioning at a police station in the southern city of Pulwama on Friday and later arrested there, police said.

In a statement late Friday confirming Shah’s arrest, police said he was identified among “some Facebook users and portals” that had posted “anti-national content,” without specifying the content. He said such content was posted with “criminal intent to create fear among (the) public” and could “provoke the public to disrupt law and order.” He also said such content was “tantamount to glorifying terrorist activities.”

The case relates to a shootout between rebels trapped inside a civilian house and Indian troops in Pulwama on January 30. Police said a Kashmiri rebel commander was killed in the fighting along with a Pakistani militant and another local militant. They described the fourth teenager killed, the son of the homeowner, as a “hybrid” militant, a term authorities began using last year for suspected militants with no police record and operating as civilians.

Kashmir Walla published a series of reports after the shooting, presenting both sides of the story. A video report quoted members of the slain teen’s family refuting the police claim. Another video quoted the boy’s sister contradicting an earlier statement from the family.

Shah was arrested under India’s harsh anti-terrorism and sedition laws, which include sentences of up to seven years.

Shah and other reporters associated with Kashmir Walla have been questioned by police several times in recent years for their reporting.

Kashmir is divided between India and Pakistan and both claim it in its entirety. Since 1989, a full-fledged armed rebellion has raged in Indian-controlled Kashmir in search of a united Kashmir, either under the rule of Pakistan or independent of both countries.

The region is one of the most militarized in the world. Tens of thousands of civilians, rebels and government forces have been killed in the raging conflict.

Journalists have long grappled with various threats in Indian-controlled Kashmir and found themselves caught between warring sides. But their situation has worsened dramatically since India revoked the region’s semi-autonomy in 2019, throwing Kashmir under a severe security and communication blockade and the media into a black hole. A year later, the government’s new media policy sought to control the press more effectively to censor independent reporting.

Dozens have been arrested, interrogated and investigated under harsh anti-terrorism laws. Fearing reprisals, the local press has largely withered under the pressure.

There have been crackdowns on the press in the region before, especially during periods of massive public uprisings. But the ongoing crackdown is noticeably worse.

Last month, police arrested journalist Sajad Gul after his only tweet linked a video clip of a protest against the Indian government following the killing of a Kashmiri rebel.

Also in January, some journalists who supported the Indian government, with the help of armed police, took control of the only independent press club in the Kashmir valley. The authorities closed it down a day later, prompting strong criticism from the journalistic corps.

Meanwhile, the New York-based Committee to Protect Journalists called on Indian authorities to “immediately and unconditionally” release Shah and “stop investigating his work and stop detaining members of the press.”

Steven Butler, CPJ’s Asia program coordinator, said in a statement that the arrest “shows the Jammu and Kashmir authorities’ utter disregard for press freedom and the fundamental right of journalists to report freely and safely.”

“Authorities must immediately release Shah and all other journalists behind bars, and stop detaining and harassing journalists simply for doing their jobs,” he said.