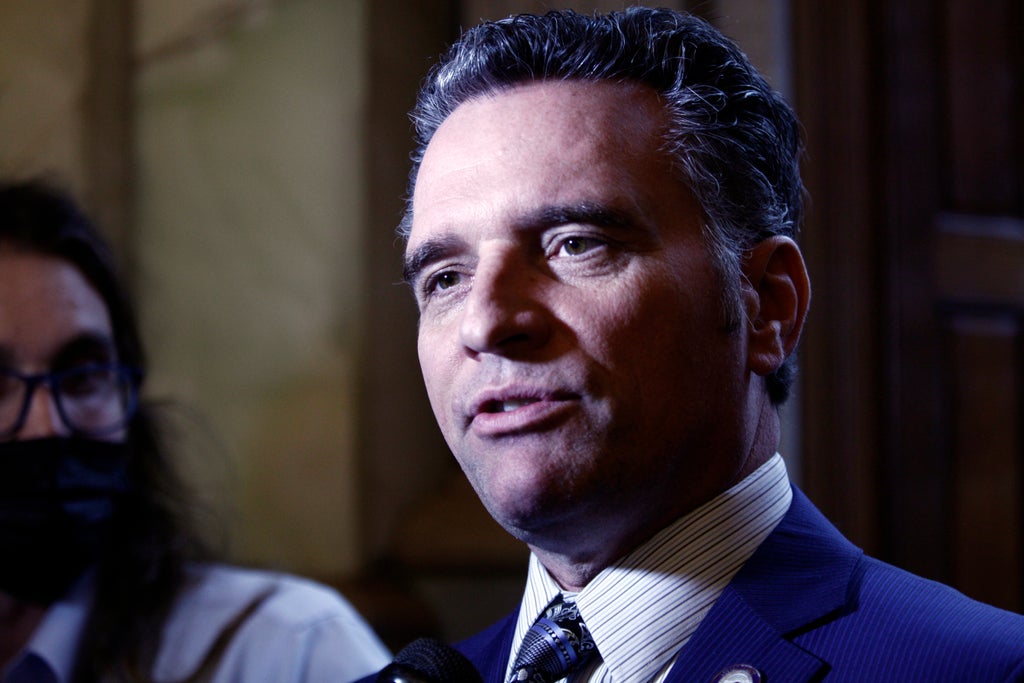 Top Kansas Republicans appeared to get the new congressional district lines they wanted this week through horse-trading in the Legislature Then, hours after the map became law, the GOP leader who supposedly struck the deal seemed to go back on it.

A Republican physician-lawmaker said he and the state Senate’s top leader had a “mutual agreement” to secure his and another crucial yes vote for a map that politically hurts the only Kansas Democrat in Congress. Before they delivered those votes, a bill pushed by the doctor-legislator to promote fringe anti-vaccine ideas and potentially dangerous COVID-19 treatments cleared committee.

The infighting seems likely to continue, complicating Republicans’ efforts to use their Kansas legislative supermajorities to maximum effect as Democratic Gov. Laura Kelly faces a tough reelection race this year.

“You better watch those people that bounce back from everything that was meant to destroy them,” Sen. Alicia Straub, one of the disciplined lawmakers, said in a statement issued after two reporters tracked her down at a Thursday evening hotel buffet and reception sponsored by county treasurers. “Those are God’s people and not to be played with.”

Masterson, a Wichita-area Republican, said he didn’t cut a deal with Steffen. But he acknowledged “plenty of conversations” with Steffen and Straub on “lots of subject matters.”

As for disciplining senators, Masterson said to promote unity among Republicans, “these changes were necessary,” without elaborating.

Republicans overrode Kelly’s veto of their redistricting plan, carving vote-rich territory for Democratic US Rep. Sharice Davids in Kansas City, Kansas, out of her district. The map is expected to face a court challenge with Democrats and Republicans already battling for the majority in the US House.

Masterson needed two tries for an override in the Senate. Steffen, Straub and fellow conservative Sen. Dennis Pyle broke with Republican leaders and voted against overriding Kelly’s veto Monday. The next day, Steffen and Straub voted yes while Pyle abstained.

In between the two Senate redistricting votes, the chamber’s health committee approved the COVID-19 bill. It would protect doctors who prescribe the anti-worm drug ivermectin and other medications for off-label uses to treat COVID-19 and prevent those doctors from facing sanctions over COVID-19 treatments.

Steffen, a bolo tie-favoring anesthesiologist and pain-management specialist who lives some 50 miles (80 kilometers) northwest of Wichita, is under investigation by the state medical board — for public comments about COVID-19, he has said. He has acknowledged writing ivermectin prescriptions that pharmacies have refused to fill.

His measure also weakens the state’s vaccination requirements for children enrolling in schools or day cares by making it easy for parents to claim religious exemptions to avoid now-standard shots for more than a dozen diseases, including measles, chickenpox and polio. Steffen is a vocal vaccine skeptic.

In a Kansas City talk radio interview Wednesday, Steffen said events gave him a chance to press his concerns and to “make progress on all fronts.”

He added: “I was able to meet with the right folks to express all those concerns and we came to a mutual agreement.”

With the new redistricting law in effect Thursday, Masterson used the Senate president’s power to route and reroute bills to push Steffen’s ivermectin bill back to the health committee. It took only a moment.

Shorty afterward, Masterson announced that he’d demoted Steffen and Straub out of committee vice chairmanships and removed them from another committee each. Pyle lost two committee assignments.

Straub, who lives 50 miles further northwest of Wichita than Steffen, has been a consistent ally of his in the Senate.

Pyle, a farmer from far northeast Kansas, once brought a container of stink bait to a debate, using it as a prop in protesting a tax bill. He has clashed repeatedly with Masterson and pushed his own redistricting plans this year.

I have compared Masterson to the troll-like character Gollum in “The Lord of the Rings” fantasy books and movies. He said the Senate president “loves the ring so much that he ca n’t give up his power from him.”

“If that’s what Kansas wants, the establishment-led government, you know, that’s what they’re getting and this is a demonstration of that, right here,” Pyle said of being disciplined.

It’s not clear that Masterson means for Steffen’s bill to be a casualty. The Senate health committee expects to take it up again next week.