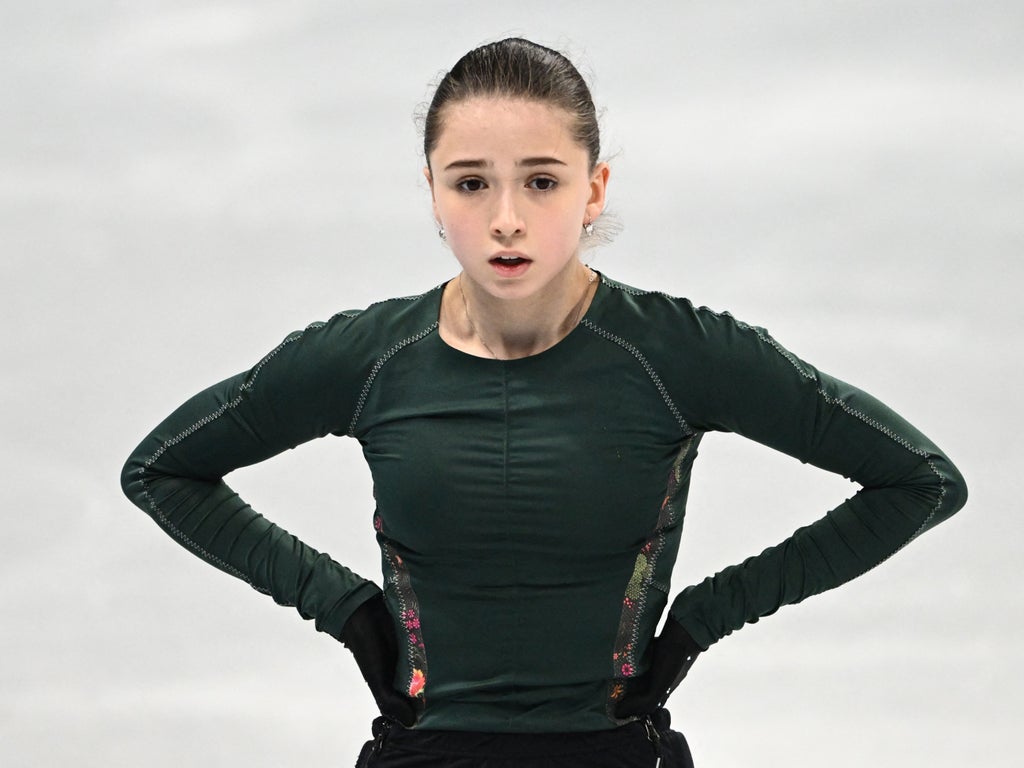 Kamila Valieva will skate for Olympic gold but her dream story could yet turn into a dystopian nightmare.

The 15-year-old Russian star is the hot favorite for the women’s figure skating competition and, despite her tender years, is already considered one of the greatest skaters of all time.

Her stunning world record-winning performance at the European Championships was followed by two brilliant skates in the team event here, helping Russia to a gold medal that still remains in jeopardy.

She became the first woman to land a quadruple jump at the Olympics but her time in Beijing will still be remembered for all the wrong reasons, whatever happens in the days ahead.

And it remains highly possible she could skate and win this week and still have the gold medal stripped from her, weeks, months or even years later.

It is certainly hard not to feel immense sadness for Valieva, a bewildered teenager in the world’s glare, and anger at those who have shown such callous dereliction of duty for a child.

Valieva tested positive for the banned substance Trimetazidine on Christmas Day, although the result was not received until 8 February, the day after she had won team gold.

The International Olympic Committee, World Anti-Doping Agency and International Skating Union then challenged a Russian decision, at the Court of Arbitration for Sport, to allow her to compete

However, a panel of arbitrators – Italy’s Fabio Ludica, Slovenia’s Dr Vesna Bergant Rakocevic and Jeffrey Benz of the United States – ruled she would still be allowed to compete, after a four-hour video hearing in Beijing.

In principle there were three reasons for their decision, which pushes the case beyond the end of the Games – a stay of execution for Valieva that causes massive issues for the integrity of the competition.

Firstly, arbitrators considered Valieva’s status as a minor, meaning she may have a different level of sanction applied as a “protected person”.

Secondly, her wellbeing, with the panel citing the “irreparable harm” she would be caused by not competing, with the skater taking to the practice ice just minutes after the announcement was made.

And, finally, the panel expressed concern about the timeline of the process – claiming the 45 days between the sample being taken and adverse finding reported did not allow Valieva’s legal team a chance to mount their defense.

“The CAS panel is well aware of the rule on mandatory provisional suspensions but has determined that the athlete should benefit from the following exceptional circumstances,” said CAS Director General Matthieu Reeb.

“While these rules have specific provisions for a different standard of evidence and for lower sanctions in case of Protected Persons.

“The panel considered fundamental principles of fairness, irreparable harm, and the relative balance of interest as between the applicants and the athlete, who did not test positive during the Olympic Games in Beijing.

“The late notification is extremely unfortunate as it affects not only the athlete but also the organizers of the Olympic Winter Games.”

The decision was quickly slammed by the US Olympic Committee, whose skaters finished with the silver medal in the team competition last week.

“This appears to be another chapter in the systemic and pervasive disregard for clean sport by Russia,” said US Olympic team chief executive Sarah Hirshland.

“We are disappointed by the message this decision sends. It is the collective responsibility of the entire Olympic community to protect the integrity of sport and to hold our athletes, coaches and all involved to the highest of standards.

“Athletes have the right to know they are competing on a level playing field. Unfortunately, today that right is being denied.

“We know this case is not yet closed, and we call on everyone in the Olympic Movement to continue to fight for clean sport on behalf of athletes around the world.”

Trimetazidine, which is used to treat angina, is a heart medication drug that can increase blood flow efficiency and improve endurance, it is similar to Meldonium, which Maria Sharapova infamously tested positive for at the 2016 Australian Open.

Grigory Rodchenkov, the Moscow laboratory boss turned whistleblower, whose testimony led to the exposure of the Russian doping scandal, claims it has long been a “go to” drug for sports cheats.

In one of skating and sport’s darkest days, this scandal poses major question marks about athlete welfare and the seriousness of Russia’s commitment to clean sport.

The country hasn’t been allowed to compete under their own flag at the Games since 2014, when a bombshell report revealed institutionalized state-sponsored doping at the Sochi Olympics they hosted.

Russia’s anti-doping agency was ruled non-compliant by world authorities in December 2020 and put on a two-year order to improve their processes.

The country has had nearly a decade to improve their doping record and has been found wanting time and time again – with sanctions that are barely proportionate.

It’s a sporting tragedy from which no one emerges with any credit, with perhaps the only innocent party the one who could yet be proclaimed guilty, an unifying sideshow played out under the full glare of the world’s media.

For a sport brought alive by a kaleidoscope of sequined colours, figure skating has always had a dark heart. There have been tawdry tales in the Olympics before – Tonya and Nancy in Lillehammer and a judging scandal in Salt Lake City linked to Russian organized crime.

But this goes beyond those lows, the world against Russia on the borders of Ukraine and on the pristine ice of Beijing. There will be no winners in either tale, just collateral damage.

What have we become, when winning at all costs comes at such a pernicious price?