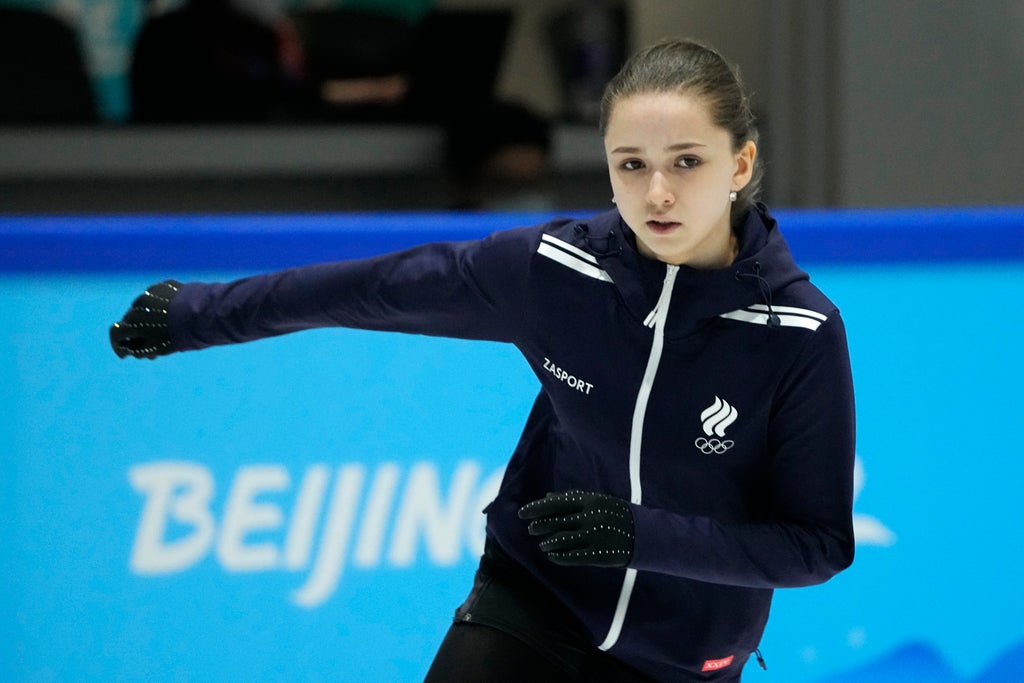 Attention has switched to Kamila Valieva’s controversial coaching team as the bewildered teen’s Olympic ambitions hang by a thread.

The 15-year old practiced again at Capital Indoor Arena while, just a few miles away, the International Olympic Committee and World Anti-Doping Agency were challenging a decision to allow her to compete at the Games.

The Court of Arbitration in Sport (CAS), which has set up a temporary base in Beijing, is expected to announce its decision ‘imminently’, the pressure on to make a ruling before Valieva is due to compete again on Tuesday.

“There is the practicality of an event that is coming up, I really hope this is sorted out as quickly as possible,” said International Olympic Committee spokesman Mark Adams.

“It takes time but it will go as quickly as it is possible to do. There will be a resolution of this case – whether the suspension will be lifted – before the women’s competition, I’m certain as I can be of that.

“We want to see due process and we want to see it as quickly as possible, which is why we’ve asked CAS, with partners, to challenge this.”

Valieva tested positive for banned substance Trimetazidine, a medication for angina on the sport’s doping banned list since 2014, at December’s national championships but was cleared to compete by Russia’s anti-doping agency.

However, the IOC is acutely aware of the wellbeing of the child athlete, with a focus now on her support team, including mentor Eteri Tutberidze.

“We’ve been looking into athlete entourages for some time and we welcome an investigation into the entourage in all cases, where relevant,” confirmed Adams.

“We need zero tolerance for everybody, athletes and entourage,” he told a conference three years ago.

“By putting the focus more on the entourage, by holding everybody implicated in a doping case accountable in a robust and deterrent way, we can take a major step forward for the protection of the clean athletes and to drain the doping swamp.”

Now it is time to live up to the words, while Russia’s anti-doping agency, which was ruled non-compliant with international rules 14 months ago, has also opened an ‘investigation’.

“Since the athlete as is a minor, we have launched a probe in regard to the staff of the figure skater,” said RUSADA statement. “The prime aim of this investigation is to reveal all details of possible violations of anti-doping rules in the interests of ‘a person in defense.’”

Tutberidze, 47, is considered a national hero in Russia, receiving the Order of Honor from Vladimir Putin for coaching a succession of stars, including PyeongChang women’s gold medalist Alina Zagitova. She was also named the International Skating Union’s coach of the year in 2020.

“A very controversial and difficult situation has arisen, there are lots of questions and very few answers,” she told Russian media today.

“I understand that there is some protocol of actions that cannot be dispensed with. We have not abandoned the athlete in any case, we are with our athletes in trouble and in joy to the end.”

But how one of her skaters came to have a banned substance in their system remains a key question in this tawdry tale, a story in which it’s impossible not to feel overwhelming sadness for Valieva – a young girl who has only ever dreamed of winning the Olympics – and madness at the entourage that surrounds her.

“As an athlete, you always follow the advice of your confidants, in this case she probably followed her coach and medical team, this wonder child is not to blame here,” said two-time Olympic champion Katarina Witt.

“You are taught from a very young age to trust them, they know what’s right for you and what’s wrong. She has learned her from her quadruple jumps from her with infinite diligence and courage, no doping would have helped her to land these and certainly it would not help her with her artistic charisma from her.

“The responsible adults should be banned from the sport forever. What they knowingly did to her, if true, cannot be surpassed in inhumanity and makes my athlete’s heart cry infinitely.”

Tutberidze’s training methods are notorious, she demands complete control of her skaters’ lives, with Valieva discussing their relationship last year.

“Eteri knows how to always work, day and night, seven days per week, 12 months per year. I don’t know of any other coach who works so much, she knows me better than anyone else ever will,” she said.

“Everything is very simple, she just fanatically loves figure skating. She is a very creative person, she sees exactly what music and what image will suit this or that athlete, she lives our programs in every detail.

“You need three things to be successful in sport – it’s the athlete, it’s the trainer and it’s the parents. I was three when I started skating, this has been my life for 12 years. My parents have no days off, no holidays, they’ve given up their lives for this dream. It’s my dream, it’s their dream and it’s Eteri’s dream too.”

Meanwhile, former WADA chief and IOC member Dick Pound has called on Russia to take a ‘timeout’ from the Games.

The country hasn’t competed under its own flag since 2014, when the Games they hosted in Sochi saw widespread state-sponsored doping, exposed in the explosive McLaren Report.

“At a certain point if they are absolutely incorrigible you end up with the position of taking a country timeout,” said Pound.

“We could say we can help you. You got a problem. We can concentrate on it. Take a time out for one or two, or three Olympic Games until you get this under control.”