Skip to content
Home News Kamila Valieva: How the face of the Winter Olympics became embroiled in another potential Russian doping scandal 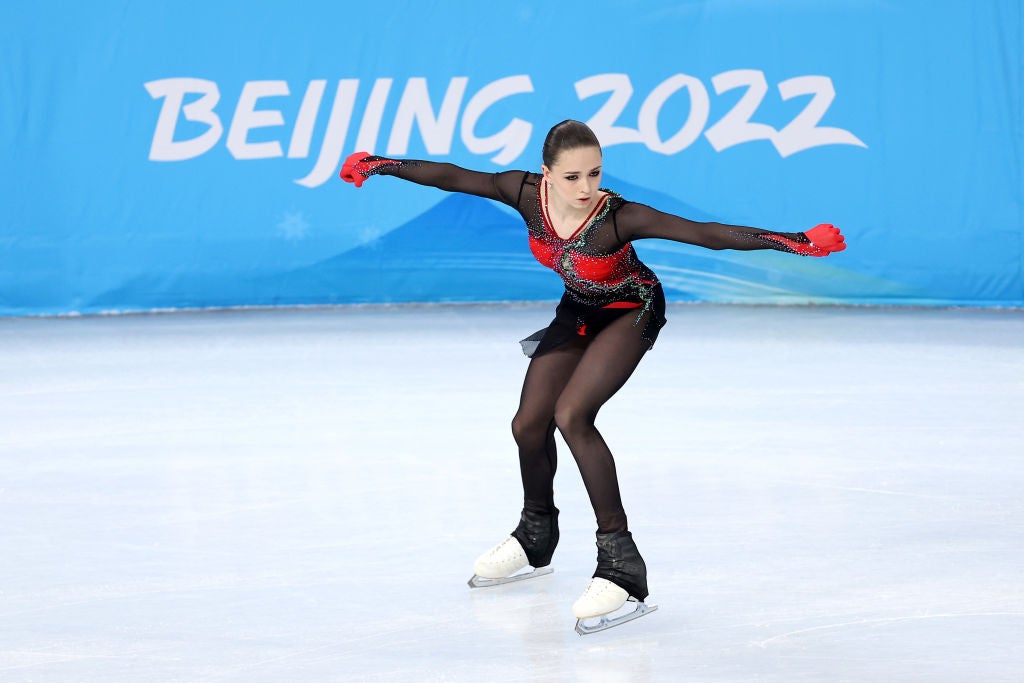 Kamila Valieva blinked into the flashbulbs, fixed her grin and took to the ice, cameras clicking with each twist and turn.

Valieva is every inch the star performer, which is precisely why the 15-year old Russian figure skater was expected to be the face of these Olympic Games.

She went through her practice session with skill and precision, while her mentor Eteri Tutberidze and Russian team coaches Daniil Gleikhengauz and Sergei Dudakov looked on approvingly.

Tutberidze doesn’t joke – her ferocious competitiveness, lived vicariously through her ever-obliging skaters, is feared and legendary – so don’t read too much into the stony face.

Having become the first woman to land a quadruple jump at the Olympics, Valieva perfected a string of them in practice as she rehearsed her eagerly-awaited free skate, set to the music of Ravel’s Bolero.

There is no doubt she is the best women’s skater in the world, perhaps the best ever. She looked confident and collected, how she really felt inside you can only imagine.

The world’s media should have been next door, watching Nathan Chen winning Olympic men’s gold, but they had the sniff of a story and scent of a scandal.

Few sports gossip like figure skating and the Olympics is full of tawdry tales, sparkling among the sequins. After all the worry and stress of a positive Covid test, this was safe and familiar ground, featuring a usual suspect – Russia.

“She is not suspended, why should she not be here?” said Olga Ermolina, a spokesperson for the Russian figure skating federation.

In a Games with a limited cast of big names, Valieva’s star was expected to shine brightest but then came the news that sent the Olympic world into a dizzying camel spin.

She had helped Russia win team gold on Monday but the medal ceremony on Tuesday night was delayed at short notice without explanation.

The following day an IOC official claimed this was because of an ongoing ‘legal issue’, within hours Russian media were claiming Valieva had failed a pre-competition doping test.

Anastasia Gubanova, a Russian-born skater who represents Georgia, shared the ice with Valieva in practice and admitted shock about the allegations.

“It would be very unfortunate for her if something bad happens because of this,” she said.

The reported drug, Trimetazidine, is used to treat angina and has been on the World Anti-Doping Agency’s banned list since 2014.

Also known as TMZ, it increases blood flow to the heart and limits rapid swings in blood pressure. It is not a drug that can be taken accidentally and not something you’d expect a 15-year-old to be prescribed.

Of course, Valieva may have a ‘Therapeutic Use Exemption’, an official medical document giving an athlete permission to take a medication that is ordinarily prohibited for the treatment of a legitimate condition.

However, if this was the case it is surprising the information has not been released. Since the story broke, a Great Wall of silence has been erected in China and in that vacuum, speculation has bred.

“The most important thing regardless of all of this is we have a young, female skater involved in this story,” said Eurosport figure skating expert Valentina Marchel, a two-time Olympian.

See also  Parent-friendly workspace in public library goes viral on Twitter: 'This is a game-changer'

“With the speculation continuing, it threatens to be a very sad day for the sport I love.”

It is claimed Valieva tested positive last year, in which case serious questions need to be asked of the International Skating Union, famously one of the more terse associations in global sport, the International Olympic Committee and the Russian Olympic team.

Of course, we expect little of Russia, who are competing at their fourth consecutive Games under a neutral flag because of the state-sponsored doping exposed when they hosted the Games in 2014.

It’s vital to learn when the ISU, IOC and Russian team knew of Valieva’s adverse sample, because this is as much a story about athlete welfare as it is about sports doping.

And there’s a broader issue about wellbeing and Valieva too; one of her coach’s former skaters, Polina Shuboderova, has already accused Tutberidze of pressing her charges to train with injuries while weighing them regularly to achieve a narrow target weight.

“I don’t deal with gossip,” Tutberidze was quoted as saying by Russian news agency TASS yesterday.

But gossip right now is all we have. The IOC delegated responsibility for these matters to the Court of Arbitration in Sport and Independent Testing Authority – sport can really be a soup of acronyms – to show transparency.

The world is waiting and prompt answers are needed, for a 15-year-old child’s sake as much as anything.