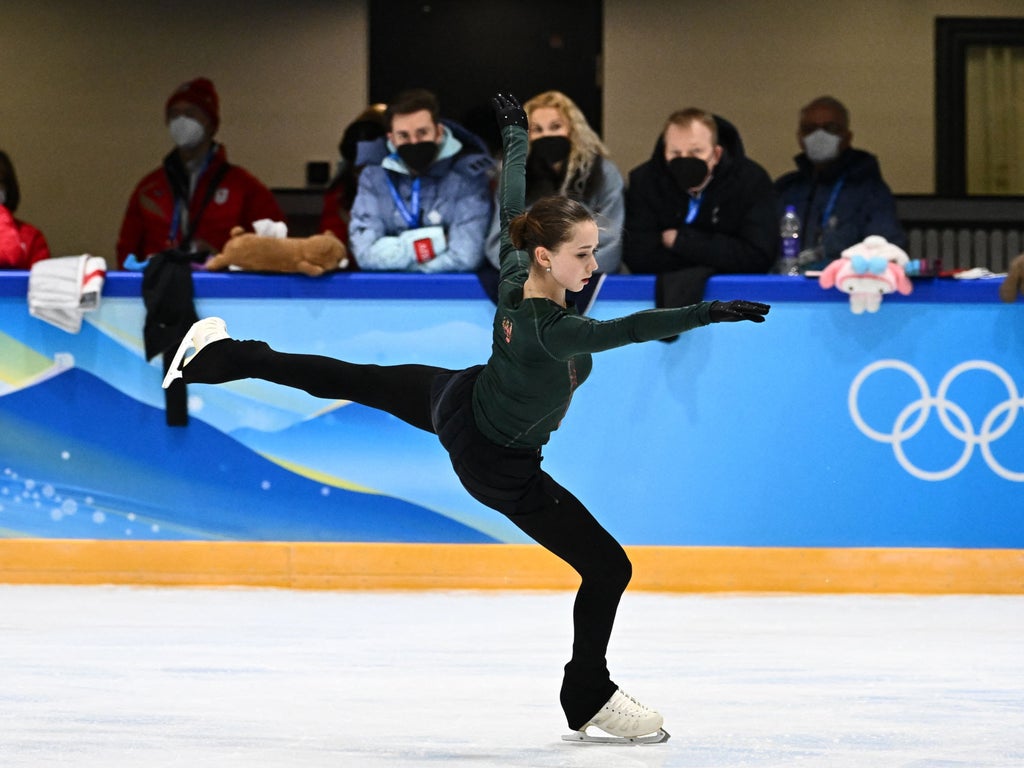 The only thing we know for sure, for certain, is Kamila Valieva will now skate for Olympic gold.

All things being equal, she should win too because there is frankly no better figure skater in the world, arguably ever.

But there the certainties stop and this tawdry tale becomes as murky as the slate gray Beijing sky, after another depressing day in the more questions than answers story that has dominated the Games.

Olympics are often remembered through the lens of their leading ladies, Larisa Latynina in 1960, Nadia Comăneci in 1976, Cathy Freeman in 2000 – Beijing will forever be ‘Valieva’s Games’, only for all the wrong reasons.

What has sport become when it’s come to this, high-powered lawyers meeting in a five-star hotel to decide whether a 15-year old girl, who has tested positive for a performance-enhancing drug, can live out her dream?

If this – to borrow the words of Beijing’s omnipresent motto – is our ‘shared future’then we need a long hard look at ourselves to decide whether we want any part of it.

Already the International Olympic Committee has decided there will be no medal ceremony for the women’s competition, meaning Valieva could win an Olympic gold and never receive it. What an unmitigated and wholly avoidable mess.

Valieva has been cleared to compete but she has not been cleared of doping – which means any medal she wins could be quickly tarnished when the legals get involved, which they will because nothing says sport quite like a sharp-suited lawyer using really long words.

The Court of Arbitration in Sport have allowed her to compete for three reasons – her age, concerns for her wellbeing and the fact it took an unfathomable 45 days for a positive sample taken on 25 December to be communicated to the Russian team. Whether that is a cock-up or a conspiracy remains to be seen.

It sets a worrying precedent but may also finally shift sports to deciding whether athletes should really be allowed to compete on the world stage until they’ve come of age.

It’s said the best stories have one fact but this one needs lots of words to tell and an understanding of the soup of acronyms that run our sport, from the IOC to WADA, ITA to CAS, ISU to RUSADA.

It would be fair to read this all and just say ‘WTF’.

We may never know the answer to why this bewildered child came to record an adverse doping test for a drug used to treat angina but also proven to increase blood flow and improve endurance.

Athletes must live by the rule of strict liability, they and they alone are responsible for what goes into their body.

It’s the only way to stop the denials when the positive arrives, from sprinter Dennis Mitchell’s ‘I had too much sex’ to cycling’s Adri van Der Poel eating a contaminated pigeon pie and Shane Warne using a banned diuretic for getting rid of his double chin.

But Valieva is a minor and that makes such binary decisions more nuanced, whatever the arguments on this story surely it can be agreed she’s been let down by those who had a duty of care for her? Is any of this her fault? Unlikely.

“Athletes who violate doping cannot compete in the Games,” said 2010 Olympic champion Kim Yuna, in an Instagram post with a black tile. “This principle must be observed without exception.”

Katarina Witt, a two-time Olympic champion in 1984 and 1988, added: “Olympic clouds have become a shade darker today and there are only losers on all sides.”

Meanwhile, Russian denials began in earnest in Beijing – blaming the western media for distorting the story, bellowing ‘fake news’ via a flurry of trolls and bots and suggesting that no matter how Valieva skates, the corrupt judges will snatch the gold medal from her. .

It would be a good argument if the skaters most likely to challenge her were not teammates Anna Shcherbakova and Alexandra Trusova, who both share Valieva’s controversial coach Eteri Tutberidze.

And it’s worth remembering this is the same Russia who haven’t been able to compete at the last four Games under their own flag because of the institutionalized state-sponsored doping at the Games they hosted in 2014.

And the same Russia behind the worst judging scandal in the sport’s history – 20 years ago in Salt Lake City, a story that led to mob boss Alimzhan Tokhtakhounov being arrested for masterminding the fix.

Some say this should be a wake-up call for finally taking things seriously, which would be fine if we hadn’t been slumbering for four decades or more.