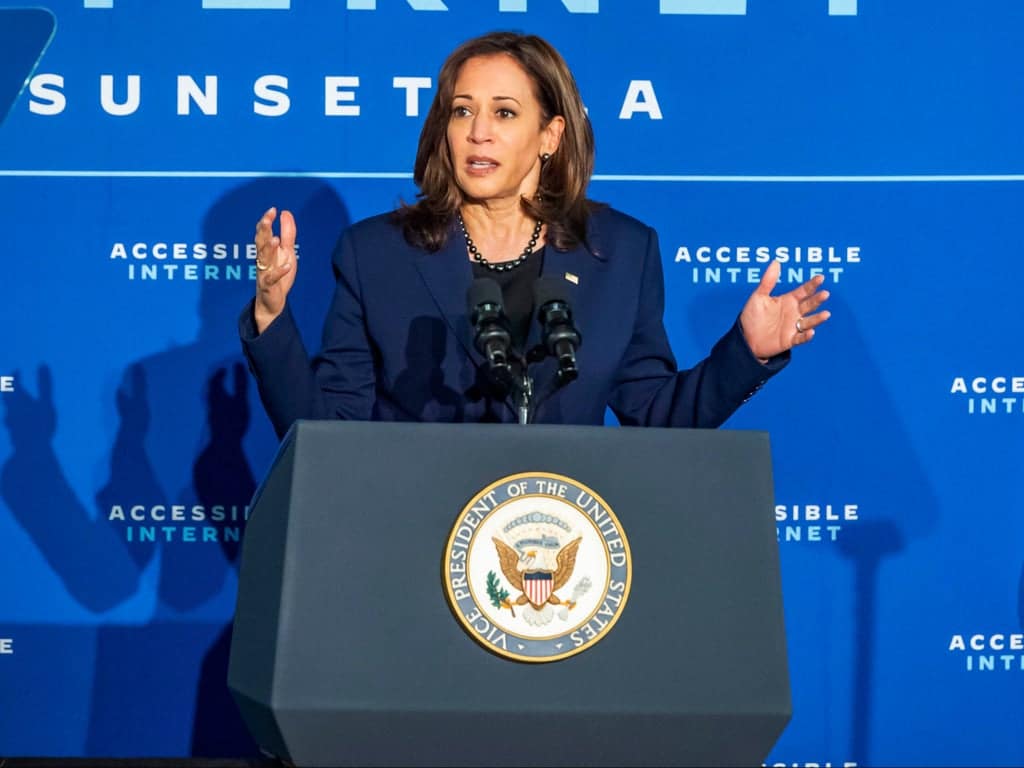 InThis Will Not Pass: Trump, Biden, and the Battle for America’s Future, Jonathan Martin and Alexander Burns of New York Times write that Ms Harris was angry at the publication for running with a photo of her in skinny jeans and converse sneakers.

The Vice President had been expecting another more formal image to be used, the book reports.

“Harris was wounded. She felt belittled by the magazine, asking aides: Would fashion depict another world leader this way?” the reporters write in The Will Not Pass, an excerpt obtained by Politico reveals.

Symone Sanders, the then-incoming Press Secretary for the Vice President who has since left the administration, reportedly reached out to Ms Wintour to share Ms Harris’ complaints.

Ms Wintour pushed back on the criticism, noting that she had chosen the photo herself because it made Ms Harris appear “relatable”.

Chief of Staff to the Vice President, Tina Flournoy, was also reportedly caught “off-guard by the anger.” She got in touch with a senior Biden advisor, who noted that amid the crises the country was facing, such as the pandemic and the 6 January Capitol riot, “this was not the time to be going to war with fashion over a comparatively trivial aesthetic issue. Tina, the adviser said, these are first-world problems.”

The reporters write that the tension between the offices of Joe Biden and Ms Harris only increased from there, with anger and frustration in the vice president’s office mounting.

“Some of Harris’s advisers believed the president’s almost entirely white inner circle did not show the vice president the respect she deserved,” Mr Martin and Mr Burns write. “Harris worried that Biden’s staff looked down on her; she fixed on real and perceived snubs in ways the West Wing found tedious.”

Ms Harris eleven sent Ms Flournoy to speak to Biden adviser Anita Dunn to say that the vice president was frustrated that White House staff didn’t stand up for her when she entered a room as they did for Mr Biden.

“The vice president took it as a sign of disrespect,” The Times reporters state.

While the West Wing and the vice president’s office didn’t comment, Ms Dunn told Politico that she wasn’t “going to comment except to say that everyone in the West Wing has a high degree of respect for the Vice President and the hard work she is doing for this President and our country. Particularly me”.

This Will Not Pass also reveals that Ms Harris’ staff floated the “possibility of the vice president overseeing relations with the Nordic countries — a low-risk diplomatic assignment that might have helped Harris get adjusted to the international stage in welcoming venues like Oslo and Copenhagen”.

“White House aides rejected the idea and privately mocked it,” the reporters write. “More irritating to Biden aides was when they learned the vice president wanted to plan a better speech to outline her view of foreign policy. Biden aides vetoed the idea.”

The Northern Triangle countries of Guatemala, Honduras, and El Salvador had been under Mr Biden’s review when he was vice president, and he was now handing the responsibility to Ms Harris, whose staff saw the assignment as problematic due to the migration issues at the southern border.

“Harris was resigned to the assignment,” the authors write, noting that she wanted to stay clear of the label of “border czar.” She “did not hesitate to chide Biden for characterizing her assignment from her in those terms.”

In a meeting with Congressional Black Caucus leaders in the middle of April last year, Mr Biden lauded Ms Harris but said he had handed her the immigration issue and that she would do “a hell of a job”.

“The vice president corrected him at once,” the reporters write. “Excuse me, she said, it’s the Northern Triangle — not immigration.”