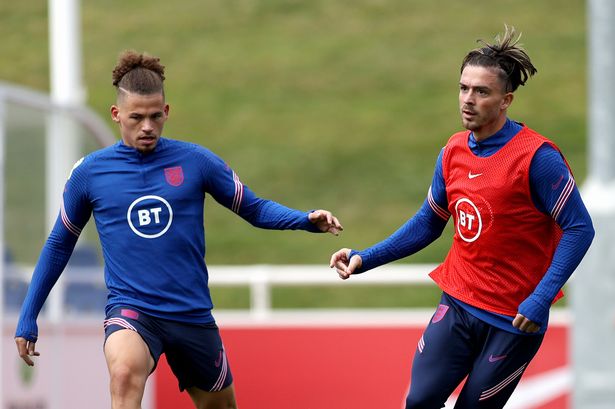 If you say the words ‘double pivot’ to any Manchester City fan, the chances are you’d get an impulsive groan, or sigh, or even a shudder.

Because when Pep Guardiola has played two defensive midfielders together in the past, it’s rarely paid off, and in fact had a negative impact on City’s balance. When Guardiola is accused of ‘overthinking’, it is often because he wants to be slightly more defensive against a quality opponent, and adding an extra holding midfielder is a defensive move.

However, with Fernandinho gone, City have agreed a deal for Leeds and England star Kalvin Phillips, who can play at the base of midfield but also further forward. Maybe he is the player Guardiola needs to finally perfect the dreaded double pivot.

ALSO READ:Man City signing Kalvin Phillips will give Pep Guardiola more midfield options than ever before

To look at Phillips’ role for England is probably where most City fans will be familiar with their incoming signing. At Euro 2020, Declan Rice sat deep, in a role that has similarities to Rodri’s at City, and Phillips would come deep to support but also help carry the ball forward and link England’s attack and defence.

He was the surprise package at Euro 2020, and it’s no coincidence that he’s featured for England since when available. Even if his predominant position for Leeds is the more traditional holding midfielder at the base of a 4-1-2-2-1 formation, maybe it’s his qualities at the bottom of a double pivot that are most appealing to City.

Because Phillips won’t displace Rodri for the majority of his time at City, and he will also have to compete with Ilkay Gundogan for game-time too. Where his minutes of him may come, then, is when Guardiola wants to try two holding midfielders, with three attacking midfielders ahead of them and a central striker. History says Rodri and Gundogan don’t necessarily work in that role as well as others could.

So with that extra protection, maybe someone like Jack Grealish could be a main beneficiary, especially after recent comments from Guardiola and Gareth Southgate regarding where he needs to improve.

Earlier this month, Southgate said Grealish needed to improve his ‘tactical level’ after impressing in a 20-minute cameo vs Germany. Guardiola has also challenged Grealish’s tactical awareness to improve, while the player himself has said he felt the pressure to sometimes keep possession in his debut season at the Etihad rather than attack.

Now, though, if City were to add another layer of protection between attack and defence, Grealish may be encouraged to play that risky ball more often, or drive with it himself just like he did at Aston Villa or in those cameos for England.

Phillips has already described Grealish as a ‘perfect’ teammate due to his abilities to keep the ball in tight situations, so there is already a promising relationship there that could only help Grealish on that left side.

So while Phillips will be signed to replace Fernandinho and increase the bodies in the centre, it’s also fair to suggest he could have a knock-on effect in unleashing the attacking qualities in Grealish that he may have suppressed over the last year.