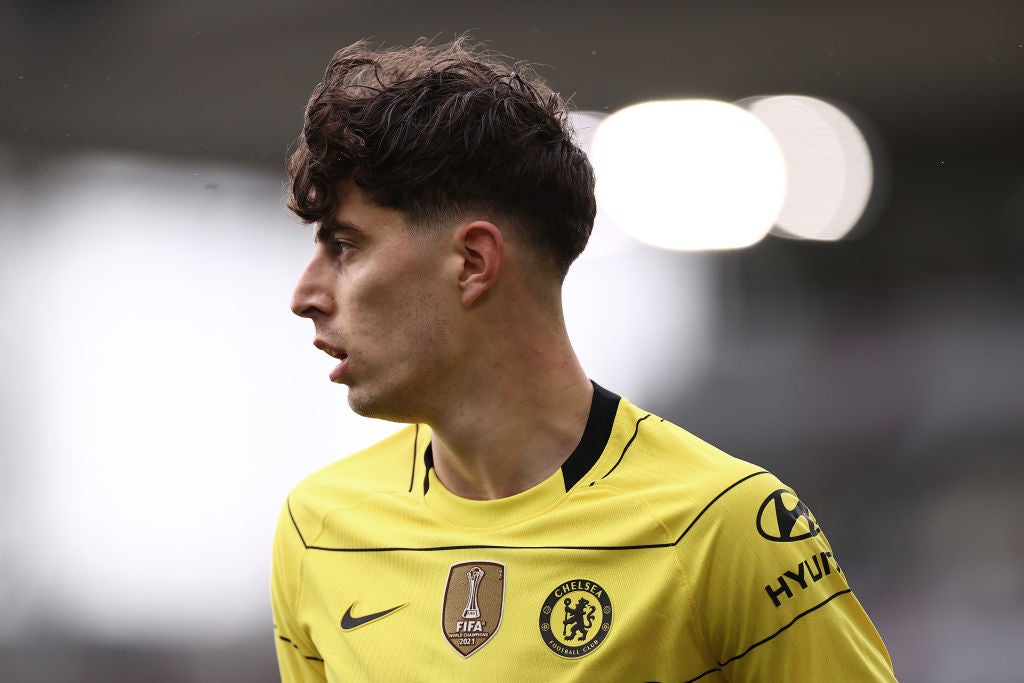 Kai Havertz needed just two seconds to “turn everything around”. Chelsea’s go-to man for the big occasion, the scorer of the goals that crowned Chelsea as European and then world champions, is all too aware of the importance of seizing the moment when it arrives.

Ahead of Sunday’s Carabao Cup final against Liverpool, it seems particularly relevant advice, perhaps, for Romelu Lukaku. From one club-record signing to another, score in the biggest match of the season and everything else, to an extent, will be forgotten.

Whether Lukaku gets the chance to start up front against Liverpool, or not, may depend on Havertz, and Thomas Tuchel’s decision to opt for one No 9 over another “false” one.

“I know I am not a real number nine,” Havertz admits, and although he at times talks as if he is one, with just two Premier League goals to his name this season he cannot claim to have the edge on Lukaku in terms of numbers.

But then Havertz is a bit of everything. He started as a No 8, has played at No 10, at times also as a winger in Germany, floating in and out of positions as often as has drifted between the starting line-up and the bench since his arrival at Chelsea for £75m in September 2020.

He doesn’t have a favorite role, but the 22-year-old likes to arrive into the box and be close to goal, while dropping back into midfield and initiating attacks from deep. Havertz wants to offer it all, especially when he is chosen to lead the line. “I know I am not just in the box and waiting for the ball for a header,” he says. “I want to have an influence on the game.”

The important thing for Havertz is he doesn’t believe his own words. He is able to see the difference between outside perception and noise to the realities of his own development.

But there was, and still is, an expectation that after firing Chelsea’s winner against Manchester City in Porto last May that Havertz would kick on. Although his extra-time penalty against Palmeiras to win Chelsea the Club World Cup was followed by the opener against Lille in the Champions League, two big goals in the space of two weeks, it still feels as if the next step has yet to arrive.

And yet he is still set to start ahead of Lukaku at Wembley on Sunday, perhaps alongside Christian Pulisic and maybe even Mason Mount as part of the fluid, mobile and interchangeable front three that caused Liverpool’s high line problems in the 2-2 draw at Stamford Bridge last month.

“I am now at an age where I have to provide it. I’m not a talent any more,” he says. “I played now five years on a good level, so I want to prove myself. I’m a little bit disappointed with my Premier League statistic this year but I’m always here to improve and I want to get better.

“I know that I can do a lot better and I will try to do my best to keep my head up and just try to score goals and do assists because as a No 9 everyone wants you to do that.”

Just ask Lukaku. Benched against Lille on Tuesday, following that seven-touch display against Crystal Palace that weekend, and with just two goals in his last 10 appearances.

“I think we are being a little bit too hard on him,” Havertz suggests. “Everyone is always putting pressure on the big players, players who cost a lot of money. I know this feeling from last season, from this season as well.

“For me, the first season was not my best but at the end I scored a very important goal in a Champions League final. This maybe helped me a lot. I think if I didn’t score this goal everyone would say, ‘he’s so bad’. Two seconds in one year that maybe changed the whole year for me. Small things can turn everything around.”

Havertz is talking about Lukaku, but also about himself. He more than anyone in the Chelsea squad understands the importance of capturing the big moment, and could even do with adding another. So could Lukaku, but if Havertz’s Sunday goes to plan, will he even get the chance?