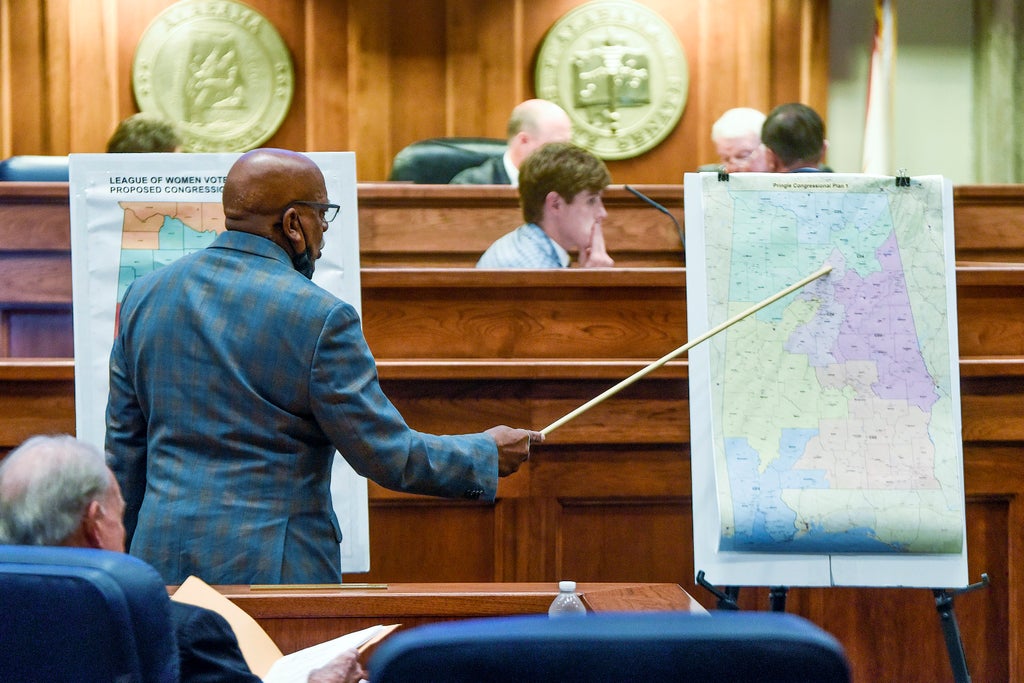 The US Supreme Court is weighing Alabama’s request to freeze a court order requiring the state to draw new congressional lines and create a second district with a significant number of Black voters.

Alabama has asked the court to halt an injunction issued by a three-judge panel blocking the use of the current map after the panel found it likely violates the Voting Rights Act.

The Alabama attorney general argued the ruling will throw 2022 elections into chaos and require the state to put race above other redistricting criteria. But lawyers for people and organizations that brought the initial lawsuit dispute that and argue the current lines — similar to those in use since the 1990s — do not reflect a state that has grown more racially diverse.

“This is very much a textbook case of a Voting Rights Act violation,” said NAACP Legal Defense Fund senior counsel Deuel Ross, whose organization represented the plaintiffs in the case.

The three-judge panel last month found Alabama’s map, drawn by the GOP-dominated Alabama Legislature, likely violates the Voting Rights Act because, “Black voters have less opportunity than other Alabamians to elect candidates of their choice to Congress.” The decision cited Section 2 of the Voting Rights Act which prohibits racial discrimination in election procedures.

The judges added that any “remedial plan will need to include two districts in which Black voters either comprise a voting-age majority or something quite close to it.”

“We think that Alabama has an obligation to draw fair maps that are reflective of the state’s very rich history of diversity, not just racial diversity, but diversity in terms of representation for everyone,” Ross said.

The Alabama attorney general argues the ruling will improperly require states to prioritize race over other redistricting criteria.

“The court-ordered redraw marks a radical change from decades of Alabama’s congressional plans. It will result in a map that can be drawn only by placing race first above race-neutral districting criteria, sorting and splitting voters across the State on the basis of race alone,” Alabama Attorney General Steve Marshall wrote in the state’s appeal to the US Supreme Court.

Fourteen conservative-led states signed on to a brief in support of Alabama, arguing that the ruling and “absence of clarity no doubt means litigation will ensue across the country over new maps.”

Lawyers for plaintiffs argued Alabama is misrepresenting the ruling as prioritizing race instead of assessing whether an additional majority-Black district could be created consistent with compactness and traditional districting principles.

It is unclear when the court will rule but Alabama faces a looming deadline to get new maps in place unless justices intervene.

See also  Don't be Your Own Tinder Swindler

The three-judge panel pushed back the congressional candidate qualification deadline with political parties from Friday until Feb. 11 to allow the Legislature the opportunity to enact a remedial plan.

Alabama lawmakers appear to be waiting on the US Supreme Court’s decision. The legislative reapportionment committee has not met since the ruling of the three-judge panel, some members said.

“The attorney general has filed motions of stay and of appeal with the Supreme Court and we’re just going to need to see what the outcomes are, Senate President Pro Tem Greg Reed said.

Evan Milligan, a Montgomery resident and the lead plaintiff in the lawsuit, said Alabama likely would have lost a congressional seat if not for the population growth of minority groups, including people born in other countries.

“To produce maps that undercount the voting strength of the very population that’s contributing to the ability of the state to even have seven congressional districts is even more indefensible to me,” Milligan said.