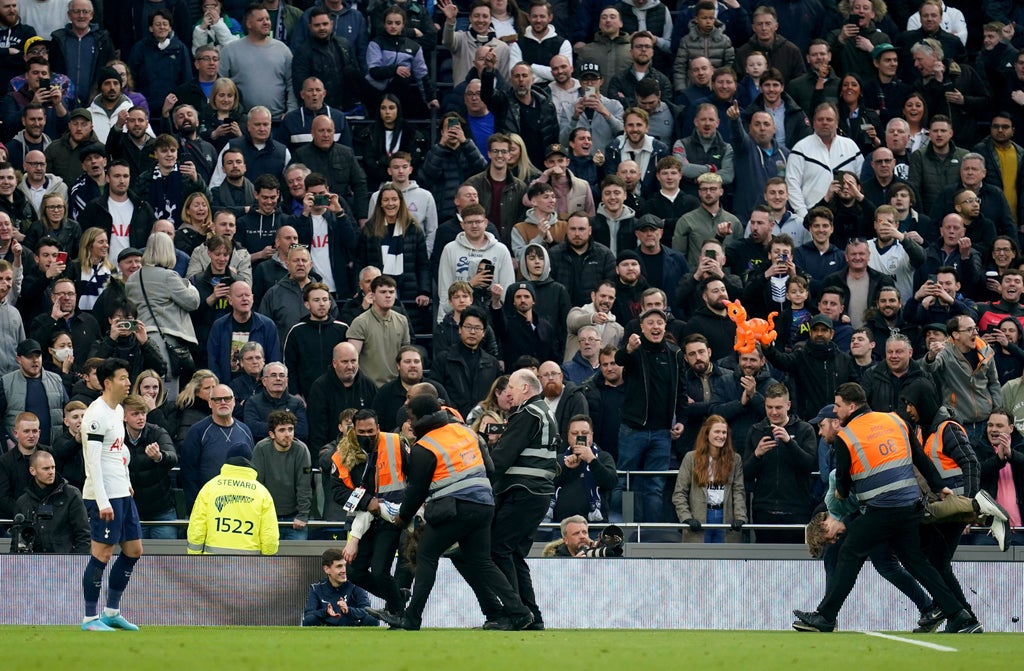 Before Nathan McGovern took to the pitch to disrupt a major premier league game in the name of climate action last Sunday, the 22-year-old student found himself absorbed by another passion.

“I genuinely enjoyed the first half, it was a really good half of football,” he said, of the game between Tottenham Hotspur and West Ham. “I’m a massive football fan.”

The Coventry City supporter was one of several activists for the Just Stop Oil campaign that have disrupted recent football matches in an effort to get the government to halt new fossil fuel licensing and production. In another high profile action this month, coalition activists disrupted the BAFTAs, taking their campaign to the red carpet.

The action is timely with Boris Johnson expected to announce his energy security strategy next week. prime minister you have insisted that drilling for more North Sea oil and gas will not undermine the fight against the climate emergency.

A spokesperson for the Just Stop Oil coalition, a new movement formed in recent months, said there would be “nonviolent civil resistance” against a government that is “now harming us and our future by allowing new oil and gas.” The coalition is supported by a number of other groups including Extinction Rebellion and Insulate Britain, the spokesperson said.

Tactics used by these groups have in the past prompted criticism and even backlash from members of the public.

Mr McGovern, who said last Sunday was not his first run in with the authorities at a protest, said he had been concerned about alienating the sea of ​​spectators as he attempted to lock himself to one of the goal posts last week. After all, he said as a football fan he knew he was disrupting “the highlight of their week.”

But, with millions of people around the world dying each year from extreme temperatures and climate change expected to increase the number of deaths in the future, he said he felt compelled to act.

“That’s what keeps me up at night,” he said.

The Metropolitan Police said six people were arrested under the Football Offenses Act for being on the playing surface during a Tottenham Hotspur v West Ham United game on Sunday, 20 March. All were charged and will appear at Highbury Corner Magistrates’ Court on Friday, 8 April, the police said. Mr McGovern was among those charged.

A Master’s student in religion at King’s College London, Mr McGovern says he was drawn to the Just Stop Oil coalition in part due to the simplicity of its messaging. He described the fossil fuel industry as the “poster boy” of the climate crisis and said “everyone knows” it’s causing planet-heating greenhouse gas emissions.

“I see it as a domino effect, this is the first domino after which every single other one falls,” he added.

Last year, the International Energy Agency set out a road map for how to transition to a net zero energy system by 2050. Beyond projects commissioned in 2021, it did not include any new oil and gas fields. Later at the Cop-26 climate summit in Glasgow, countries agreed to “phase down” unabated coal power and inefficient fossil fuel subsidies.

Last month, a United Nations Science report found that if human-caused global warming isn’t limited to just another couple tenths of a degree, an Earth now struck regularly by deadly heat, fires, floods and drought in future decades will degrade in 127 ways with some being “potentially irreversible.”

Mr McGovern said he had initially been concerned about civil disobedience, but that over time he had seen the tactic work for other protest movements and had realized that the people taking action were just normal people like himself.

“We’re not just this bunch of ‘we-don’t-shower’ eco-warriors who live in the woods somewhere,” he said. “We’re ordinary people, like the people who go to football.”

The activist said he knew lots of the football fans had been annoyed by the protest, but he said he also thought some had understood and that his message had been received. Football, he said, was a central part of culture, and he was concerned that the climate crisis would mean games would be called off because of flooding or heat in the future.

“I hope to be able to get through to all of those fans,” he said, because they’re the people who are going to be affected or are already affected by the climate crisis.

As for what the protests could mean for him, Mr McGovern said he knows he risks ending up with a criminal record that would likely preclude him from traditional graduate jobs. But while that weighs on his mind, ultimately he says he’s more concerned about the climate crisis than his own job prospects.

His experience last Sunday has not deterred him. when The Independent contacted Mr McGovern on Friday he said he’d spent part of the day unfurling a banner highlighting the climate emergency outside his university.