The dismissed vice president Oriol Junqueras and the eight dismissed councilors have spent their first night in prison, after yesterday ordering the judge Carmen Lamela their imprisonment without bail for the crimes of rebellion, secession and embezzlement in a hard car.

The seven dismissed conselllers (Junqueras, Turull, Rull, Forn, Romeva, Mundó and Vila) entered the prison of Estremera, while the two dismissed councilors (Meritxell Borrás and Dolors Bassa) have done so in the women’s prison of Alcala Meco, both in Madrid.

Santi Vila will be released this Friday after having paid this morning the deposit of 50,000 euros imposed by the judge of the National Court, Carmen Lamela.

Meanwhile, Lamela will study this Friday if he dictates arrest warrant and surrender for the president Carles Puigdemont and the four dismissed councilors who accompany him in Brussels, while that same court decides whether to keep Jordi Sànchez and Jordi Cuixart in prison. The appeal hearing will take place behind closed doors in the second section of the Criminal Chamber. The Prosecutor’s Office is opposed to releasing them for “risk of flight, repetition of crime and destruction of evidence.”

Puigdemont’s Belgian lawyer, Paul Bekaert, said tonight that the Spanish justice has issued an arrest warrant European against his client and the four dismissed councilors. Bekaert told Belgian television VRT that Puigdemont considers that “the weather is not good at the moment to testify and it is better to distance yourself.” He added that, however, the president would be willing to work with the Spanish or Belgian courts.

The Belgian Federal Prosecutor’s Office has stated that it is on standby and that it will “apply the law” if the Spanish judicial authorities issue a Euro order.

The newspaper NOW publishes this Friday an opinion article by Junqueras entitled “working to win freedom” in which the dismissed vice president criticizes the “absolute complicity” of the PSOE / PSC with the PP in the application of 155. “Without the PSC, delivered body and soul to the PP, none of us would be in prison today, “he denounces.

In addition, it calls on the parties and entities to dedicate all their energies “to defend democracy, to organize a defense of civil and political rights, to work to win freedom, to continue working so that civil rights are respected. and politicians of each and every one of the citizens of Catalonia “. 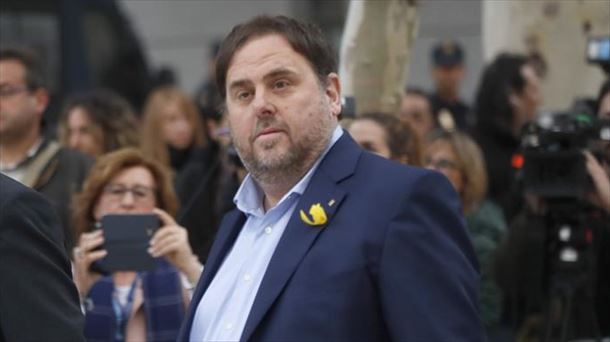 Junqueras, upon his arrival yesterday at the National Court. EFE

Call for a general strike for 8N

Several protesters have cut this morning the Gran Via of Barcelona as well as the A-2 and other secondary roads in Catalonia. The demonstrations have been called among others by Arran (youth of the CUP) to request the release of the dismissed members of the Government as well as the presidents of ANC and Òmnium Cultural.

In addition, a demonstration called by the Committee for the Defense of the Republic (CDR) of Sant Cugat (Barcelona) has interrupted the train circulation of the Barcelona-Vallès de FGC line as it passes through the municipality.

If not now, when? If not us, who? We take to the streets to defend the Republic and # Freedom from political prisoners! ¿ pic.twitter.com/gAU72ZWAyQ

Yesterday thousands of Catalans mobilized to protest against the sending to prison of the ceased Government. In addition to the numerous rallies held during the afternoon, starting at 10 pm, ‘caceroladas’ have taken place throughout Catalonia.

The Intersyndical-CSC has convened general strike in Catalonia for next Wednesday, November 8, in protest against the “regression of social rights” and the application of article 155 of the Constitution.

For its part, the Plenary of the City Council of Barcelona has demanded this Friday the “immediate release of all political prisoners that they are despite having always acted peaceful and democratically, in accordance with the mandate from the ballot box, “approving an institutional statement signed by BComú, the Democratic group, ERC, the CUP and the non-attached councilor, Gerard Ardanuy (Democrates).