The full appointment of the deputy general of Gipuzkoa It is held today, Friday, in the Gipuzkoan General Meetings, pending the closing of the Government agreement between PNV and PSE-EE this week.

Markel Olano, PNV candidate for general deputy of Gipuzkoa, has set quality employment, the competitive economy of the future and the protection and social justice system as “main tasks” of his third consecutive legislature at the command of the Provincial Council.

Predictably, Olano will obtain the support of the absolute majority of the Guipuzcoan Provincial Chamber in the vote of the full investiture, thanks to the votes of the PNV and the PSE-EE.

Olano stressed that Gipuzkoa is in a “positive” situation, and has announced “a new agenda” and “new ways of doing politics.”

“We have closed a fruitful legislature and we are back with strength, with a number of new ideas and projects,” Olano declared in plenary session.

The candidate has assured that, during the last legislature, “we have kept our word.” “Four years ago we set ourselves a really ambitious goal: to build a strong territory, with an advanced economy and a cohesive society,” he explained.

Olano has assured that he will be “by the side of the companies” in a context of “political instability, trade war and the threat of a slowdown”, for which he has announced that they will work to stimulate new economic activity and improve the quality of employment .

In turn, the jeltzale candidate has defended “a fair, equitable and progressive fiscal policy.”

Olano has also referred to social policies, to promote “cohesive coexistence” and that “no one is left out of the welfare state.” As a measure to respond to the aging of the population, for example, it has announced the construction of four new residences, creating 500 new places for the elderly.

EH Bildu has introduced Juan Carlos Izagirre as a candidate for general deputy. In his government program, the nationalist candidate has opted for “building a more just society.”

To this end, Izagirre has highlighted the importance of “distributing the wealth that is generated well, having public services that ensure people’s dignity, ensure decent working conditions and pensions, work to balance economic sectors and guarantee the rights of everybody”. 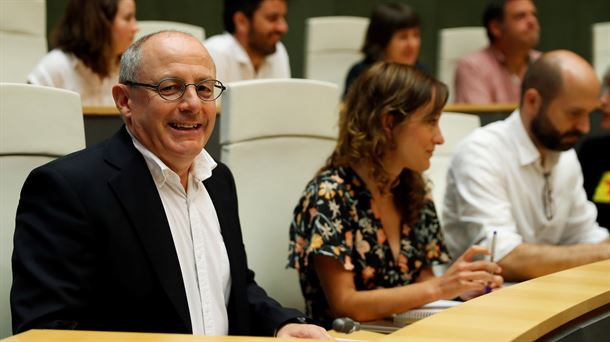 Proclamation of the deputy general

After the interventions, the junteros have taken a recess after which the junteros groups will intervene from the lowest to the highest representation obtained in the last elections. After the turn of reply of both parties, candidates and group, the session will be suspended again, setting the time at which it will resume.

Afterwards, the name from which the roll call and ballot voting will begin will be drawn, and the vote will take place, the first with an absolute majority and the second, if necessary with a simple majority.

Finally, Markel Olano will be proclaimed as the new Deputy General of Gipuzkoa and he will be delivery of the scallop and the cane corresponding.

eitb.eus broadcasts the plenary session for the election of the general deputy of Gipuzkoa, live