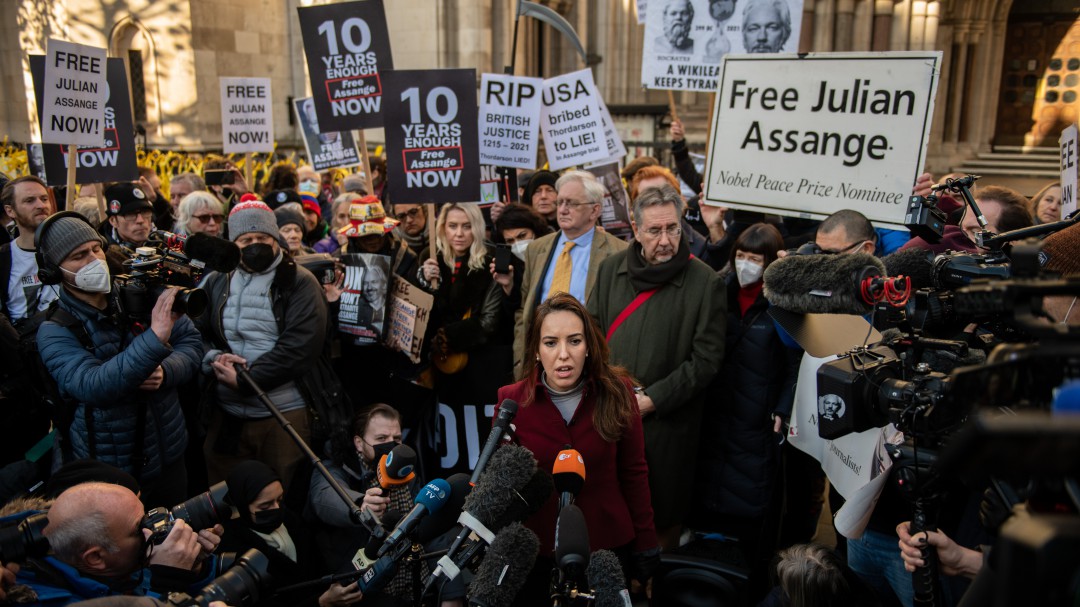 The founder of ‘WikiLeaks’, Julian Assange, had a stroke in October when he was in the Belmarsh maximum security prison where he is being held, his fiancee Stella Moris has revealed, after knowing this Friday that his extradition to the United States has prospered.

Assange, accused of espionage and with a possible sentence of up to 175 years in prison behind him, would have suffered a stroke on October 27 during a video appearance in the open process with the Supreme Court of the United Kingdom on his extradition. Since then, he has undergone an MRI and receives medication to treat himself for the serious injuries that have caused his stay in prison, Moris has denounced in an article published in the ‘Daily Mail’.

“Look at the animals trapped in cages in a zoo. They shorten their lives. That is what is happening to Julian. The endless court cases are extremely stressful mentally,” said his fiancée in the British newspaper, which has also highlighted that in the maximum security prison “he lacked fresh air and sunlight, an adequate diet and the stimuli he needs.”

The Justice of the United Kingdom has endorsed this Friday the appeal presented by the United States to extradite the founder of ‘WikiLeaks’ to the North American country. The Court of Appeals has reactivated the process, considering that there were health reasons and a high risk of suicide for the accused in the event that the extradition went ahead.

Since he was not in a medical condition to attend his own trial via video link. How can they even argue whether he is fit to be exposed to a ‘show trial’ in the United States, a country that is refuses to prosecute its torturers and war criminals? “Reacted the UN rapporteur who examines cases of cruel or degrading torture and punishment, Nils Melzer, in a video posted on his social networks.

“It was not well”

Journalist Kevin Gosztola, who has reported on Assange’s extradition, has expressed on social networks that “(during the hearing) he was not well and also the prison forced him to go to the video room, where several journalists, including myself We saw how bad it was. ” Assange, Moris denounces, due to stress was left with a drooping right eyelid, memory problems and visible neurological damage.

The decision is a serious blow to the activist and programmer, although his legal team is studying to appeal the ruling. Upon hearing the news, Moris expressed that it was a “serious judicial error” and emphasized that the extradition is “abusive” and “vindictive”: “It must have been horrible to hear an appeal before a court in which you cannot participate. , which discusses your mental health and your risk of suicide and in which the United States argues that you are making everything up, “he criticized.

Dozens of groups call for freedom for Assange

For its part, the International Federation of Journalists (IFJ) has condemned the ruling and clarified that “it will support any legal recourse presented by the Assange team.” In a statement, he indicated that the case will be brought before the United Nations and has thus joined dozens of groups that have requested the British Government to release the activist.

“This comes from behind. These are discussions that stem from events in 2010 and 2011 of which Chelsie Manning was convicted of passing information to ‘WikiLeaks’. This has not been something that ‘WikiLeaks’ has published on its own. ‘WikiLeaks’ is allied with the ‘New York Times’, with ‘Der Spiegel’, with ‘The Guardian’ and all those newspapers were awarded for covering war crimes that the military of the United States and the United Kingdom committed in Iraq and Afghanistan, “he said. In a video published by the portal ‘Democracy Now’, the director of the American Union for Civil Liberties and lawyer for Edward Snowden, Ben Wizner.

In the same terms, the former Australian minister, Kevin Rudd, who has published on social networks that he “completely disagrees with the persecution” has spoken: “In a nutshell: if Assange’s crime was to disseminate classified national security documents, what The same would apply to the editors of all British, American and Australian newspapers that published the material. “

The defense had already been warning that his health had seriously deteriorated in recent years. Trial court judge Vanessa Baraitser had deemed it proven that Assange had self-harmed and had suicidal tendencies. “The general impression is that of a depressed and sometimes desperate man who fears for his future,” he said in January when issuing his sentence.

Baraitser, however, was already rejecting the legal arguments presented by the defense, including the doubts expressed about the possibility that Assange was not subjected to a fair trial in the United States.