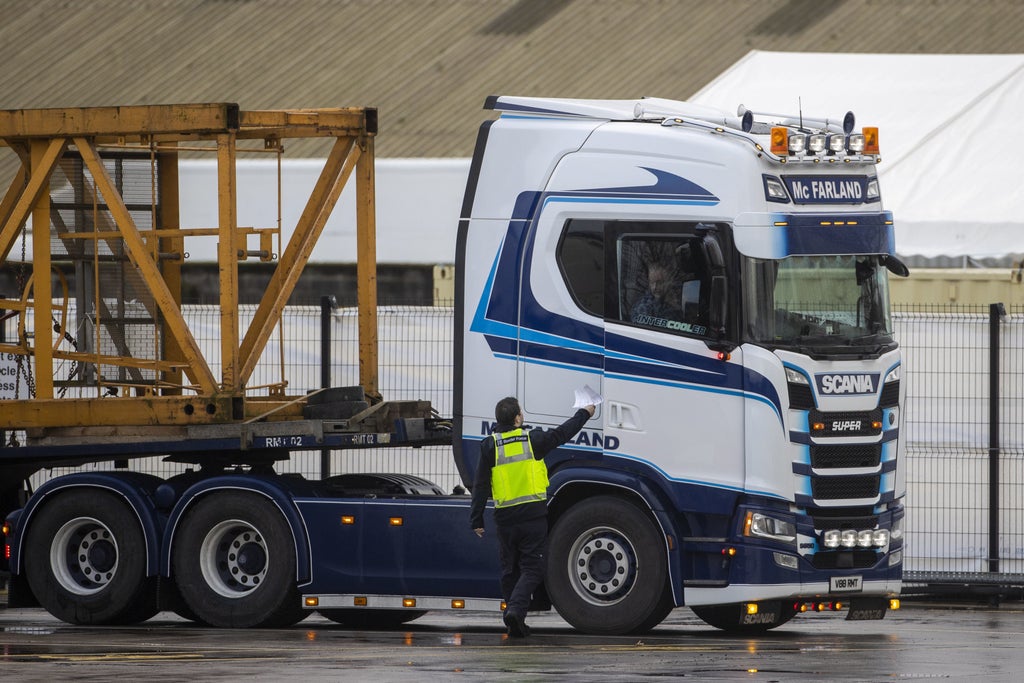 A High Court judge has issued an interim order suspending a decision by agriculture minister Edwin Poots to direct a stop to Brexit agri-food checks at Northern Ireland ports.

The temporary direction will be in place until judicial review against the DUP minister — who acted unilaterally this week to order a halt to port checks required under the Northern Ireland Protocol — can be heard in full.

Civil servants have yet to implement the instruction, pending legal clarity on their obligations, and checks are continuing.

Mr Justice Colton, who granted leave for applications for judicial reviews against the minister’s decision, said: “There shouldn’t be any confusion hanging over those in the civil service, so I am persuaded this is a case where there should be interim relief

“I therefore make the order to suspend the instruction given by the minister for agriculture until further order of this court or completion of these proceedings.”

The judge pointed out that the checks had been ongoing for more than a year and that the order to halt them had been brought at short notice. The full judicial review is expected to be heard next month, but a barrister for the Department of Agriculture told the court that their position was that the direction by Mr Poots was “entirely lawful”.

It comes as Sir Jeffrey Donaldson, the DUP leader, claimed that Boris Johnson privately told him there was a “20 to 30 per cent change of agreement” between London and Brussels over a new deal for Northern Ireland in the coming weeks.

Speaking on BBC Radio Ulster, Sir Jeffrey said he asked the prime minister last week “what he though were the prospects of agreement being reached with the EU on the Protocol within the next few weeks. I added: “His answer from him was ’20 to 30 per cent chance of agreement’”.

Sir Jeffrey also warned the DUP would have difficulty reforming a Stormont executive after the upcoming Assembly election if issues with the Northern Ireland Protocol are not resolved.

I have expressed doubts about the prospect of a short-term return to a fully-functioning returned administration in the wake of the dramatic resignation of his party’s Prime Minister Paul Givan.

Sir Jeffrey’s decision to pull Mr Givan out of office is part of the DUP’s escalating protest strategy against the post-Brexit trading arrangements that have created economic barriers between Northern Ireland and the rest of the UK.

Mr Givan’s resignation, which came into effect at midnight, automatically removed Sinn Fein deputy prime minister Michelle O’Neill from her position. Other Stormont ministers can remain in post but the Executive can no longer meet and is unable to make significant policy decisions.

An Assembly election is already scheduled for May and Mr Givan’s departure raises the prospect of that poll being brought forward several weeks.

A fully functioning administration could only be formed following the election if the positions of first and deputy first ministers are filled by the largest unionist and largest nationalist parties.

Sir Jeffrey suggested the DUP would only return to an executive if its concerns around the post-Brexit trading arrangements are addressed.

“I have made my position clear – I think there is now an opportunity for the Government and the EU to step up. The EU consistently said that the purpose of the protocol was to protect the political institutions, political stability and the Good Friday Agreement.

“Well, we know that isn’t happening because unionists do not consent to the protocol. There is no consensus for the protocol.

“There is now an opportunity for the UK Government and the EU to step up to the mark and to deliver an agreement that resolves these issues that can be done quickly.”