The judge of the National Court Carmen Lamela has decreed unconditional imprisonment without bail for the former Catalan vice president Oriol Junqueras and for seven dismissed councilors of the Government, while a guarantee of 50,000 euros has been placed on the dismissed director Santi Vila to be able to get out of jail.

In this way, the judge fully assumes the request of the Prosecutor’s Office and sends Junqueras and the eight dismissed counselors who have appeared before the judge to jail for risk of escape and criminal repetition.

The judge has appreciated a high probability of flight risk because “neither can the purchasing power of the defendants be forgotten, which allows them to easily leave Spanish territory and subsist abroad.”

Lamela thus alludes to the flight of the Catalan president Carles Puigdemont and four other councilors who were dismissed from Belgium. “At this point, it is enough to recall the fact that some defendants have already traveled to other countries avoiding the criminal responsibilities that they may have incurred,” the order highlights.

Lamela also observes in his car a high risk of criminal repetition, taking into account that the “criminal activities described have been consciously planned and carried out by the defendants for more than two years” since the process of prosecution began in 2015. independence in Catalonia.

Lamela says that those investigated “have been operating within a perfectly organized group of people, supported by sovereignist associations with the power and capacity to assist them in their possible escape from justice.”

All of them played “an active role in promoting the carefully designed sovereign process and crossing all kinds of barriers” that could divert them from their ultimate goal.

“The action of the defendants was considered and perfectly prepared and organized, reiterating for more than two years the systematic non-compliance with the Constitutional Court resolutions” regarding the independence process, he adds.

To argue the unconditional imprisonment, it also indicates that there is a high probability that the defendants may proceed to hide, alter or destroy evidence sources, taking into account the positions they have held until a few days ago.

Lamela has thus assumed the requests made by the Prosecutor’s Office in this regard during the visit held for the adoption of precautionary measures after taking statements throughout the morning from these 9 investigated for rebellion, sedition, embezzlement and other related crimes.

On the other hand, the Prosecutor’s Office of the National Court has requested Judge Carmen Lamela to issue a European Arrest and Surrender Warrant (OEDE) against the President Carles Puigdemont and the four dismissed directors who have not attended their summons today for rebellion, sedition and embezzlement, legal sources have reported. 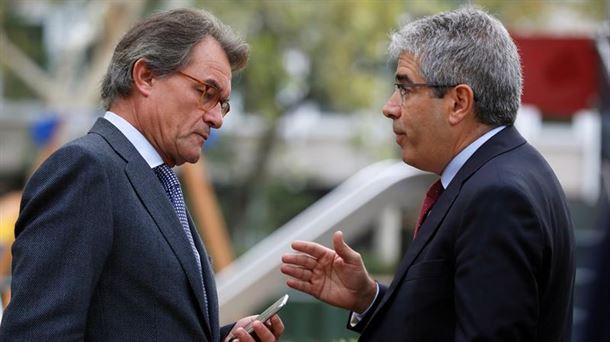 Several Catalan leaders have moved to Madrid to support the defendants among which stand out the president Artur Mas; the general coordinator of PDeCAT, Marta Pascal; the general secretary of ERC, Marta Rovira or Albano-Dante Fachín, general secretary of Podem. Some 50 political positions make up the delegation transferred to Madrid to support the defendants. In addition to those mentioned, there are ERC deputies Gabriel Rufián and Joan Tardá, or Unidos Podemos, Xavier Domenech and Alberto Garzón. The entourage welcomed the declarants with applause and the shout of “you are not alone.”