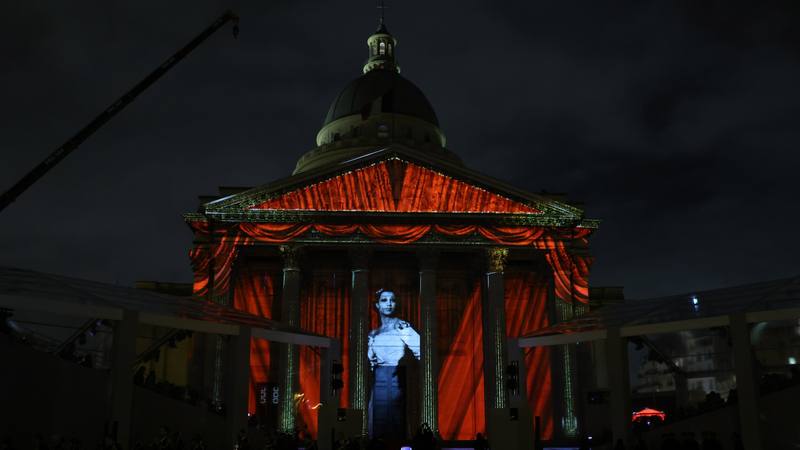 Joséphine Baker has become this Tuesday the first black woman to enter the Pantheon in Paris, destined to honor the great characters who have marked the history of France and where until now there were only 5 women among the 80 celebrities buried there.

The Gallic country has elevated Baker to the category of national heroine. Considered the first internationally successful vedette, Joséphine was a true revolutionary for her time: from very humble origins in the United States, her talent made her famous as a dancer and took her to Paris, where she collaborated with the French resistance against the Nazis and broke many molds by defend women’s rights and fight against racial discrimination.

His cenotaph (a coffin that does not contain the body), carried by soldiers of the air force, of which he became a second lieutenant during World War II, entered the Pantheon at around 6:30 p.m. The coffin, which did not contain his remains, since will remain in the family pantheon in Monaco, was first carried down Soufflot Street on a huge red carpet in front of 8,000 spectators, according to the Elysee.

Before entering the Pantheon, a video was projected on the façade illustrating the singer’s life, from the Parisian stage to her speech with Martin Luther King at the March on Washington in 1963. After the broadcast of her most popular song famous: ‘J’ai deux amours, mon pays et Paris’, the cenotaph, covered with the French flag, has entered the secular necropolis forty-six years after the artist’s death in 1975, where it will remain overnight.

On Wednesday, during a family ceremony, he will be installed in vault 13 of the crypt, where the writer Maurice Genevoix, who entered the Pantheon last year, is already buried.

“A committed woman who followed her ideas to the end”

Nine of his twelve children were present at the event, excited and happy for this recognition. “I would like people to discover that my mother she was not only an artist, but also a committed woman who followed her ideas to the end. I hope that your messages of tolerance and openness to others be heard by the French, “said Marianne Zinzer, one of his daughters.

Joséphine Baker had to fight her whole life. Born in Saint Louis, Missouri (USA), into a poor family, her mother put her in the service of a white lady who mistreated her. At the age of 14 he had already left school to make a living singing in the street and had married. After going through different traveling companies and on Broadway, they offered to set up a ‘Black Magazine’ in Paris.

Lights in the Night – Josephine Baker

Her appearance at the Theater of the Champs-Elysees dancing, with her bare chest and a minimal skirt made of bananas, a mixture of Charleston and a pseudo-tribal dance captivated the audience. “A cartoon of the domesticated savage, but she was not only that “, says the director of the documentary ‘Josephine Baker: The story of an awakening’ (2018), Liana Navaro.

The ‘Black Nefertiti’, as Pablo Picasso called her, or ‘the ebony goddess’ won over the French public: “She was like Beyoncé today. The most photographed person in the world“, explains Navaro.

“A combatant who sings”

“It is France that has made me what I am and I will be eternally grateful to her,” said Baker, who obtained French nationality on November 30, 1937. When the Second World War broke out, instead of returning to the United States , the artist decided to join the French Resistance.

“Baker was very attached to her military status, she wanted to be recognized as a combatant who sings rather than as a singer who fights,” emphasizes Navaro. He became a second lieutenant in the Free French Air Force after spending the war passing on secret messages.

After the war, he returned to the United States to fight racism and formed a “rainbow family” by adopting children of different racial backgrounds. His entry into the Pantheon in Paris is a message from Emmanuel Macron at the height of the extreme right and hatred towards immigrants: “Joséphine Baker enters here with all those who chose France,” he said after having defended that he took “in each turn of history the right decision, always distinguishing the light from the darkness “.

“The fact that the President of the Republic has decided to include it in the Pavilion of the Illustrious French is a strong signal in our country, which is in prison of the withdrawal on itself,” said Elisabeth Moreno, Minister of Equality between Women and Men , Diversity and Equal Opportunities. “More than any other, she embodies our plural France, a France that loves freedom and is not afraid to mix and open up to others “, he remarked.