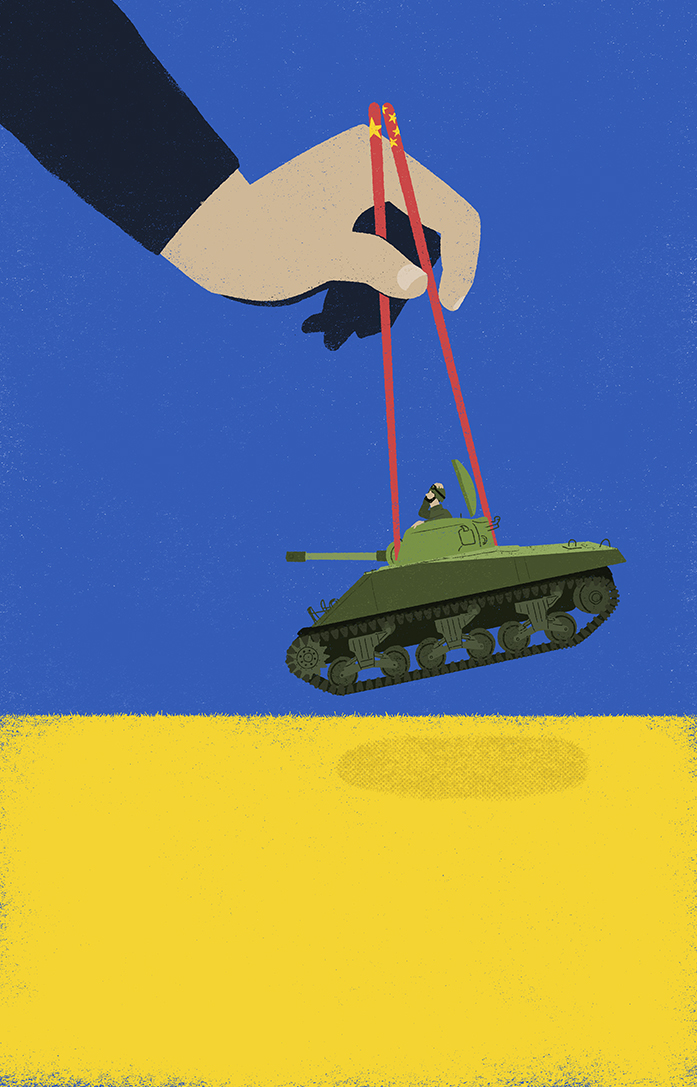 The Chinese race towards world hegemony has its goal in 2050. A goal that since the start of the pandemic has made the Asian giant quicken its pace. For this, it has numerous allies. Among all, Russia is the main one. Especially now, when the warlike tension between this country and Ukraine places us on the brink of the abyss. The question is obvious: will we fall into it? To get the answer right, we must first warn that we are witnessing a conflict that is part of another background that China and the United States are waging on various fronts around global leadership.

Ukraine is now one of those points of friction between the two superpowers, although China does not make it explicit. This circumstance means that we are facing a conflict that can hardly lead to a Third World War. Why? Because China is not interested and does not contribute anything to its goal of achieving hegemony by force of economic, commercial and technological facts. And, although Russia has its own interests, they do not act separately from the Chinese. In fact, a fundamental part of Russian power rests precisely on geopolitical assets that are in tune with China’s interests. Something that must be kept in mind if you want to correctly assess the risks that weigh on the Ukrainian crisis.

We must remember that we are facing a new episode in the series of tensions that have been unfolding before our eyes in recent months. Some will say years, if we also include the Syrian conflict and the one recently experienced between Armenia and Azerbaijan, although in these cases powers with agendas related to each other and in conflict with each other intervene, as is the case with Turkey, Iran, Saudi Arabia and Israel. In any case, since the hasty departure of the United States from Afghanistan we have been facing an update and resignification of the centenary Great Game that strained Anglo-Russian relations for a century.

Central Asia is once again gaining global importance due to the New Silk Road which, since 2013, has been the main strategic commitment of an economic nature and international cooperation promoted by Xi Jinping. Why? Because it intends to communicate China with the market that is most relevant to its interests. It should not be forgotten that the Chinese believe that if they can control it, it will give them a decisive advantage over their American competitor. First, because Europe is still the largest economy on the planet. Second, because Europeans enjoy levels of prosperity and education higher than any other region in the world. Third, because these circumstances result in an exceptional ecosystem of data, industry 4.0, technological infrastructures and applied innovation, which is essential for the development of the race towards artificial intelligence. And fourth, because since the second quarter of 2021, China has been Europe’s main trading partner, displacing the United States. A feat that now needs to be consolidated to increase the dependency of the Old Continent on the Asian markets controlled by Beijing.

Here is the key to the background that must be put on the table of the reality that leads us to Ukraine and the gas pipelines that show the energy dependence of central Europe on Russia. Since the Afghan withdrawal in the summer of 2021, conflicts have been taking place that put the New Silk Road that connects Shenzen and Hamburg at risk. Thus, the migratory shock of Poland and Belarus in November; the concentration of Russian troops on the Ukrainian border since December; the incidents in Kazakhstan in January this year or the Swedish military reinforcement on the Swedish island of Gotland a few days ago have ended in the crossing of threats personified by NATO and Russia since last week.

We are talking about a series of geopolitical earthquakes that reveal the extraordinary strategic value of a land communication route that links the Baltic and the China Sea in 15 days, while maritime circulation takes 20 more days. Hence, China will not allow its Russian ally to cause a military incident with unforeseeable consequences, similar to the one that triggered the assassination of an archduke in Sarajevo. China has too much to lose and little to gain if things get out of hand in Ukraine.

In this sense, it will not prevent Europe from weakening a little more and its internal contradictions from aggravating in order to increase its influence over it. Nor will he object to destabilizing the transatlantic relationship, stirring public opinion in the United States and undermining his credit among the former Soviet republics. But from there to allowing Russia to provoke a large-scale war that compromises its future strategic interests, there is a step that China will never take. The United States has an overwhelming military advantage over the Asian giant. At least for a decade. Provoking an incident that makes real what Graham Allison described in 2015 as the Thucydides trap is a risk that China will not take.

His project to achieve world hegemony would not survive a misstep that would lead the United States to take advantage of its military superiority, which is what Sparta did with Athens in the Peloponnesian War that Thucydides relates. An error of this caliber would end Xi Jinping’s leadership and delay the Asian superpower’s bid to conquer leadership with commercial and digital weapons. Why commit him to a risky bet if the United States is slowly showing signs of fading in the race it has with China?

The Asian giant, increasingly Confucian than communist, knows that things must mature by themselves and not force them. To do this, it must consolidate control over Central Asia and its adjacent territories: the Middle East and the Caucasus. To achieve this, he needs Russia to play the role of centurion of Beijing’s interests in the aforementioned New Silk Road. A project that updates Halford Mackinder’s theses and his idea that planetary hegemony is subordinated to control of the territory that goes from the Volga to the Yangtze.

The Ukrainian crisis needs to deploy this strategic overview to fully understand what are the interests involved and where are the risks that operate on it. The biggest is European weakness and the chain of humiliations that Europe and the United States have forced on Russia in recent decades after the collapse of the former Soviet Union. The German and North American effort to bring European interests to the Don after 1990 is also at the origin of the current situation. The same as the support for the orange revolution and now the desire to expand NATO at the expense of Russian strategic interests in the region.

Europe has believed that it could increase its geopolitical power without seeing it supported by an autonomous and more cohesive military force, as well as by greater, more solid and cheaper energy autonomy. Let us hope that this crisis does not turn it into the battlefield of a hybrid war that uses energy to block its economic recovery and that, by the way, opens internal conflicts that show that, just as the Ottoman Empire was Europe’s sick end of the 19th century, now the Old Continent becomes the 21st century. I’m afraid he wouldn’t survive the division sickness either.

Jose Maria Lassalle he was Secretary of State for Culture between 2011 and 2016 and for Digital Agenda between 2016 and 2018, and is the author of wounded liberalism (Harp).