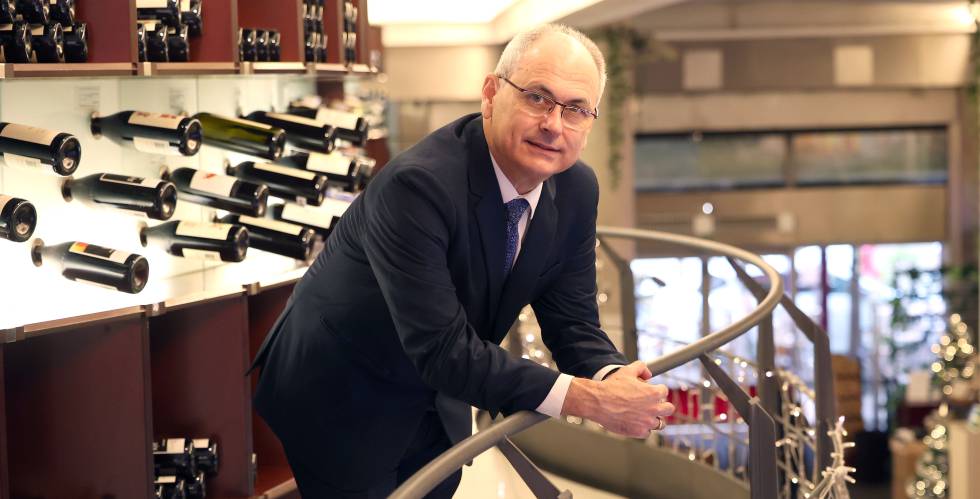 He warns that his birthplace is merely circumstantial because he grew up in Logroño. José Luis Lapuente (Miranda de Ebro, Burgos, 1964), studied Icade in Madrid, besides being a real estate agent, he was intern at the mythical consulting firm Arthur Andersen, was deputy to financial management at Bose Products BS, as well as head of budgeting and reporting at Johnson & Johnson, in addition to controller at Janssen Pharmaceutical. Although his professional destiny marked him, according to account, his marriage to a woman from La Rioja, and that in his life project he was always not to lose sight of returning to La Rioja. He started working at Bodegas Rioja Santiago, where he made contact with the Barrio de la Estación, unique enclave where the wineries of Señorío de Rioja are located. Since 1998, he has been a member of the Rioja Denomination of Origin Regulatory Council, with executive functions since 2013. They are in charge of certifying Rioja wines, as well as their promotion and defense of their reputation.

What tasks have you tackled?

In these years we have experienced different revolutions. When I arrived there were no personal computers, and I was surprised because I came from a world with more technological advances. With technology, the Council was transformed with a public profile, and with projects that were not mechanized. For example, at harvest time in 60 days in Rioja 100,000 operations are carried out, from the grapes to the entire production process are controlled, and until 2006 all this was done manually. Now it seems unthinkable to us that at that time there could not be magnetic cards or have all the information in real time. Rioja has lived through some very interesting years, and it is in the 90s when the first development begins, especially international, sometimes slowed down by the economic and health crisis, but with increasing development.

What topics are you emphasizing the most right now?

All hopes are pinned on the international market.

The Spanish market is not growing and in the international market there are many opportunities. Regarding external magnitudes, Rioja represents 41.6% of the value and 34.5% of the volume. All of this is part of our strategic plan. We have developed a road plan with KPMG and we have set ourselves to reach 44% in terms of foreign marketing. Before the pandemic, the percentage was 37%. Our sales in 2020 were 322 million bottles, of which 56%, 179.4 million, corresponded to the national market, and the rest abroad. And the objective is to lower the weight of the national market. The countries where we have the greatest weight are the United Kingdom, Germany and the United States.

How is Brexit affecting wine?

For the moment, the commercialization is being positive. What has penalized him has been the prior uncertainty until reaching the final outcome. In 2020 and 2021, the behavior has been positive. The uncertainty is lethal. We thought that our big problem was to maximize all Rioja decisions, to focus on the origin, on village wines, on wine tourism, which led us to have 860,000 visits. We have a suitcase full of resources and we need the tailwind because we are faced with the slowdown in China, which stopped growing at rates of 7%, and abroad we had the United Kingdom, with the uncertainty of knowing what the outcome was and how was the closing of doors or tariff barriers. All that generated unease.

Now they live a delicate moment regarding the division in Rioja with respect to the new designation of origin of Álava.

We have received with great satisfaction the withdrawal by the PNV of the legislative proposal that would have led to the fragmentation of the appellation of origin. The regulatory council has stated, once again, that all kinds of political interference must be avoided and debates must be held within the sector. Precisely, the one that refers to this withdrawn approach was already upheld in July 2020 and forcefully rejected. Our denomination of origin is a model of success, it is unique and in its uniqueness it finds its strength without prejudice to contemplating sufficient specificities to accommodate all its realities.

What goal do you have for next year?

Our purpose is to go to prepandemic conditions and we are about to achieve it. We need 2022 to be normal. We would like to erase the previous two years, but we have learned the value of the word resilient, of what you have to do to reinvent yourself, to seek household consumption, to sell door to door. We have to look for the future. And the good thing is that we know how to suffer to take a step forward. This is a business that must be felt, that must be understood. It is a business that has no ceiling and the one that is governed only by the numbers ends up short-circuited.

Is there room for new wineries in Rioja?

Yes, anyone can enter by meeting the requirements. There is no restriction, although you cannot plant vineyards where you want, but there are new projects in facilities that already existed. Small businesses of entrepreneurs emerge.