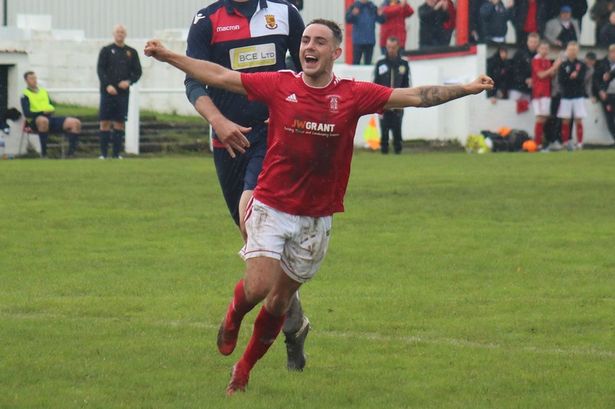 Most managers would be daunted heading into a crucial game against a team yet to taste defeat in the league in 22 matches.

But Johnstone Burgh boss Jamie McKim isn’t fazed in the slightest because he believes his side has what it takes to finally dish out a first domestic defeat on high-flying local rivals Arthurlie.

The Barrhead side are currently in pole position to lift the Conference A title, sitting four points ahead of nearest challengers Shotts and still enjoying two games in hand on the North Lanarkshire club.

But Johnstone Burgh head into tomorrow’s clash at Keanie Park on an impressive 11-match unbeaten streak of their own and know a derby win would be a huge boost to their own hopes of staying in the top four and securing a promotion spot into the second tier next season.

While acknowledging Arthurlie’s incredible run, Burgh boss McKim insists his side have what it takes to end it if the Johnstone side play to their full potential.

McKim told Express Sport: “Arthurlie are a very good side, let’s be honest.

“You don’t get to this stage of the season unbeaten without being a very strong outfit.

“I have no doubt they’re a great side, but I believe we can beat anyone on our day.

“We have a great defence, strong midfield and we’re dangerous going forward. If we play to our potential we can beat them.

“My hope is that they take us lightly. It’s easy to become a bit complacent when you’re winning every week.

“They haven’t had it all their own way in recent weeks though, having been put out of two cups by Rob Roy and Bonnyrigg.

“That’s a couple of sore defeats and hopefully we can put some pressure on them at our own place.

“It’s a derby and if we turn up we can certainly come away with all three points, I have no doubt in my mind about that.”

Arthurlie secured the bragging rights earlier in the season when the teams clashed at Dunterlie Park.

Burgh were ravaged by injury and coronavirus absentees at that point, and McKim is looking forward to seeing how the pair match up with an almost full strength team.

McKim said: “The last time we played Arthurlie we were seriously down to the bare bones.

“We were missing big players in key positions, so I’m excited to see how we fare against them with a much stronger squad.

“We’ll be missing Jojo Gillespie and Jordan Mutch through suspension, but apart from that we’ve got a clean bill of health.

“Hopefully that can be a leveller this time around.”

Also in Burgh’s favor is the venue, with tomorrow’s clash kicking off at Keanie Park at 2pm.

The Johnstone club have had a vocal support home and away this season, and McKim is hoping for another big turnout given there are no professional domestic fixtures due to the international break.

McKim added: “It’s definitely a boost having the game at our place.

“We’ve had a great, noisy support this season and that gives the players a real lift.

“Hopefully they’ll be out in their numbers and we’re hoping for a good crowd in general with the likes of St Mirren, Celtic and Glasgow all not playing this weekend.

“We were disappointed to draw with Craigmark last weekend when they equalized right in the last minute.

“That would have made a big difference to our position on the table.

“Three points against Arthurlie would definitely make up for that though and I fully believe we can do that on Saturday.”