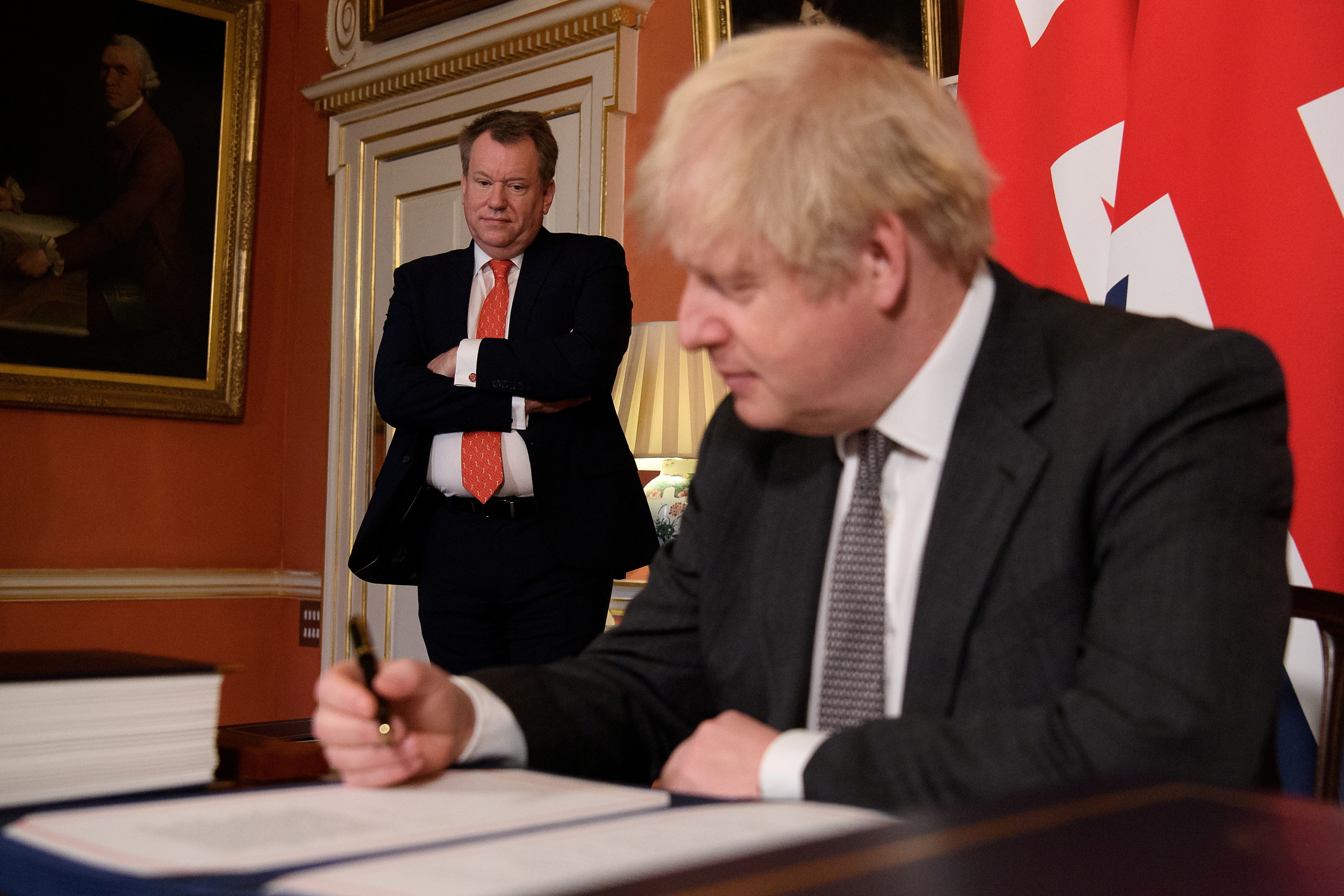 The politician in whom Boris Johnson put all confidence to negotiate the conflictive parts of Brexit with the European Union, David Frost (56 years old), has decided to leave his post to express his opposition to the current drift of the British Government. As advanced this Saturday late at night by the tabloid newspaper Daily Mail. Frost, a conservative turned into a furious eurosceptic and a man loyal to Johnson, has dealt with his announcement a huge blow to a prime minister who was already living his lowest hours these weeks.

Frost, whom Johnson has convinced to hold in his post as Minister for EU Relations until next January, has not decided to leave the government because of Brexit. His reasons, stated in a resignation letter he sent to the prime minister last week, have to do with the Downing Street measures that have most irritated the tough and neoliberal wing of the Conservative Party in recent weeks: the tightening of social restrictions to face the threat of the omicron variant; the already decided increase of some taxes and the one announced for others; and the rigid economic policies committed by the Johnson Administration to achieve the goal of carbon dioxide neutrality by 2050.

Frost’s output has a double reading. On the one hand, the fact that the man Johnson put at the helm of the Brexit negotiations to maintain the flame of that crusade threw in the towel is a new sign of the crisis that the current British Government is going through. In addition to the hesitant responses to the omicron threat, which have sparked an internal rebellion of nearly 100 Conservative MPs against Johnson, is added the enormous erosion of the prime minister’s political credibility with the issue of banned parties in Downing Street during the confinement or the dubious expenses to decorate the Johnson’s apartment. In the North Shropshire constituency by-elections, held last Thursday, voters in a region deeply conservative for 200 years turned their backs on the government and voted overwhelmingly for the Liberal Democratic candidate.

The fanaticism displayed by Frost in his negotiations with the Vice President of the European Commission, Maros Sefcovic, over the conflicting Northern Ireland Protocol, were putting Johnson in a very delicate position. The last thing his government needed was a trade war with Brussels, at a time when the economy hesitantly comes off the blow of the pandemic and the frictions caused by Brexit itself.

Frost introduced dogmatic rigidity to the talks, including a last-minute demand that the EU Court of Justice (CJEU) cease to be the supervisory body for internal market rules in Northern Ireland. Brussels, which offered a generous relaxation of customs controls between Great Britain and Northern Ireland, never accepted Frost’s maximalist demand. The tension reached almost intolerable extremes, until London began to show signs of flexibility and compromise.

Last week, a senior official who had a telephone conversation with EU correspondents in London gave the signal that there was a shift in strategy. London was no longer going to demand, for the moment, the disappearance of the CJEU of Northern Ireland. It would focus, as Brussels had requested from the beginning, on solving the practical problems of customs controls and phytosanitary standards. Frost had to go out immediately to try to qualify — not to deny — information that left him in a delicate position. But the truth is that in his meetings on Wednesday and Friday with Sefcovic he confirmed a change in strategy that went against what had been his inflexible position during all this time.

See also  DWP benefits, State Pension payments and tax may change after the death of a loved one

“As if we no longer knew it, Lord Frost has decided to leave a government in turmoil. This country needs leadership, and not a weakened prime minister in whom its deputies and ministers have lost faith. Johnson has to apologize to the citizens and explain once and for all what his plans are, ”Jenny Chapman, Labor’s Brexit spokesperson, wrote on Twitter.

Unionist politicians in Northern Ireland, who have so far lobbied the Johnson government to unilaterally dispense with a protocol they have always seen as treason, have regretted Frost’s decision. “His resignation is an important moment for the Johnson Government, but it is a huge thing for all of us who believed that Frost would comply with Northern Ireland,” wrote Arlene Foster, the former leader of the Democratic Unionist Party, who resigned precisely because of the approval of the Protocol.

The treaty, a solution to prevent the lifting of a new border in Ireland that would reignite the conflict quenched by the 1998 Good Friday Agreement, kept Northern Ireland within the EU’s internal market. London has been delaying customs controls for months, which was required by an agreement signed by Johnson himself, as a necessary solution to achieve his long-awaited Brexit.

Sheku Bayoh inquiry: Ex-officer says she ran after being ‘overwhelmed by terror’