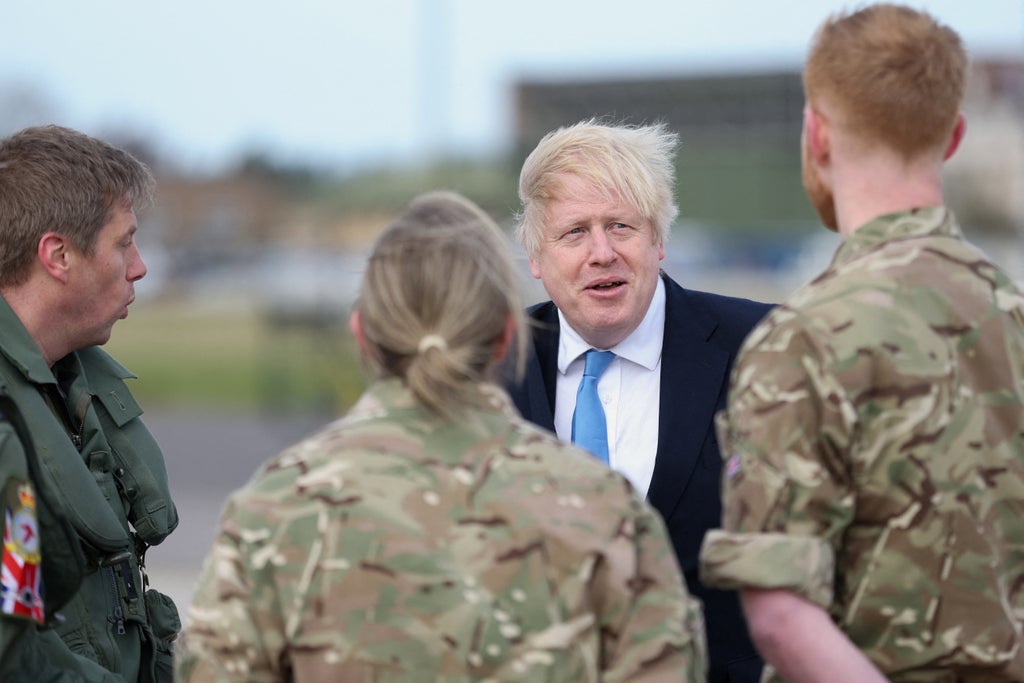 Boris Johnson has called for western leaders to unite against Vladimir Putin and show the Russian leader he will pay a “high price” if he sends his troops into Ukraine.

The Prime Minister will head to the Munich Security Conference on Saturday to make a plea for “unnecessary bloodshed” to be avoided by pursuing a diplomatic route to prevent a conflict in eastern Europe.

The annual summit comes against a backdrop of President Joe Biden warning that the US has reason to believe Russian forces “intend to attack” Ukraine in the coming days, including targeting the capital Kyiv – a city with a population of 2.8 million people.

Mr Biden told a White House press briefing on Friday he was “convinced” Mr Putin had “made the decision” to move his military across the border, having spent weeks saying he thought the Russian leader was undecided.

Only hours before his statement, the UK Foreign Office announced it had decided to “temporarily” move its diplomats out of Kyiv, relocating them to the west of the country.

The department said British embassy officials will relocate to Lviv, situated near the border with Poland.

With estimates that 150,000 Russian troops are posted around Ukraine’s borders, Mr Johnson has previously called the situation “very grim”.

But in comments made before embarking on his trip to Germany, the Prime Minister said “diplomacy can still prevail” if the West puts on a united front in terms of agreeing punishing sanctions to slap on Moscow.

“There is still a chance to avoid unnecessary bloodshed, but it will require an overwhelming display of western solidarity beyond anything we have seen in recent history,” he said.

“Allies need to speak with one voice to stress to President Putin the high price he will pay for any further Russian invasion of Ukraine.

“That is the message I will take to Munich today as we redouble our efforts to prevent a serious miscalculation which would devastate Ukraine, Russia and the rest of Europe.”

The Bavarian summit will take place against the backdrop of Mr Putin continuing to parade Russia’s military might.

The Russian defense ministry has announced it will be carrying out fresh exercises on Saturday involving its strategic nuclear forces.

Mr Putin will observe the drills involving multiple practice launches of intercontinental ballistic missiles and cruise missiles in a demonstration that Russia remains a nuclear superpower.

The Russian leader has insisted that the large-scale military exercises with Belarusian forces close to the Ukrainian border are “purely defensive” and do not represent a threat to any other country.

There are concerns among western allies that the Kremlin could use “disinformation” and a possible “false flag” operation to justify an offensive, particularly with growing activity in separatist-held areas of Ukraine.

Mr Biden said claims by Russian separatists that Ukraine is planning to launch an offensive into the battle-torn Donbas region “defies basic logic”, given the country is currently surrounded by foreign troops.

The US leader also said suggestions made in the Russian state media that a genocide is taking place in the Donbas were “phoney”.

Tensions in separatist areas have increased with reports of separate explosions in recent days.

Two explosions shook the rebel-controlled city of Luhansk early on Saturday, while another was reported to have occurred in the center of the city of Donetsk on Friday.

The Luhansk Information Center said one of the blasts was in a natural gas main and witnesses cited as saying the other was at a vehicle service station.

There was no immediate word on injuries or a cause.

Luhansk officials blamed a gas main explosion earlier in the week on sabotage.

The conflict between Ukrainian government forces and the separatists erupted in 2014 following the ousting of the pro-Moscow government in Kyiv and has killed more than 14,000 people.