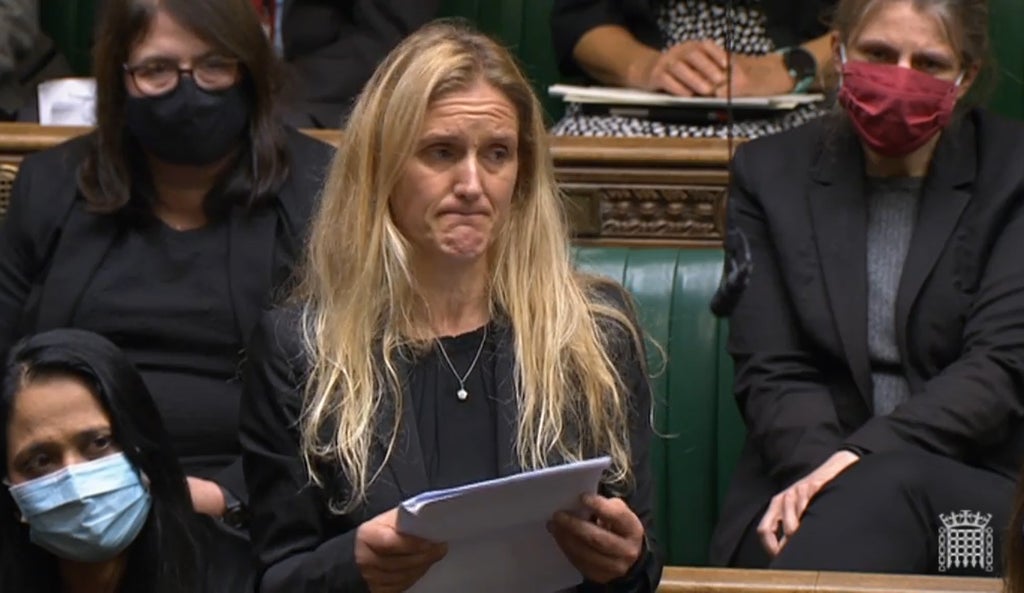 The sister of murdered MP Jo Cox has said she found the scenes of Sir Keir Starmer being rescued from a mob “really upsetting” but all Prime Minister Boris Johnson cares about is how to “save his skin”.

Kim Leadbeater, who is Labor MP for the same Batley and Spen seat her sister represented, joined the widespread criticism of Mr Johnson for his baseless claims about the Labor leader’s failure to prosecute Jimmy Savile when he was Director of Public Prosecutions.

speaking to Radio 4’s Woman’s Hourshe said: “I found yesterday really upsetting, it made me really angry, and we have to look at why it happened.

“And I think, ultimately, the individuals who were part of that angry mob have to take personal responsibility, but we also have to be clear that things don’t happen in a vacuum.

“And while ever we have a culture of toxicity and aggression and lies in politics, we have to think about the consequences of that.”

Ms Leadbeater added: “Words and that culture filters down to other people and it really concerns me that we have got a Prime Minister who seems to be stoking the anger that people feel in the country at the moment and that can have real repercussions for society .”

Ms Leadbeater’s sister Jo Cox was shot and stabbed in 2016 by a rightwing terrorist Thomas Mair during the EU referendum campaign. Mair called out “This is for Britain”, “keep Britain independent”, and “Britain first” as he attacked Ms Cox.

Kim Leadbeater, who became an MP in June 2021, reacted to the news that Keir Starmer had been mobbed by protesters on Monday, saying: “Words have consequences.”

She posted a message on social media, saying: “I’m incredibly angry and upset by the scenes we saw yesterday. I keep thinking about Keir and David’s families and friends. But these things don’t just happen. Words have consequences, leaders have a duty to behave responsibly and politics is not a game.

Tobias Ellwood, chair of the parliament’s defense select committee urged Mr Johnson to “apologise please”, adding: “We claim to be the Mother of all parliaments. Let’s stop this drift towards a Trumpian style of politics from becoming the norm. We are better than this.”

The Commons speaker Sir Lindsay Hoyle reiterated his criticism of the prime minister on Tuesday, saying his remarks last week were “inappropriate” and “only inflamed opinions”. He added: “Our words have consequences and we should always be mindful of the fact.”

Asked for her reaction to Downing Street’s insistence on Tuesday that the Prime Minister will not apologize for his remarks, Kim Leadbeater said: “I think that’s absolutely the wrong thing to do.”

She said: “I don’t think Boris Johnson is interested in listening to me. He didn’t welcome me to Parliament when I got the job.

“I’ve had very little to do with him. He did eventually write a note to me.

“But I don’t think Boris Johnson wants to listen to people like me.

“I think he wants to save his skin and he wants to make sure that he is still Prime Minister and, at the moment, it feels like that’s pretty much all he cares about. And I find that really sad.”

The MP said Mr Johnson had “disrespected victims of sexual abuse and he tried to score points.”

And she said: “We deserve better than that in this country.”

Ms Leadbeater said there was “a moral vacuum when it comes the current leadership of the country.”

She added: “Do we want to live in a country where we’ve got baying mobs harassing people in the street?”

Ms Leadbeater told presenter Emma Barnett how she texted her mother after seeing Sir Keir being escorted from the incident by police.

But she said her mother encouraged her to speak out despite knowing that it would fuel those who would respond negatively to her on social media.