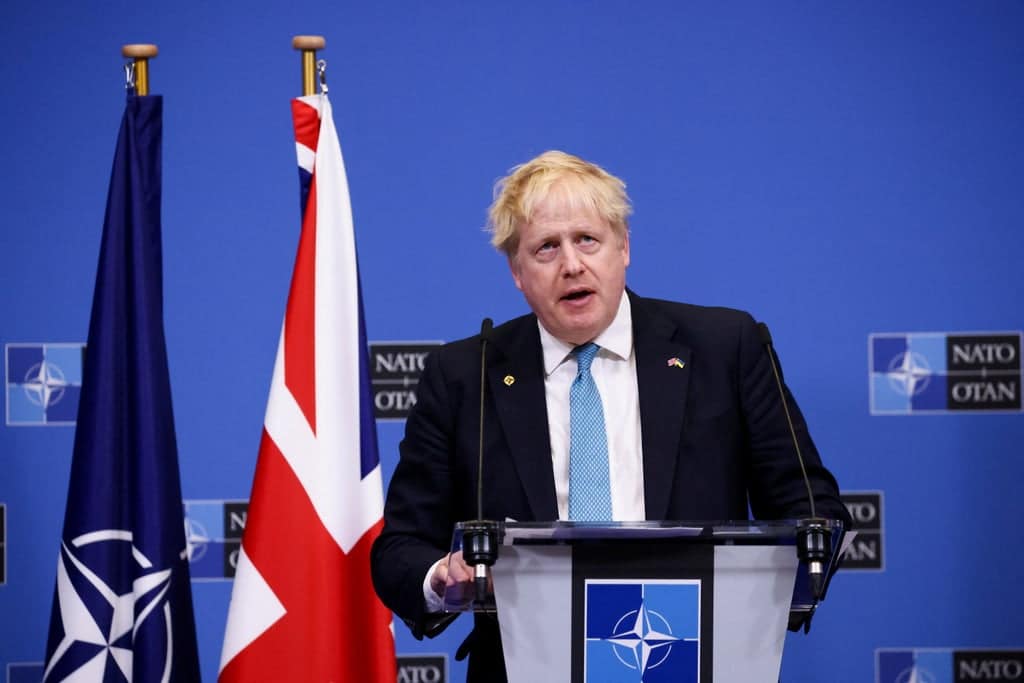 Boris Johnson has conceded it would be a challenge to give Volodymyr Zelensky the tanks he has demanded, as he hit back at the Kremlin effectively labeling him enemy number one among western leaders.

The Prime Minister said it would “logistically” be “very difficult” to supply the Ukrainian president with the tanks and jets he asked for during a Nato summit on Wednesday.

But Mr Johnson said allies would strive to give Mr Zelensky weapons “in the quantity and of the quality” he needs to defend his nation from the Russian invasion.

He pledged more missiles and a new deployment of UK troops to Bulgaria, while doubling personnel in Poland and Estonia to boost Nato on the eastern flanks.

Mr Zelensky, who regularly speaks to the Prime Minister, did not bring up his longstanding demand for Nato to enforce a no-fly zone of Ukraine.

Western allies have previously been hesitant about providing jets out of concerns it could further provoke Russian President Vladimir Putin.

Mr Johnson accepted Mr Zelensky wanted more from Nato, saying allies felt “agony” about their “inability to do more given the constraints we face”.

“What President Zelensky wants is to try to relieve Mariupol and to help the thousands of Ukrainian fighters in the city. To that end he does need armor, as he sees it,” the Prime Minister told reporters.

“We are looking at what we can do to help. But logistically it looks very difficult both with armor and with jets.”

Mr Johnson said “at the moment we’re looking at the equipment we think is more immediately valuable”, including the new package of 6,000 more missiles.

Earlier in the day, Kremlin spokesman Dmitry Peskov was quoted by the state-owned RIA news agency as saying Mr Johnson is “the most active participant in the race to be anti-Russian”.

Speaking at the press conference in Brussels, the Prime Minister said: “Absolutely not, least of all me. I think I’m probably the only Prime Minister in UK history to be called Boris, I think I have that distinction, and I’m not remotely anti-Russian.

“But I think what we all agree is that what Vladimir Putin is doing, the way he’s leading Russia at the moment, is utterly catastrophic, that his invasion of Ukraine is inhuman and barbaric.

“And the conduct of that invasion is now moving into the type of behavior that, as I said before, we haven’t seen in the continent of Europe for 80 years, and it’s horrific.

“So you can be sympathetic towards ordinary Russians, who are being so badly led, but you can be deeply hostile to the decisions of Vladimir Putin.”

Mr Johnson warned the Russian president that he would be hit with “very, very severe” consequences if he used chemical or biological weapons in Ukraine as allies fear.

“You have to have a bit of ambiguity about your response but I think it would be catastrophic for him if he were to do that,” the Prime Minister said.

After the meeting, US President Joe Biden said the use of chemical weapons would be met with a “response in kind” depending on the “nature of the use”.

A western official said that the use of such weapons would mark a “fundamental change” in the Ukrainian conflict but said it was “highly unlikely” it would be met with Nato troops in Ukraine.

Nato Secretary General Jens Stoltenberg announced an agreement to provide assistance in the cyber-security sphere and equipment to protect against biological, chemical and nuclear threats.

And leaders approved the deployment of new Nato battle groups in Bulgaria, Hungary, Romania, and Slovakia to shore up the defense alliance’s eastern flank.

Mr Johnson urged a targeting of Mr Putin’s gold reserves to prevent him trying to get around sanctions as he announced a fresh wave of travel bans and asset freezes.

Among those targeted were the Wagner Group, a Russian paramilitary organization accused of plotting to assassinate Mr Zelensky.

The Foreign Office said a total of 1,000 fresh sanctions have been handed out since the invasion began, with 65 more announced after Mr Johnson arrived in Belgium.

They included Russian billionaire Eugene Shvidler and Galina Danilchenko, who was installed by Moscow as the largest of occupied Melitopol in south-east Ukraine.

Banks, a diamond producer and Polina Kovaleva, the stepdaughter of Russian foreign minister Sergei Lavrov, were also among the newly targeted.

It is also supplying and training Ukrainian troops in the use of Starstreak high-velocity anti-air missiles as well as providing body armor, helmets and combat boots.