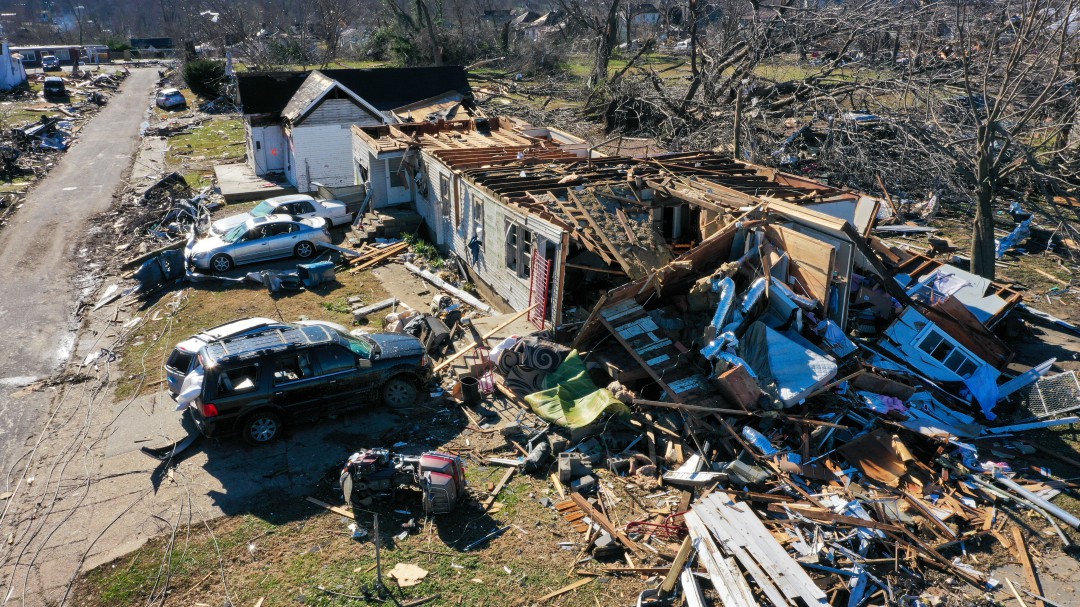 The US authorities are still holding out for a “miracle” to take place and those who are feared are under the rubble of the Mayfield (Kentucky) candle factory destroyed by a tornado on Friday night are found alive, an event on which there is a dance of figures.

About 40 hours after the building collapsed in the face of a tornado category F3 on the Fujita scale, with a maximum of 5 and that classifies these phenomena by the destruction they leave behind, state, local and federal authorities trust in the success of the still “rescue tasks”.

And all despite the fact that since Saturday no survivor has been found alive, of which about 110 who worked the night shift in this factory located on the outskirts of the small town of Mayfield, with about 10,000 inhabitants. .

And the “miracle” requested by the governor, Andy Beshear, could come in the form of news from the company that owns the factory, which assured this Sunday that the confirmed death toll is eight workers and that many others would be missing, figures much lower than those handled by the authorities.

In statements collected by WPSD Local 6, Bob Ferguson, spokesman for the Mayfield Consumer Products company, indicated that 8 people have died and that 93 people of the hundred who were working in the factory at the time of the collapse are located and safe, while Beshear it had indicated that only 40 had survived.

In this way, only less than a dozen people would remain to be located.

However, during a press conference this Sunday afternoon, the governor reiterated his previous statements in which he assured that only 40 were located, leaving about 70 missing.

Beshear indicated, without specifying, that they had not been able to confirm information from the company on the figures.

“We are still receiving information about the candle factory. The owner has been in contact and thinks he has different information. We are trying to verify it,” said Beshear. “I pray that perhaps the original estimates of those we have lost are wrong.”

Hours before the press conference, the governor told CNN that the total death toll in his state from the different tornadoes that touched down on Friday is already around 80 and that he expects it to exceed one hundred.

“I know we have lost more than 80 Kentuckians. That number is going to exceed 100. This is the deadliest tornado we have ever had,” he said in an interview with the television network.

Mayfield’s is one of four that made landfall in Kentucky late Friday, and Beshear said he fears a double-digit death toll in at least four counties in his region.

In an interview with CBS, the governor indicated this Sunday that a 3-year-old boy and a 5-year-old were among the deceased.

Thousands of people lost their homes, about 50,000 remain without electricity and telecommunications continue to suffer severe problems, which makes it difficult to locate people whose relatives have reported missing.

At the same press conference, the Secretary of Homeland Security, Alejandro Mayorkas, who traveled to Kentucky this Sunday to show support, said that the federal government is providing water, food and shelter to those affected.

See also  A couple had £90,000 worth of designer goods stolen, and now they're offering a reward just to get their own clothes back.

Mayorkas assured that the federal government will do what “is necessary” and will do what is in “its power” to help local authorities and rescue teams.

US President Joe Biden approved the Kentucky emergency declaration on Saturday, allowing more funds and personnel to be sent to the area.

300 National Guard soldiers are deployed in Kentucky, said the governor, who stressed that the military is searching house to house and giving “certainty” to the survivors of Friday night.

Mayfield, the epicenter of drama

Mayfield was the city hardest hit by the wave of more than 30 tornadoes that hit six states in the country, killing six in Illinois, four in Tennessee, two in Arkansas and two in Missouri, according to local authorities.

Through this small town, where today hundreds of people took to the streets to start recovery tasks as soon as possible, the tornado passed that remained on the ground for more kilometers, with more than 220 miles (350 kilometers), since there are records across the U.S.

So much so that local media reported that an old photograph of a Kentucky family appeared more than 150 miles (240 kilometers), in the state of Indiana, after the tornado hit.

And such was the force of the great tornado that Beshear explained that it was not only that it ripped off the roofs of the buildings, but that it made them “explode”, regardless of whether they were made of wood, concrete or steel.

They were not the only ones, since more than 30 did so in half a dozen states, where they left a balance of six dead in Illinois, four in Tennessee, two in Arkansas and two in Missouri, according to local authorities