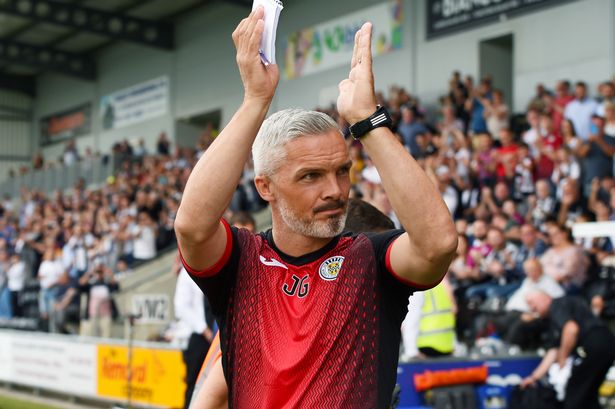 The Buddies have been waiting anxiously for updates after their boss was given permission to speak to the Dons yesterday afternoon, having been one of their key targets following the sacking of Stephen Glass after just 11 months in charge.

Now the Pittodrie club have confirmed that the Saints’ fan favourite, who captained the club to League Cup glory in 2013, will take over after agreeing to a two-and-a-half-year deal at the north-east club.

Aberdeen have agreed to pay the compensation clause set out in Goodwin’s contract, believed to be around £250,000, which still had just under two years left to run.

Having beaten former Buddies boss Jack Ross at the interview stage, Goodwin will now follow in the illustrious footsteps of Sir Alex Ferguson and Alex Smith – who both managed the Dons directly after leaving Paisley.

His assistant Lee Sharp is also making the switch to Pittodrie.

St Mirren chief executive Tony Fitzpatrick said: “I would like to place on record my thanks to Jim Goodwin for all he has done in his time at St Mirren.

“Jim raised the bar during his time at the club – reaching both the semi-finals of the League and Scottish Cups last season as well as achieving our highest top-flight finish in over 30 years. Jim leaves us challenging for a top six position and in the quarter-finals of the Scottish Cup.

“I know leaving St Mirren was a difficult decision for Jim and while we are disappointed to lose him, Aberdeen met a release clause within his contract and we respect his decision to move on.

See also  Copenhagen mall shootings: Why do gun attacks appear to be increasing in Scandinavia?

“Jim has been a fantastic ambassador for our club and we wish him every success for the future.”

St Mirren have already started the process of recruiting a replacement, with the club looking to secure a top-six finish this season having narrowly missed out on that target under Goodwin last season.

The Daily Record reports that the Buddies have asked permission to speak to Aberdeen player-coach Scott Brown about a potential move to Paisley.

The Saints are also just 90 minutes away from a return to Hampden, with a Scottish Cup quarter-final tie coming up against Hearts early next month.

Goodwin arrived at the SMISA Stadium in July, 2019 after a successful spell cutting his teeth with Alloa Athletic.

He led the club to ninth spot in his first season in charge, which was curtailed due to the coronavirus pandemic, before guiding them to seventh last season.

He also led the club to the semi-finals of both the League Cup and Scottish Cup last year, narrowly losing out to Livingston and St Johnstone respectively at behind-closed-doors clashes at Hampden.

Today the Paisley club travel to West Lothian to take on Livi, with academy director Allan McManus and coaches Jamie Langfield and Andy Webster leading the side on an interim basis until a new manager in Paisley is appointed.

It looks set to be a fairly unwelcome period of significant change for St Mirren as they enter the business end of the season, with chief executive Tony Fitzpatrick also set to step down next month.