Gabriel Jesus scored four and assisted a superb Rodri volley as Manchester City moved four points clear at the top of the Premier League table thanks to a 5-1 win over Watford at the Etihad.

The result means City’s lead at the top of the Premier League table is extended to four points, with second-place Liverpool in action tomorrow when they host Everton.

In a game of huge significance for both sides, it was City who scored first when Oleksandr Zinchenko’s driven ball across the face of goal was turned in by Gabriel Jesus inside four minutes.

It was a fast start and the home side were very much on top but Watford should have equalized not long after Jesus’ opener. A rare error from Joao Cancelo ceded possession on the halfway line and allowed Watford to break clear. Josh King released Emmanuel Dennis who looked certain to score when one-on-one with Ederson, but Zinchenko raced back and made a wonderful last-ditch tackle to deny Watford an equaliser.

Jesus bagged his second to double our lead, the City forward heading home from Kevin De Bruyne’s outstanding cross. If any further evidence were needed of De Bruyne’s unrivaled ability to produce inch-perfect deliveries, it was provided by this moment of genius.

But Watford carried a threat for much of the first half and Hassane Kamara halved the deficit when he capitalized on some poor City defending to fire the ball into the bottom corner.

It was a goal that threatened to derail City’s momentum, but our superiority was restored when Rodri produced smashed a blistering volley into the top corner from 22 yards out.

City should have been 4-1 up when a rampant Jesus got to the byline and pulled a fine ball back for Sterling, but he fired over the bar from a great position.

The second half saw City take total control and dismantle a Watford side fighting to avoid relegation to the Championship.

Jesus earned a penalty within seconds of the restart. The Brazilian won possession from Kamara, raced into the area and rounded Ben Foster, before being brought down by the Watford keeper. After a lengthy VAR check hindered by some technical difficulties, Jesus stepped up and dispatched his penalty with minimum fuss.

And he bagged his fourth moments later when a fine team move ended with Jesus playing a one-two with De Bruyne before smashing the ball past Foster to make it 5-1.

It was fine display from City – led by the dynamism of Jesus – and it leaves us knowing five more wins will seal another Premier League title.

Man of the Match: Jesus

Four goals and an assist. This was a superb display from the Brazilian, who combined his trademark hard work with some outstanding individual quality.

And you could sense the happiness in your teammates. Jesus is one of the most dedicated professionals in the City squad, a player who always puts the team ahead of his own interests. He has earned the respect of everyone and this performance was richly deserved. 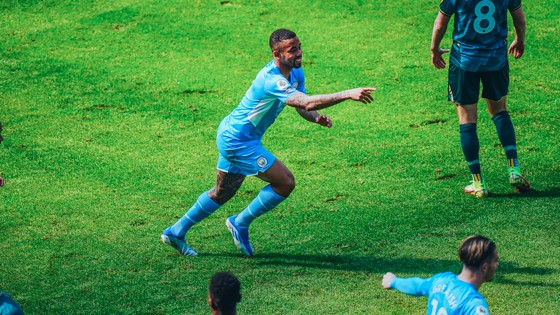 City are now the first team in Premier League history to win 15 consecutive matches against the same opponent.

And Gabriel Jesus has become the first player to score four goals in a single Premier League game since Tottenham’s Son Heung-min vs Southampton in September 2020.

“It’s my first hat trick in the Premier League – four goals – I am so happy.

“I try to help my team. I want to say thank you to Kevin [De Bruyne]. He is the penalty taker and he said, ‘Gabby go and score a hat trick’. I want to thank him for giving me the opportunity.

“I had scored two and he said score a hat trick. He is not selfish. I am here to score goals. I know I can help my team.”

“Tonight I’ll go home. We play on Wednesday so I’ll start to think about Real Madrid. Tonight I’ll watch some minutes from some games I want to watch, and that’s all.

“The situation hasn’t changed today. We have to win all the games to be champions. We have five left. They’re difficult ones because they’re mixed in between the Champions League, but it’s a pleasure and I’m so proud again to be here.” 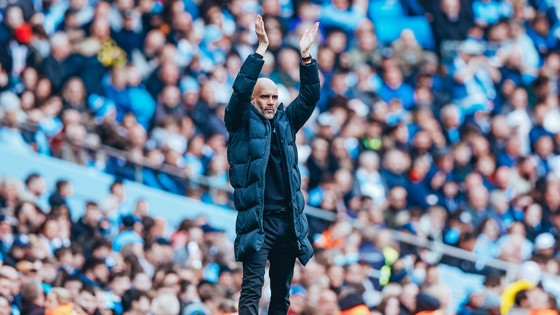 City move four points clear of Liverpool at the top of the Premier League table, but Jurgen Klopp’s side can reduce the gap to one when they face Everton at Anfield tomorrow.

The important thing is the destiny of the title race is in City’s hands. We know if we win all our remaining five matches, we will win the Premier League for the fourth time in five seasons.

Huge pressure, but we wouldn’t want it any other way.

City’s focus switches now to the UEFA Champions League. On Tuesday, Real Madrid visit the Etihad for the first leg of our semi-final tie.

Games don’t come much bigger. Real Madrid are the most decorated side in the history of the competition having won it 13 times and have an array of quality players. It should be a very special occasion.

It kicks off at 20:00 (UK) and we will have full coverage on the official Man City app, starting on Monday when we will bring you Guardiola’s pre-match press briefing live at 12:30, followed by live training at 15: fifteen.

And it’s back to the Premier League on Saturday 30 April as we travel to Leeds United. That’s at 17:30 (UK) kick off.

Four Gabriel Jesus goals and a thunderous Rodrigo strike inspired City to a 5-1 Premier League victory over Watford at the Etihad Stadium, taking us four points clear at the top of the table. View more.