Skip to content
Home News Jean Castex: “We will do everything to fight the extreme right. France is not that ”| International 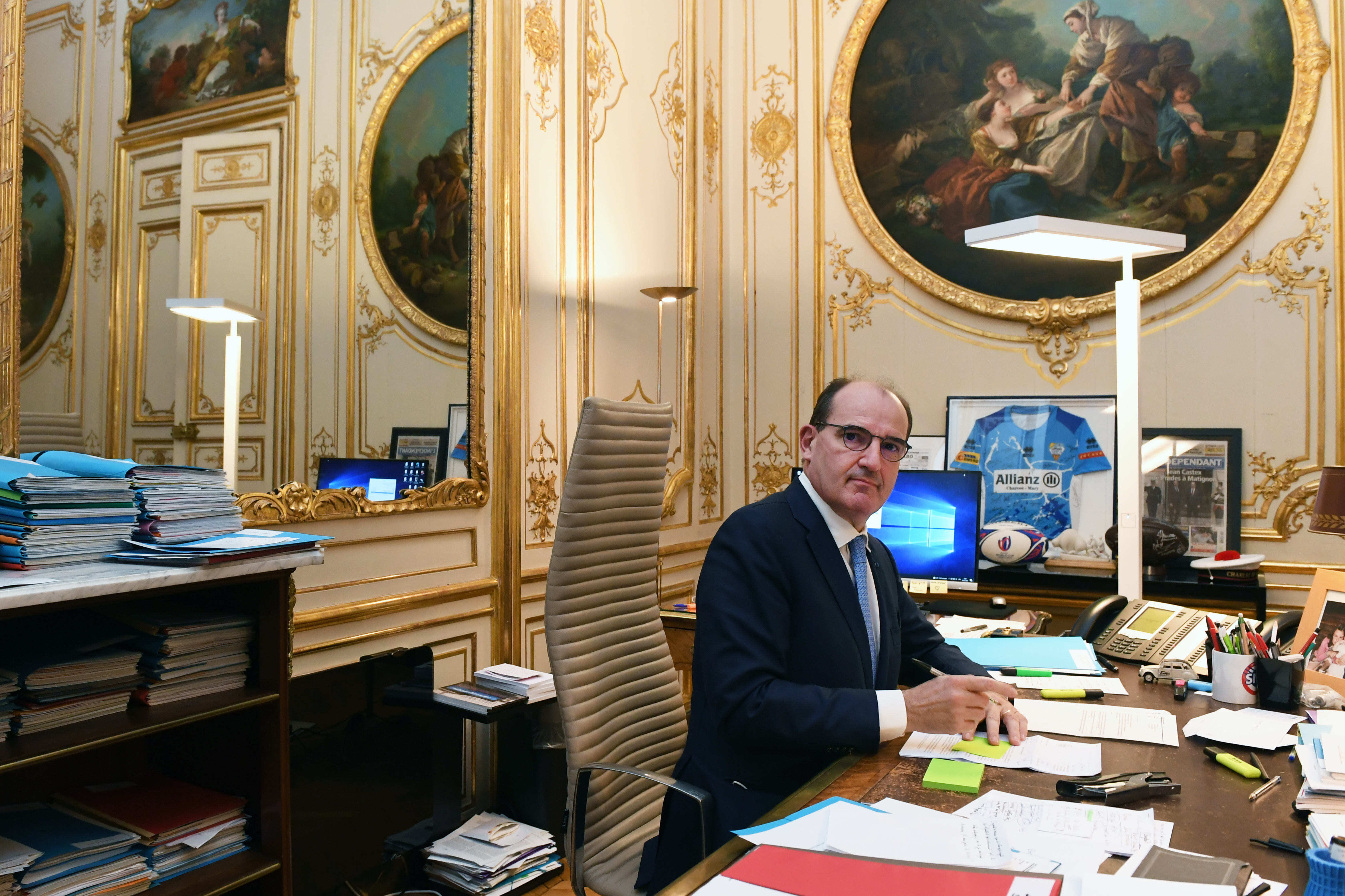 Jean Castex, Prime Minister of France, avoids mentioning, during an interview with EL PAÍS on Wednesday in his office in the Matignon palace, the man who, with a message of rejection of Muslims and stirring up the specter of civil war, has turned French politics upside down and scared many compatriots. He does not say his name, but when speaking of Éric Zemmour, candidate for the presidential elections next April, and the ideas he represents, he is blunt: “France is not that.”

Castex (Vic-Fezensac, 56 years old) repeats it several times to point out that the image of France offered by this and other extreme right-wing candidates – together, they make up a third of the electorate – does not reflect the French reality. The violence at a recent Zemmour rally, whose voting expectations are around 15%, is unusual even for a country accustomed to political tension in the streets and altercations.

“Yes, there is a certain core of the extreme right in France,” he admits. “I regret it, I regret it. But first, surely, this does not reflect France. And then, and above all, history has taught us that the application of these ideas has produced nothing but catastrophes. What did not work yesterday will not work better tomorrow. It is a dead end against which we will fight with everything ”.

Castex, a year and a half after the president, Emmanuel Macron, appointed him to the position, travels to Madrid this Friday to meet with his Spanish counterpart, Pedro Sánchez. The visit comes at a key moment in Macron’s presidential five-year period. France will assume the rotating presidency of the European Union for six months in January. And it will coincide with an election in which Macron will play for reelection and the continuity of his project.

On the agenda of Castex’s visit to Madrid are the French presidency of the EU and European immigration policy. The elephant is embodied by the restrictions on movement at the Franco-Spanish border crossings in the Pyrenees. At the beginning of the year there were 17 affected steps; now there are 10. The measure, decided unilaterally by Paris, upset in Spain.

“I think Spain understands it very well,” says Castex. “We act according to the rules: it is about border controls and not closures. These are controls carried out for security reasons and reintroduced in the framework of the fight against terrorist attacks. Better monitoring of migratory flows and, if necessary, terrorist flows, is a shared objective between France and Spain ”.

When asked whether these controls have made it possible to detain terrorists, he replies: “I will allow myself not to answer this question for obvious reasons of confidentiality. Know, however, that the antiterrorist cooperation between France and Spain is excellent ”.

The need for controls at an internal border between two EU partners raises the question of whether Spain should do more to control its southern limit, which is also the southern border of the Schengen area of ​​free movement. Castex replies: “It is not up to France to give lessons, I would not allow it and, above all, I do not think so!”

Castex does not give a date to lift the controls. “An announcement in this regard is not yet on the agenda. But, without a doubt, you can see a dynamic with an improvement of mixed patrols [franco-españolas]. The more bilateral control is improved, the more we will be able to lift the closing points ”. The electoral year, with extremist parties competing to demand the closure of the borders, does not facilitate it.

The son of a teacher and the president of a rugby club, he knows the Pyrenean territory well. It is their adopted land. Although he was born and raised near Toulouse, as a child he frequented the Pyrenees to take care of his asthma, and there he met the Catalan-French Sandra Ribelaygue, who would later become his wife and mother of his four daughters. A senior civil servant trained at the National School of Administration (ENA, the nursery of the French elite), between 2008 and 2020 he was mayor of Prades (Prada de Conflent, in Catalan), at the foot of Mount Canigó. This double itinerary makes him a particular specimen within a fairly uniform ruling class in France: experienced in the engine room of the State. Before being the head of government, he had traveled almost all the echelons of the Administration: from adviser to the conservative president Nicolas Sarkozy to responsible for organizing the first deconfinement in the spring of 2020. At the same time, he is glued to rural terrain. In his office he has several rugby balls, an authentic national sport of the South, and no day is there on his table the copy of The Independent, the newspaper of Perpignan.

Castex can speak “a little [un poco]” Catalan and practice Spanish with Sánchez. Regarding the independence process in Catalonia, who lived as mayor of a symbolic town for Catalan nationalism, he comments: “Whatever differences may exist, they must be resolved peacefully, through dialogue: this is what democracy and the rule of law for which Spain fought. On the other hand, I have always been a great admirer of the way in which the Democratic Transition started after Franco’s death ”.

This Friday, the prime minister wants to take advantage of his visit to Madrid to return to the French Embassy, ​​where in 1989 he did his internship as a student of the ENA. “It was a Spain in full boom”, He describes recalling those times when the country had just entered the then European Economic Community. “The Spain of the Movida and Almodóvar,” he continues. And, looking at his press advisers, younger and present in the interview, he smiles: “It is the Spain in which one walks through the streets of Madrid at four in the morning and it is difficult to circulate with so many people there are! ”.

It was another world. The Berlin Wall was about to fall. For many a youthful optimism prevailed. More than 30 years, several economic crises later and with an ongoing pandemic, the world is different.

“France, like the rest of the world, is in crisis: a health, economic, social crisis. Crises always imply phenomena of exclusion, phenomena of withdrawal into oneself ”, reflects Castex. “But we must resist this temptation: it is the moral and political duty of the leaders. Some do not resist it and I regret it ”.

In his speech before the National Assembly, after appointing him Macron, in 2020, Castex announced that his “first ambition” would be “to reconcile these very different Frances, unite them or reunite them”. The tension that reflects, among others, the fenómeno Zemmour, it proves that the objective has not been achieved.

“National cohesion is a long-term job,” defends the prime minister. “But I want to distinguish the French from those who seek to disunite them or pit them against each other. As for me, and to be faithful with my actions to the general policy statement, I always try, together with President Macron, to unite, federate populations, territories, and especially those who are in difficulty. And I firmly condemn those who call to the exclusion and hatred of the other. France is not that. Our history is also one of great diversity ”.

Castex refuses to answer a question about the vigorous 2022 presidential candidacy of Valérie Pécresse, elected last week by Los Republicanos (LR), the traditional right-wing party in which the prime minister militated until he took command of the government. The first polls predict that she is the candidate in the best conditions to beat Macron in April.

A peculiarity of this prime minister compared to others is that he does not harbor political ambitions nor does it cross his mind to compete with the president. It is easy to imagine him in the future back to the mayor of Prada.

When asked about the greatest danger in these elections, he responds: “Fear. France has many assets and incredible strength. We believe in it and we will do everything to continue being a great industrial, cultural and European power that we are, and that believes in multilateralism more than in unilateralism, that believes in democracy more than hatred. You have to stay true to who we are and trust us ”.

“Fear will not prevail.”

A defense of regional languages

Prime Minister Jean Castex, who knows a little Catalan and was mayor of a town with a long Catalan tradition for more than a decade, knows the engine room of the French centralist and Jacobin state like few others, but at the same time possesses a Girondin sensibility , that is to say, in the tradition of France attentive to diversity. Perhaps this sensitivity explains why he adopted a mediating position in the political-legal conflict over schools that use linguistic immersion in regional languages ​​in France. “The French language”, explains Castex, “is inherent in the values ​​of the Republic and the unity of the nation, to which I am very attached. But these values ​​do not exclude a recognition of regional languages, cultures or different traditions ”.
The recent conflict erupted when last May the Constitutional Council vetoed the article of a new law that allowed teaching in the native language in public schools in regions where Breton, Catalan or Basque is spoken. Castex believes a balance can be found.
“We are no longer in the era of monarchical hyper-centralization that wanted to erase local dialects and regional languages. Today the Republic has allowed a balance that we are now trying to confirm ”, he assures. And he gives the example of the Bressola – a primary school that practices immersion in Catalan – in his municipality, Prada de Conflent, and points out that his students’ command of French is optimal. “When they leave, the students are still in middle school and then in high school, and it works,” emphasizes the prime minister.