Care workers who provide services in residences, home help and day centers in Euskadi have demanded in the three Basque capitals a improvement of their working and salary conditions and a public, dignified, universal and free model during the strike day called in the sector by the ELA, LAB, CCOO, UGT and ESK unions.

The call for a strike has been supported by other unions such as Satse or the CNT, as well as associations of family members from residences and groups of Basque pensioners, who have joined and taken part in the demonstrations that took place at noon in Bilbao, Vitoria-Gasteiz and San Sebastián, and among which were family associations such as Babestu Bizkaia and Araba, Gipuzkoako Senideak, platforms of pensioners and feminist groups.

During the marches, the “dignification” of care within a public care model has been vindicated, in addition to denouncing the “high precariousness” and rotation that occurs in the sector and the “lack of visibility” of a strongly feminized service.

They have also demanded that they open investigations and audits to find out what happened in the sector during this pandemic, and have demanded that public administrations open a debate on the current model of the care sector.

The convening unions have also denounced the “abusive” minimum services 100% decreed by the Basque Government, which is why it is “very complicated and difficult” to calculate the monitoring of the unemployment day.

At the demonstration held in Bilbao, the general secretary of ELA intervened at the beginning of the march, False Lakuntza, who has reiterated that the current model of care is a “failed” model, which must be changed “immediately”, and that the solution passes through a public model that puts people at the center and not economic benefit.

Lakuntza has demanded in front of the headquarters of the Basque Government that, “immediately”, investigation commissions be set up in the General Boards of Gipuzkoa, Bizkaia and Álava and in the Parliaments of Gasteiz and Iruña to “analyze what has failed in the care sector and take all the necessary measures so that what happened never happens again “and demand that they change the current model that is based on” the business and not the people “.

In his opinion, it is a model that “they defend tooth and nail, even though they know perfectly well that it does not guarantee decent living conditions for either the workers or the users, with hundreds of deaths and thousands of infected workers. “.

For Lakuntza, this model hides “the great lie of public-private collaboration” with “absolutely insufficient” staff, “inhuman” ratios and “unaffordable” workloads that do not guarantee sufficient attention times “based on inhuman calendars,” saturated schedules or total availability “.

Both ELA and the rest of the unions have emphasized the lack of investment in material means and protection measures, which has put at serious risk, since the beginning of the pandemic, both the health of the workers and that of the users due to fault of a “galloping” privatization and a search, above all, of “an increasing benefit for companies and that increases as the workforce decreases, conditions worsen or attention times are reduced”.

After the intervention of the ELA leader, the columns of all the organizing unions in the Biscayan capital have departed from different points of the Biscayan capital and have converged at the height of the Moyúa square, from where they have gone to the Foral Palace, headquarters of the Diputación de Bizkaia, to conclude the demonstration and stand in a circle with all the banners lined up around the foral building.

At the end of the demonstration, the general secretaries of CCOO Euskadi, Loli García, and of LAB, Garbiñe Aranburu, as well as the head of UGT Euskadi, Raúl Arza, have assessed the call.

In his speech, Loli garcia has pointed out the need to vindicate a fundamentally feminized sector because “a fair country requires social services and care that meet the needs of the especially vulnerable population.”

García added that in the Basque Country the public services provided by this sector are “for the most part privatized”, which has generated “ineffectiveness in the management of available resources to cover needs with a significant level of precariousness”.

For its part, Garbiñe Aranburu (LAB) has affirmed that if something has been learned in this pandemic, it is that care-related jobs are “essential to sustain life”, hence the slogan chosen by LAB for the strike day; “the need to take care of care” to move towards a public system from the political, economic and social recognition of the sector and to address improvements in wages and working conditions.

Aranburu has demanded that care “cannot be a business niche” and has called for an end to the privatization and commercialization policy followed in recent years. It has also considered urgent to address the publication of the system and open a social debate on the care model in which workers and also users and family members have to participate.

The Secretary General of UGT Euskadi, Raul Arza, has framed this mobilization in the need to “dignify” care and “make visible” the work that this group, “highly feminized and with a high temporality”, has been doing with the elderly, residences and home help.

See also  Hysteria, blackmail and backbiting: Popular board game comes to life with Cluedo at The Lowry theater - Dianne Bourne

Arza has pointed out the need at this time for “a social pact for care” and to review among all the agents involved the work carried out to care for these elderly people who have been hit by the covid in the first person to also contribute to improving working conditions and salaries of the workforce.

The UGT Euskadi leader has asked the public administrations “not to hide behind the companies” because the one who makes the awards are the administrations themselves, for which he has demanded that they increase the resources to dignify working conditions. Arza has trusted that “sooner rather than later”, the Basque Government and the provincial institutions will call the unions for a debate and an audit in order to “know what has happened in the care of the elderly this last year and improve it”.

For her part, the representative of the Basque Pensioners Movement, Andrea Nail, a group that has supported and participated in the mobilizations, has justified the presence of its group in the need to make visible the “worrying” situation in the residences, which is getting worse and worse and with more infections and deaths.

VIDEO | Images of the demonstration in Vitoria-Gasteiz 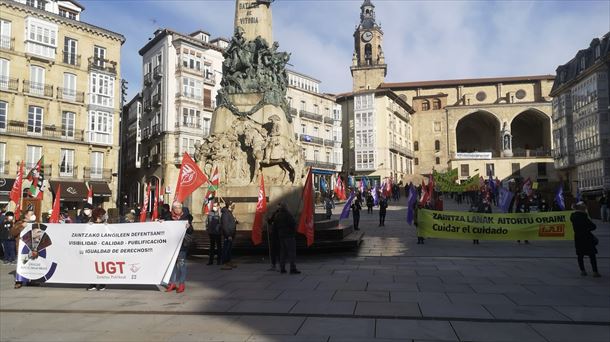