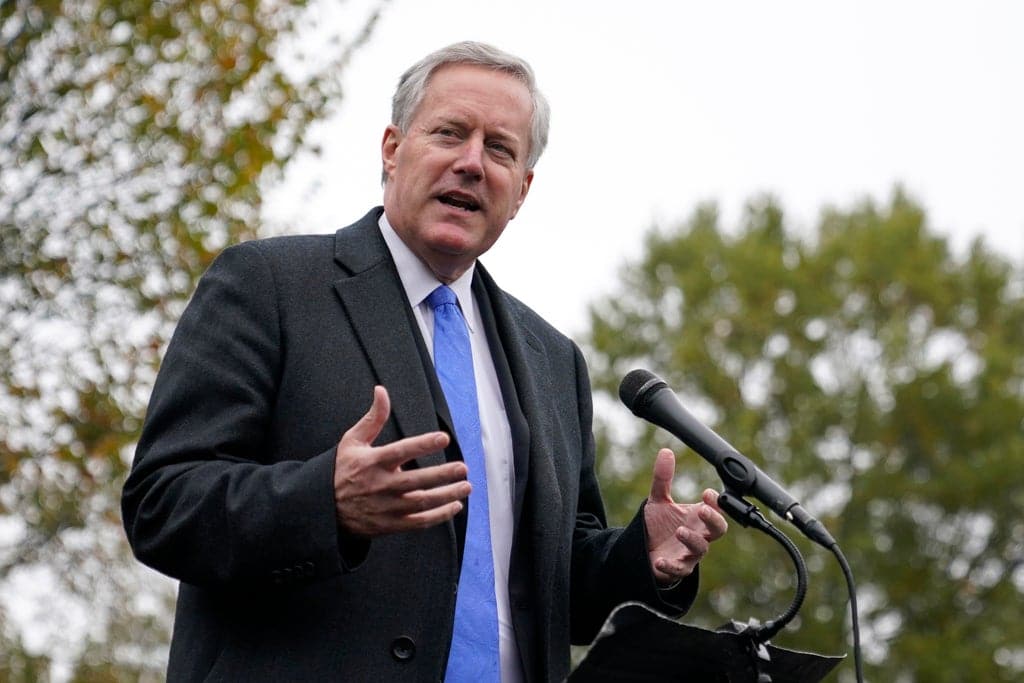 The congressional select committee investigating the failed insurrection at the US Capitol on 6 January 2021 has acquired a string of text messages between Donald Trump’s then-White House chief of staff Mark Meadows and conservative activist Ginni Thomas.

In them, the wife of US Supreme Court justice Clarence Thomas repeatedly pressures him to promote conspiracy theories in a bid to stop the certification of the 2020 presidential election results.

Over the course of the 29 messages sent between early November 2020 and mid-January 2021 – 21 of which came from Ms Thomas, eight from Mr Meadows – the former urges the top Trump aid to push the president’s spurious voter fraud narrative, claiming that the election was “rigged” by Democrats to ensure Joe Biden’s victory and deny him a second term.

The texts represent just a small handful of the treasure trove of 2,320 handed over to the committee by Mr Meadows during the brief window last year in which he was prepared to cooperate with its inquiry before changing his mind and reneging.

The story was first broken on Thursday evening by CNN, before Washington Post and CBS followed up by reporting the specific content of the messages.

Ms Thomas has previously admitted that she attended the “Stop the Steal” rally in Washington, DC, on 6 January.

The event proved to be a prelude to the violent assault on the legislative complex by enraged supporters of Mr Trump, seeking to prevent a joint-session of Congress from sealing the election results.

That formality was presided over by then-vice president Mike Pence, whom the mob had threatened to hang if he did not respond to Mr Trump’s call for complicity.

Five people were killed in the ensuing riot, which saw the attackers fight through police barriers and burst into the US Capitol, vandalizing the offices of lawmakers and threatening to take hostages in scenes that shocked the world.

The first available message sent by Ms Thomas to Mr Meadows is from 5 November 2020, just two days on from Election Day, and includes a link to a YouTube video (since removed) by far-right commentator Steve Pieczenik parroting QAnon talking points about the rumored watermarking of ballots.

“I hope this is true; never heard anything like this before, or even a hint of it. Possible???”, she asked, before continuing: “Watermarked ballots in over 12 states have been part of a huge Trump & military white hat sting operation in 12 key battleground states.”

Commenting on Twitter on Friday, CNN pundit Daniel Dale branded these comments “Lindell-caliber stuff”a reference to MyPillow entrepreneur Mike Lindell, who has poured much of his personal fortune into spreading highly questionable election conspiracy theories over the last 17 months to little impact.

Ginni Thomas continued to bombard the White House chief of staff with appeals for action, telling him on 10 November: “Help This Great President stand firm, Mark!!! … You are the leader, with him, who is standing for America’s constitutional governance at the precipice. The majority knows Biden and the Left is attempting the greatest Heist of our History.”

Mr Meadows responded on that same day by reassuring her: ”I will stand firm. We will fight until there is no fight left. Our country is too precious to give up on. Thanks for all you do.”

As Mr Trump’s election fraud allegation continued to dominate the media, pushed by the president himself, his personal attorney Rudy Giuliani and others, Ms Thomas evidently began to put her faith in right-wing lawyer Sidney Powell, who glorifies in the self-chosen nickname “The Kraken”, after the sea monster of Scandinavian folklore.

“Sounds like Sidney and her team are getting inundated with evidence of fraud. Make a plan. Release the Kraken and save us from the left taking America down,” Ms Thomas urged Mr Meadows on 19 November.

A day later, he cited his Christian faith as a motivating factor, telling her: “This is a fight of good versus evil. Evil always looks like the victor until the King of Kings triumphs. Do not grow weary in well doing. The fight continues. I have staked my career on it. Well at least my time in DC on it.”

On 24 November, she told him: “I can’t see Americans swallowing the obvious fraud. Just going with one more thing with no frickin consequences… the whole coup and now this… we just cave to people wanting Biden to be anointed? Many of us can’t continue the GOP charade.”

Only one of the text messages in the hands of the select committee appears to date from after the Capitol riot and it is one of Ms Thomas’s most resigned and apocalyptic in tone, sent to Mr Meadows on 10 January, four days after the thwarted coup.

She wrote: “We are living through what feels like the end of America. Most of us are disgusted with the VP [Mr Pence] and are in a listening mode to see where to fight with our teams. Those who attacked the Capitol are not representative of our great teams of patriots for DJT!! Amazing times. The end of Liberty.”

While none of the messages reference her husband (who is currently in hospital) or the US Supreme Court directly, legal ethics experts are already suggesting that Ms Thomas’s apparent attempt to exploit her privileged position to intervene could amount to a conflict of interest and could result. in her being subpoenaed by the committee, according to CNN.

As NBC commentator Jason Abbruzzese wrotethe development is another reminder of how pernicious and seductive online conspiracy theories can be.

“We have to really reckon with the reality that some very powerful people are being warped by this stuff.”