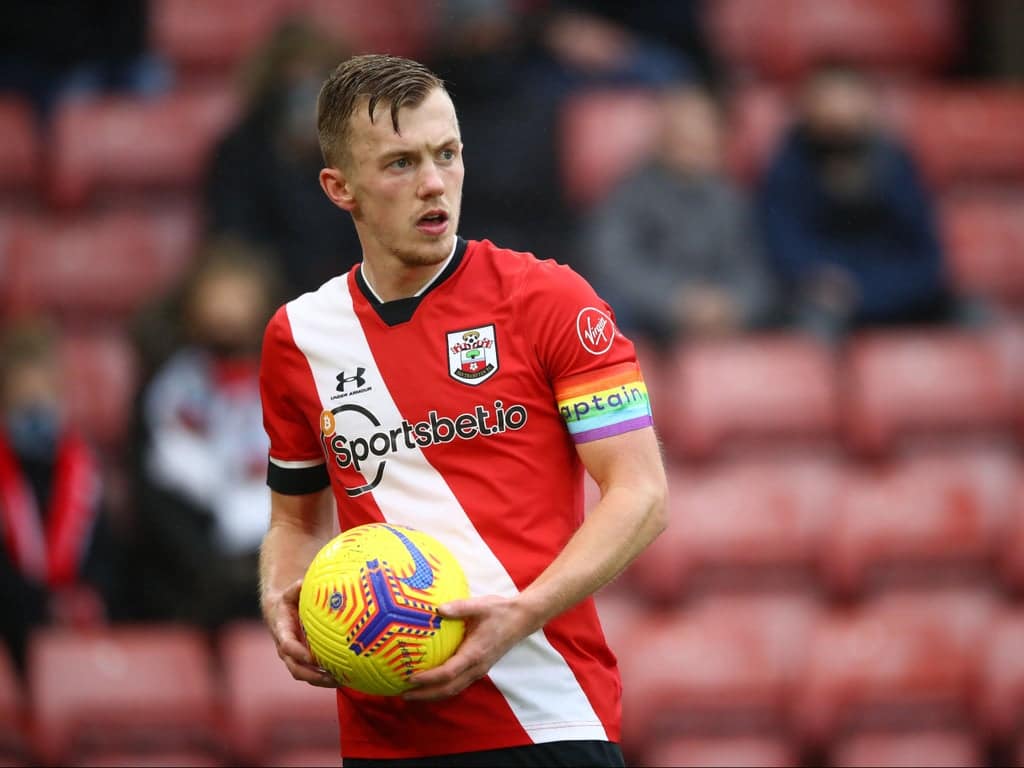 Admittedly, it does not work that well in print, but believe us when we say that James Ward-Prowse is quite the impressionist.

“You could say that,” he admits when the subject is raised at St. George’s Park. It was a hidden talent but the secret is out now after showing off a more than decent stab at Gary Neville’s Bury drawl on Sky Sports following Southampton’s win against Norwich last month. There are a few more in his locker than him too. How about a Ralph Hasenhuttl? “No, I’m not doing that one.”

That’s probably for the best, what with Ward-Prowse being the Southampton captain and all, but his impersonations are not without their uses in the St Mary’s dressing room and at international meet-ups with England. “It’s a good ice breaker for when someone new comes in,” he adds. “It’s something I’ve done since being a kid.”

But despite this knack for mimicry, Ward-Prowse’s best-known talent is one that is entirely unique to him: his free-kick taking.

Though it is a disservice to reduce any player to one ability, Ward-Prowse’s mastery of dead-ball situations is arguably unparalleled in his sport. That is certainly the opinion of Pep Guardiola, who recently called the Southampton midfielder the best free-kick taker in the world. The only player in Europe’s top five leagues to score more over the past five seasons is Lionel Messi.

Guardiola was speaking just days after a particularly special one against Wolverhampton Wanderers, when trailing 2-0 in an eventual 3-1 defeat. The dipping, swerving 35-yard hit was nominated for January’s goal of the month award, only losing out to some stiff competition, but it was not typical of his growing back catalog of him.

“That one was probably more distance, but the ones I curl have less power in them,” he says. The run-up is much straighter than usual. Rather than wrapping his foot around the ball, he smashes through it, as if he is mad with it. “In that particular free kick, there was a lot of anger in it because of the way the game was going.”

Usually, the ball is whipped rather than smashed and whatever’s going on in the game, there are no distractions. “I don’t look too much at the goalkeeper or the wall itself,” he explains. “It’s just more about my process and what I can do. If I can put the ball where I’m aiming to put it, then the goalkeeper shouldn’t save it.”

Hugo Lloris has been beaten once, Emi Martinez and David de Gea twice, and poor old Ben Foster three times, high and low. “I had one the other day against him and Watford and it did creep into my mind I’ve beaten him on both sides and that he might be a bit unsure,” he says. “I’m disappointed not to have got that one.”

The worrying news for Foster and goalkeepers everywhere is that Ward-Prowse is further honing his craft – not by practicing for hours after training, but with limited practice sessions involving only a handful of kicks to replicate the environment of a matchday.

“At the start I’d take 12 to 14 – not every day, but twice a week. Now I’m more into six to eight, just once a week to try and recreate the pressure of a game,” he says. I wouldn’t end on a good one, I’d just take six and that’s my six. I want to recreate that game-like pressure.”

The obvious comparison to draw is with David Beckham. There are plenty of differences – Beckham would practice his free-kicks all hours, for starters – and Steven Gerrard was another influence on Ward-Prowse’s style, which is noticeably different from both those inspirations.

But it is Beckham who holds the record for the most free-kicks scored in the Premier League era with 18. Ward-Prowse is on 12 and has the former England captain’s tally in his sights.

“It would be an incredible achievement and it would be a good lesson to me that if you work hard in life at a skill you can reap the rewards and beat someone like that,” he says. “The funny thing is that he went on to play in other countries while I have spent a long time in the Premier League so that he says a lot about his qualities about him.”

The two are yet to meet. “I would love to one day and have a coffee and a chat and pick his brains from him. If I can reach the record then hopefully he may reach out.

“He was the best,” he adds. “Being English and seeing the magical moments he has created in an England shirt, he was the one I would race out into the garden and try and emulate. I had a few of his hairstyles along the way and some of the boots as well. ” Over the years, Ward-Prowse has perfected that particular impression, albeit with his own unique twist to it.