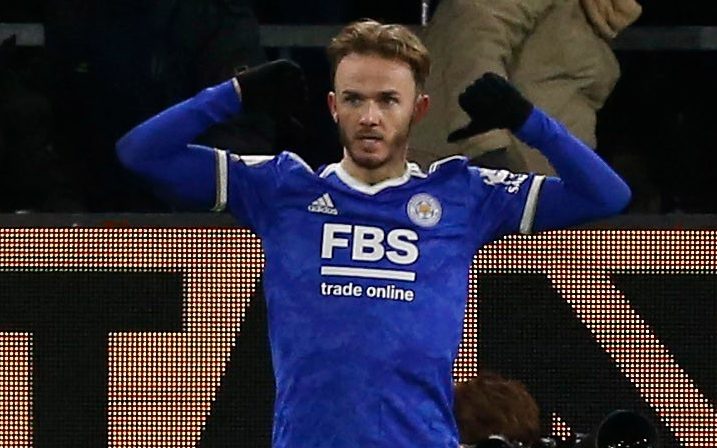 After nursing hot-water bottles on the bench for more than an hour, James Maddison and Jamie Vardy came on and scored the goals that earned Leicester their first Premier League victory of 2022.

Maddison had paid the price for his team’s slump by getting dropped for their last domestic match but produced a fine individual finish just when it looked like Burnley were going to earn a point that would take them out of the relegation zone.

This victory is the tonic that Brendan Rodgers’ team needed. They had dropped down the table since this match was called off in January when Burnley had a Covid-19 outbreak. At the time they were eighth in the table, yet their run of results saw them looking nervously down rather than up.

Any fears of getting dragged into the bottom part of the table were eased when Maddison came on, was teed up by fellow sub Vardy. Vardy then scored himself to seal the victory. Earlier, Leicester’s players minus their matchwinners, were denied by a series of saves by Nick Pope.

The England goalkeeper was at his best in the first half to keep the scores level and it put Sean Dyche’s team within touching distance of climbing out of the bottom three for the first time since September.

The type of evening it would be was summed up in an early spell lasting barely a minute which saw Ben Mee and James Tarkowski crash into opponents on the border of illegality. While Burnley’s survival bid has been led by their new-look attack, they are scrapping for their Premier League status.

Wout Weghorst has given their attack a different angle of attack and Maxwell Cornet’s return from injury will be welcomed. The Ivory Coast international forward, returning from a foot injury, had the ball in the net from Aaron Lennon’s cross and was ruled no more than a boot offside.

It got heated at times. Ian Woan, Burnley’s assistant manager, got himself a yellow card in the technical area after Charlie Taylor had a boot left on him as anger levels rose.

Rodgers has been easing Ricardo Pereira back from injury recently and the Portugal full-back had Leicester’s first chance, getting the ball out of his feet quickly and getting off a shot that had Pope down sharply to palm away.

Pope was called into action again to deny Patson Daka, who found himself in front of goal after a mistake from Tarkowski. Burnley’s goalkeeper used his legs to save when the Leicester forward looked likely to score.

When Daka threatened to run through again, Mee cleanly took the ball but his knee jarred into the Leicester forward and he was eventually replaced by Nathan Collins after trying to continue. Leicester looked to take advantage, with Harvey Barnes cutting inside and seeing an effort punched over the bar.

It was Leicester’s turn to suffer an injury blow when they were forced to replace Ricardo at the interval, with Ademola Lookman coming on and a reshuffle down the right flank. On the opposite side of the pitch Connor Roberts, the Clarets full-back, went on an attacking forward run and saw a dipping shot turned away by Kasper Schmeichel.

Rodgers instructed Vardy to put his hot-water bottle to one side on the bench and start warming up for his first appearance since the end of December when he suffered a hamstring problem keeping him out for more than two months. On came the 35-year-old for a late run, while Maddison was also introduced to add creativity.

Dwight McNeil got to see more of the ball for Burnley and he fed through Cornet on goal, who needed to stretch and poked his finish just wide of Schmeichel’s post. It was his last action before getting taken off. Watching on from the sidelines was Dyche, dressed in a black raincoat zipped up to his chin, and he sensed his striker was tiring.

Vardy had a scissor-kick fly over the crossbar and had a penalty shout turned away when Charlie Taylor clipped him. Barnes looked like he had found the top corner with a curling late effort but Pope turned away another effort.

But the subs combined with eight minutes left to devastating effect. Vardy plucked a long ball out of the air after staying onside, then teed up Maddison who cut inside and curled powerfully into the bottom corner. Weghorst could have leveled after that but went wide from a few yards out. Vardy had the final word, steering his header in from close range after Barnes’ cross.

Blackpool’s Jake Daniels will be ‘inspiration to many’ after coming out, says PM