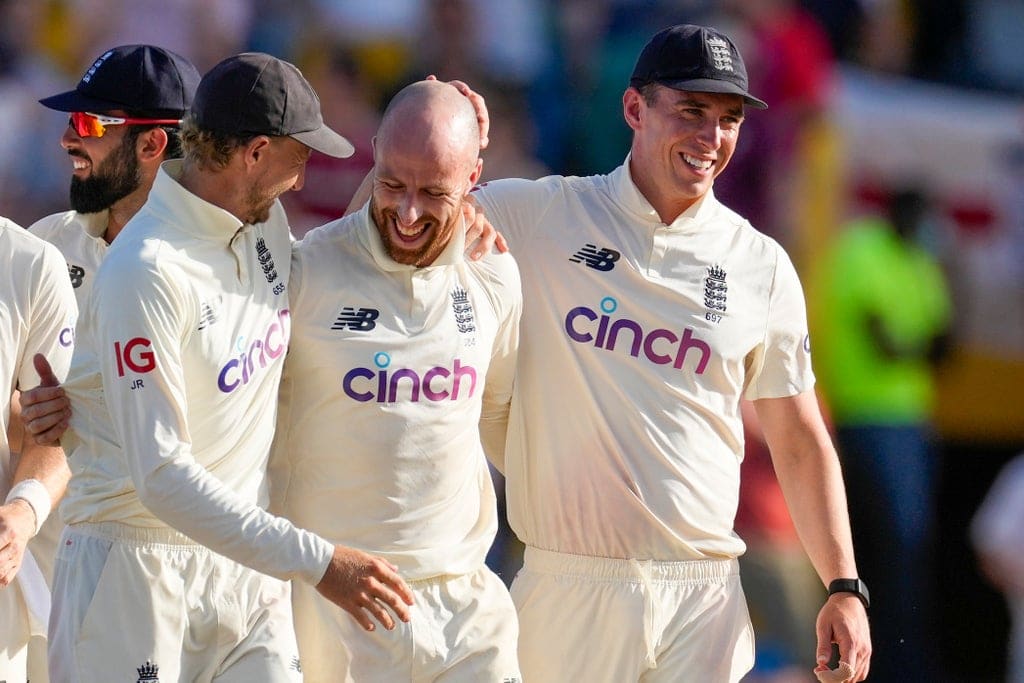 Three months on from a “horrible” Ashes experience in Brisbane, a leading role in the West Indies has finally allowed Jack Leach to feel at home in the England side.

Leach’s fingerprints, and specifically his finger-spin, have been all over the two drawn Tests in Antigua and Barbados.

He is the top wicket-taker in a batting-friendly series with 11, four clear of the chasing pack and six ahead of opposite number Veerasammy Permaul, and is even further clear in terms of workload.

At the Kensington Oval last week he sat down a remarkable 94.5 overs – the most by an Englishman in a single match since Tony Lock in 1962.

And while he has not been able to bowl the team to victory on a pair of lifeless surfaces – a third chance awaits on a better looking pitch in Grenada from Thursday – his role has visibly grown.

In Australia he was used more sparingly across three games, starting at the Gabba where he was smashed around for 102 in 13 wicketless overs. The shadow of that onslaught lingered over the rest of his involvement, and cost him a place on a turning track in Adelaide, but the 30-year-old has come through the experience with a clearer mind.

“I felt horrible after Brisbane, yeah. Not a good moment,” he said.

“But sometimes the worst thing you can do is just sit in your room and stew about it. I trained the next day after the game – let’s do something about it, that’s normally the best thing. I’ve surprised myself with how I’ve dealt with the lows.

“Australia was a really tough trip for everyone but I did feel like I learned a lot and I came back really motivated and buzzing. I want to reach my ceiling as a cricketer, basically, and put everything into that. Then I can rest easy that I’ve given it everything.”

Leach appears to be one of the most obvious beneficiaries of England’s much trumpeted ‘red ball reset’, appearing as secure in the role of first-choice spinner as he has ever been.

The result is a less pre-occupied, more focused cricketer.

“Before, I’ve felt a lot of pressure on my own individual game and it was just about trying to keep my place in the team. You can kind of forget that you are contributing to something bigger,” he said.

“It almost takes the pressure off your own game when you are playing for something bigger than yourself. I said openly to the group that at Somerset I feel I belong, so I feel more comfortable giving my points of view, maybe because I felt I belonged in terms of what I offer on the cricket field.

“But we all have stuff to offer, we wouldn’t be here if we are not good enough. I think maybe I got it a bit wrong beforehand. Not on purpose or from a selfish point of view…I just felt I was playing for my spot.

“I’m trying to become the frontline spinner for England and I really see the last couple of weeks as really valuable for my development on that road.”

England are crossing their fingers for less benign conditions for the series decider in St George’s. Seamers Craig Overton and Ollie Robinson, who are both expecting to be fit for the game after missing out through injury and illness in Barbados, trained with batter Ollie Pope on Tuesday and reported some encouraging signs of grass on the match strip.

Any assistance in unsettling West Indies skipper Kraigg Brathwaite would be welcome, after he faced 673 deliveries in Barbados. Just one of those dismissed him, Leach finally sneaking one through after more than 200 attempts in the first innings before drawing a blank in the second.

“It was a lot of overs!” he said of their lengthy battle.

“The fingers get stiff, your neck in the morning, just getting them going, it just a general tiredness throughout the body. It’s easy to feel sorry for yourself at 40-odd overs and you’re like ‘God, when is this going to end?’ But I was pleased with how I managed to get back out there and put in another decent performance.

“It’s something I’ve never had to do before. It was challenging but those are the kind of challenges that I want.”