Mario Balotelli has an indelible association with the Manchester derby.

From goading Rio Ferdinand at Wembley after the 2011 FA Cup semi-final to the bathroom fireworks display, T-shirt and goals of the 6-1, Manchester City fans think fondly of Mario every time the famous fixture comes around.

But his final involvement against Manchester United was one to forget. Balotelli’s form and father/delinquent son relationship with Roberto Mancini was only heading in one direction by December 2012.

Mancini still had one more show of faith in his magnificent and maddening protege, benching Carlos Tevez and Edin Dzeko to start him alongside Sergio Aguero.

Balotelli was hopeless and his manager angrily substituted him after a backheel to no one in particular, with City 2-0 down in a game they would lose 3-2. The following month he was packed off to AC Milan.

Jack Grealish’s situation under Pep Guardiola is far calmer and infinitely more functional. But there was an echo of Mancini’s call of almost a decade ago when Guardiola plumped for his much-discussed, maverick talent for a must-win derby.

It was easy to imagine the headlines if City slipped up and Grealish was part of the general malaise, alongside the reactions of Simon Jordan and any of the other usual critics.

But this was a performance that made good on Guardiola’s repeated claims that his record signing is playing well and doing exactly what he asks of him.

The main Balotelli parallel, in the end, was the surplus of swagger in everything Grealish did. It was there in his sumptuous midweek goal against Peterborough United in the FA Cup and he brought it to the biggest stage against City’s bitter rivals.

An early dribble down United’s porous right-flank led to the opening goal, Grealish’s link-up with Bernardo Silva a little reminiscent of how Samir Nasri and Aleksandr Kolarov combined for Sergio Aguero’s volleyed opener in the 2013 derby.

Kevin De Bruyne was left with a more straightforward finish than Aguero, given Bernardo rolled a measured delivery across the box as opposed to trying to murder the ball as Kolarov did.

Grealish then got back crucially in his own box to beat Aaron Wan-Bissaka to the rebound from a Fred attempt that was sharply saved by Ederson. Even when he’s back in his own box, he wins fouls. He it’s a talent.

Jadon Sancho, United’s big-money buy from last summer, netted a fine equalizer but, instead of cowering under the harsh glare of the comparisons to come, Grealish joined kindred spirits De Bruyne and Phil Foden in dragging the match back into City’s favor. 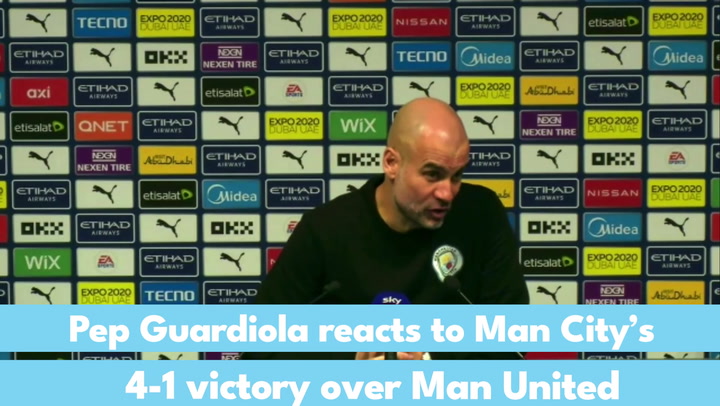 Grealish’s link with Bernardo down the left channel, where Foden frequently came out to join in with the fun, resulted in the sort of carnage from which some United careers might never recover. Wan-Bissaka, Scott McTominay and the beleaguered Harry Maguire were among the victims.

A harum-scarum first half gave way to City inflicting humiliating domination upon their neighbors during the second period. Grealish was key to Guardiola’s men tightening the screw.

He started dropping into midfield and cruising through the disheveled mess of red shirts, teeing up Riyad Mahrez for a blocked shot in the 54th minute. It became a familiar sight, particularly after Mahrez made it 3-1 and United gave up the ghost.

An implausible 15 minutes spell towards the end of the game where City enjoyed 92% of possession owed plenty to Grealish, whether he was holding up play on the flank or sauntering infield to pick a pass.

All that was missing was a goal, which would have absolutely brought the house down. Instead, the Etihad masses happily settled for a prolonged Poznan and Mahrez booting his second in via David de Gea’s face. Grealish’s box office moment is surely still to come in this high-stakes run-in.

As Guardiola has been at pains to point out, Sunday was far from the first time Grealish carried out a tactical plan impeccably. But it was the first time he’s done so with such elan in a sky blue shirt.

Just like Balotelli all those years ago, he was the City player on derby day who you just couldn’t take your eyes off.

Do you think Sunday’s demolition derby marked Jack Grealish’s best display for Manchester City? Follow the City Is Ours editor Dom Farrell on Twitter to get involved in the discussion and give us your thoughts in the comments section below.