If you were a Tory MP, what would you do? I know what you might well say to that. But just bear with me, because the question really isn’t very easy to answer. And obviously it matters a good deal.

It’s like this. Lots of people seem to think that the choice currently stands between keeping Johnson or getting rid of him. If you want shot of him then, then obviously it helps if at some point you express your lack of confidence in Big Dog to Sir Graham Brady, the chairman of the backbench 1922 Committee.

Then there’s a vote of confidence, Johnson loses, and the party gets itself a new and better leader. So does the country, but that’s of lesser significance. You get to keep your seat or a job in government.

But what if you and your colleagues force a vote of confidence – and then Johnson survives? Say 48 per cent of the eligible MPs vote join you and vote to sack him – but 52 per cent opt ​​to keep faith with him, against all common sense. Even given a secret ballot (presumably not that secret, mind you), the payroll vote and the MPs who still sincerely think Johnson is a brilliant PM and even better campaigner could still keep him in office.

Then what? Well, then you have a wounded leader, limping on with the public knowledge that almost half of his own MPs don’t think he’s the right man for the job, and so useless that they think any of the possible replacements would be better.

Despite pleas for the party to come together, move on and get on with the job, most of Johnson’s backbenchers will have voted against him, and his ministers grudgingly backed him. The backbench MPs will be unwilling to defend the indefensible any longer. They want to hold their seats, they judge that Johnson is electoral poison, so they will be keen to keep their distance from him. It would be the opposite of the 2019 Boris Effect. So you’ll carry on slagging him off.

Now consider this. After the close leadership poll win, Johnson defiantly carries and, whoops, he gets himself into another scandal. Or scandals in fact, because the one thing we know about Johnson for sure is that he does have a habit of getting himself into scrapes, and embarrassing ones at that. Often as not, he appalls the public, who seem increasingly reluctant to grant him the benefit of the doubt. Does anyone think he, a dirty old dog of 57, is going to change his habits now?

Already, since the publication of the Sue Gray report, there are plausible suggestions of more shameful activity – attempts to nobble Sue Gray and “tweak” her report. There are persistent questions about the “ABBA party” in Boris and Carrie Johnson’s Downing Street flat. The Met Police faces a judicial review of their handling of that and other matters. There’s possibly another rule-busting flat-based party, for Johnson’s 56th birthday, after the lunch time “cake ambush” for which he was fined.

The Commons privileges committee is next to go after him and determine whether Johnson lied to parliament, and subsequently lied about not lying to parliament. More evidence will come out. He’ll be publicly questioned and his answers will be devoid of logic, because they always are.

If the Committee called him a liar he’d still try to hang on, and it would take a parliamentary vote to petition the Queen to sack him – just the kind of constitutional crisis she (and we) can do without. If they sanction him short of calling him a liar and recommend he is suspended from parliament, and the Commons agrees, he could face a recall petition and by-election in his Uxbridge and South Ruislip constituency, currently far from safe.

There’s surely more trouble to come. (I for one would like to know who advised him and who paid the legal bills for Johnson’s Partygate defences). All this is besides the routine U-turns and policy chaos, and goodness knows what else. It doesn’t really matter about the details, another scandal, and another and another will follow the Cummings scandal, wallpapergate, the Paterson affair, “let the bodies pile high”, pet rescue from Kabul, and Partygate, because this is one Big Dog who cannot change his spots, and refuses to be housetrained.

So at that point, does the parliamentary party decide to have yet another vote of confidence in Johnson, with all the division and recrimination that entails?

Even if they did want to, and another 54 plus Tory MPs demand a confidence vote, under the rules Johnson is safe for 12 months after winning the previous vote, no matter how narrowly – 50 per cent plus one is sufficient. It is true that the twelve-month rule didn’t save Theresa May in similar circumstances, after she received the support of just 200 out of 317 Tory MPs in December 2018 – she tearfully quit under pressure the following May, not least evacuating Johnson’s plotting ). But Johnson is not May, and he’ll need a firmer push.

Johnson is giving the impression that he’s a cornered, snarling, rabid sort of Big Dog, and he’s not going quietly for anyone, in a gray suit or otherwise. There’s always a chance he might win a second confidence vote when it eventually arises. If the first confidence vote was this autumn and the next one therefore in autumn 2023, you would be getting perilously close to the next election, even without allowing for a protracted leadership election. So what do you, the Tory MP, do then?

Leaving aside the fate of Johnson – or the United Kingdom for that matter – your chances of survival as an MP or a minister in a Tory government will have actually been made worse by the constant leadership speculation and periodic crises and make-or-break confidence votes, ie compared to just putting up with Johnson until the general election.

The very fact that he won’t give up without the mother of all mud-slinging struggles – including counter-threats by local parties to deselect “disloyal” MPs – makes it counterproductive to even try to remove him. He’ll be like the then-leader and PM, John Major, equally tenacious, was in 1995 after Major induced his own “put up or shut up” leadership election. It was a gamble (and I therefore sometimes imagine Johnson might follow suit, but he seems too cowardly).

Major received a tepid 218 votes against the respectable 89 MPs who backed his opponent, John Redwood. As with May in 2018-19, the spin doctors insisted it was a fair fight, exceeding expectations (which had been massaged down) and a triumph; but they and everyone else knew it was a humiliation, and an ominous one at that.

See also  Three seats in front of the bench: new installment of the chronicles of Emmanuel Carrère since the trial for the attacks in Paris | Culture

So it’s not a great time to be a Tory MP, and actually tougher than it looks, because anything you now do to try and drop the PM might make things far worse. In the unlikely event that there are no more scandals and revelations ready to engulf Johnson, there’s still a cost of living crisis, double-digit inflation, strikes, mortgage hikes, a recession, a trade war with Europe, cuts to public services, Northern Ireland edging back to violence and the break-up of the UK to come – none obvious vote winners.

Meanwhile, Labor and the Liberal Democrats are both simultaneously in good health, something that hasn’t happened since 2001, and people have rediscovered an appetite for anti-Tory tactical voting, so enraged are they by Johnson’s very existence. All a hapless Tory MP has got to fire back with are policies copied from Labour, “beergate”, some irrelevant dog whistle and culture war stuff about trans rights, Channel 4, Rwanda and Brexit, and bringing back pounds and ounces. Oh, and they want to destroy the BBC. All acts of childish indulgence and/or spite dressed up as government. In terms of ideas, if nowhere else, our rulers are experiencing poverty.

It’s very difficult to see a way out of the present predicament for the Conservatives, whether or not they decide to euthanize Big Dog. They are simply clapped-out, exhausted by 12 years in power, Brexit and Covid. It is like watching one of those time-lapse films of something decomposing – inexorable and not very pretty. We’ve reached the remarkable situation where the Tories cannot win the next election, no matter who is in Number 10, because they are in a terminal decline. Who saw that coming? 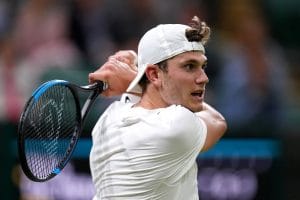