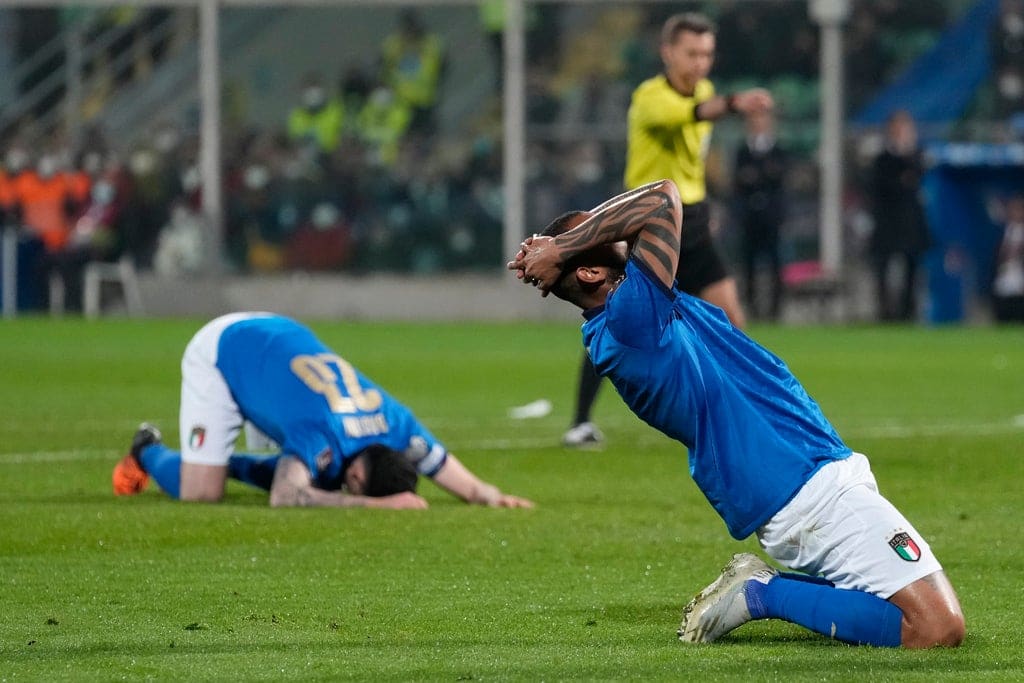 Heartache for Italy and this time it’s not coming Rome after the ultimate humiliation of a 1-0 World Cup play-off defeat at home to North Macedonia. Despite instinct, some connected to England will have little to cheer, even if one major contender to lift the Jules Rimet Trophy at Qatar 2022 has been cleared. Instead, minds drift to last summer’s Euro 2020 final defeat and what might have been.

A home final for a first major piece of silverware since 1966, slipped away against what will forever be known as Este Italy. An Italy capable of the spectacular but ultimately deeply flawed after a second consecutive failure to qualify for the World Cup, sandwiching that fateful night for the Three Lions at Wembley.

And while last night was a shock, there was a nervous tension in Sicily lingering for far too long as the Azzurri probed against their inferior opposition. Then the inevitable happened, leaving utter despair in the Italy camp after an Aleksandar Trajkovski thunderbolt in stoppage time condemned Roberto Mancini to the most sobering of comedowns in recent memory.

Less than nine months ago Italy had spoiled the Wembley party, agony for England after penalties. And if Gareth Southgate and everybody watching didn’t already know the Three Lions had spurned a glorious opportunity, they do now. Italy’s fluctuating form over many years, even if they did put together a 37-game unbeaten streak, further intensifies England’s regret, though it may fuel motivation to seize redemption later this year too. Their pain should also shine a light on Southgate’s ability to cruise through qualification, something that has routinely been under-appreciated.

Italy’s trend between European Championships and World Cups, having failed to qualify since Brazil 2014, is peculiar. Missing out on Russia 2018 was a first in 60 years. This is World Cup royalty with four wins only behind Brazil’s five. And yet, despite a mostly unspectacular generation of players, special coaching from the likes of Antonio Conte and Mancini has led to one European Championship and it very well could have been two.

Now without the injured Federico Chiesa though, Italy lacked a spark and could no longer obscure their lack of genuine attacking quality or imagination.

Chiesa was masterful at last summer’s tournament, but Italy clinched glory through some of their traditional qualities, which many would say is in their DNA. Their sheer tenacity to compete and not be overwhelmed when England had considerable momentum springs to mind.

That Azzurri have always had that, married with tactical intelligence and discipline, enabling them to often squeeze every ounce of potential out of their team should they qualify for a tournament. Following Luke Shaw’s early opener at Wembley, Italy refused to collapse, but even still England could have emerged victorious had they not been undone by a corner, allowing Leonardo Bonucci to react fastest.

That will haunt Southgate and co. more after watching Italy complete what has been a dreadful qualification campaign, illustrating the importance of holding your nerve. Italy did that day, but have shown they can spectacularly lose it just as often, with Jorginho admitting his last-minute missed penalty against Switzerland to advance in the group stage will “haunt me forever”.

So while there was plenty of schadenfreude after North Macedonia’s triumph, with the final play-off against Portugal to decide who advances to the World Cup, the realization of what was lost must light the fire for England in Qatar.