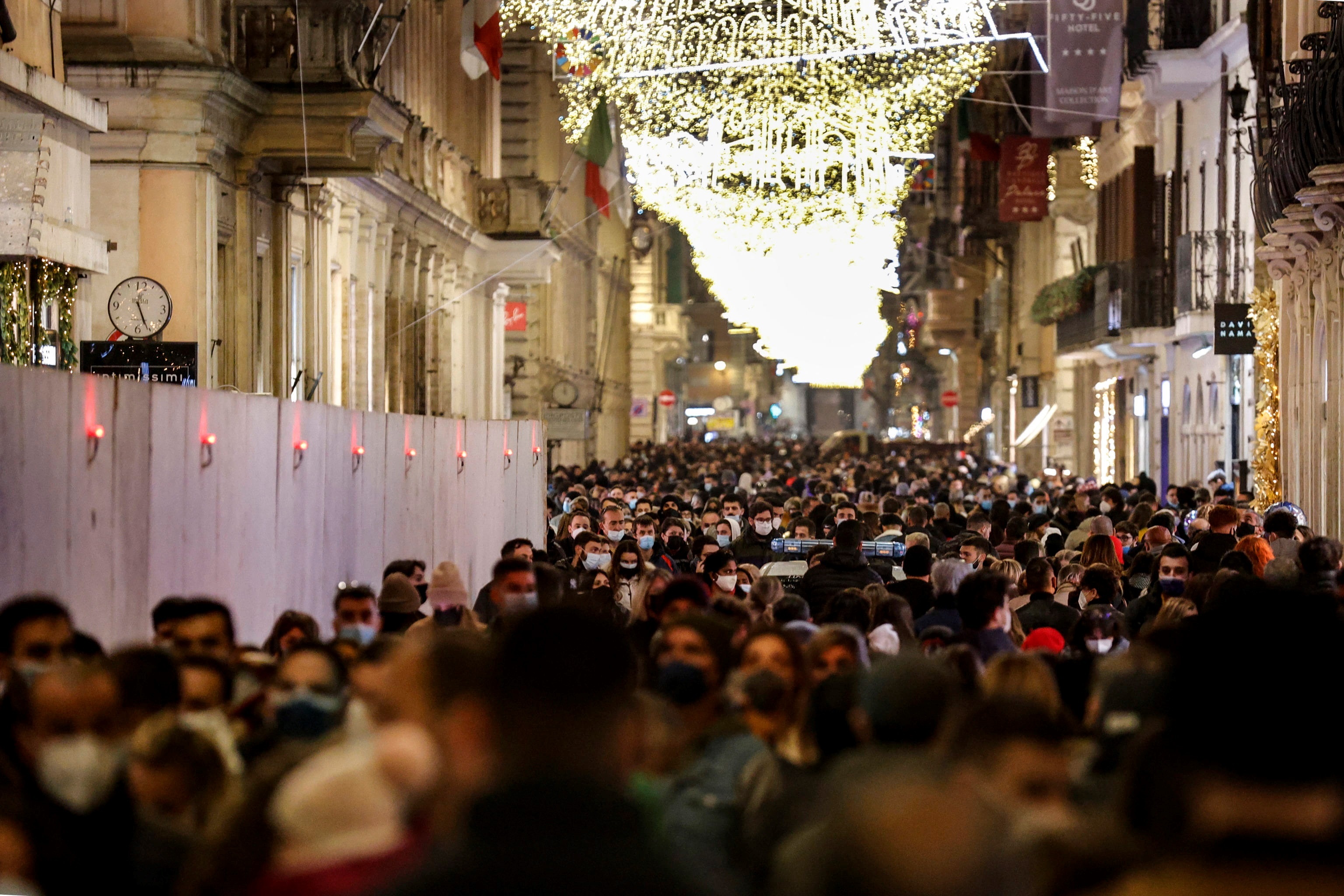 The Italian Government has reacted to the high increase in covid infections in recent days with new restrictions, to save activity during the Christmas holidays. Among other measures, it has decreed the use of outdoor masks throughout the country and a series of limitations on leisure activities, which can only be accessed by vaccinated people or those who have overcome the infection. Discos and dance halls will also close until January 31. The Minister of Health, Roberto Speranza, has invited the population to get vaccinated “as soon as possible”, given the high spread of the virus and the high risk of contagion from the new omicron variant.

The transalpine country registered on Thursday the highest number of infections since the beginning of the pandemic, with 44,595 new infections. So far, the highest peak of confirmed cases had occurred on November 13, 2020, when 40,902 were detected, although at that time much fewer diagnostic tests were being performed (254,000 compared to more than 901,000 performed since Wednesday). The difference in deaths between the two dates is also notable: 168 registered this Thursday, while that November 13 they amounted to 550.

After consulting with the expert committee that advises him, Mario Draghi’s Executive decided to decree the use of the mask outdoors throughout the country until January 31. Until now, they were only mandatory outdoors in the regions that were in the yellow or orange zone – currently most are in the white zone, except for Calabria, Friuli-Venezia Giulia, Liguria, Marche and Veneto, which are in the zone yellow – or in the center and crowded places of some cities such as Rome or Turin.

Discos, dance halls and similar venues will remain closed until January 31 and parties, concerts or any type of event that involves crowds in outdoor spaces may not be held either. Several cities such as Rome, Florence, Milan or Turin had already canceled the public celebrations planned for New Year’s Eve. The Government had considered other restrictions for nightlife, such as access only for vaccinated with the third dose, but has finally opted for its closure.

Only those vaccinated or those who have passed the infection will be able to consume inside bars and restaurants and enter museums, cinemas and theaters, although in the latter it is not possible to consume food or drink. For cinemas, theaters and venues where live shows or sporting events are held, both indoors and outdoors, it will be mandatory to wear FFP2 protective masks. The same is true for means of transport, from trains to planes, through boats, trams, subways and all public transport.

In addition, from February the validity of the covid passport will be reduced from nine to six months, which certifies that the carrier is vaccinated, has passed the infection or has had a detection test with a negative result in the last 48 hours. This sanitary pass is practically essential for daily life in Italy, since it is also mandatory to go to work. The minimum time to apply the third dose is reduced from five to four months, on the express recommendation of the scientists who advise the Government.

The Executive of Mario Draghi is also considering expanding the mandatory vaccination. So far, it is only for health workers, teachers, the military, and law enforcement. “It is a measure that has never been excluded,” confirmed the prime minister.

A study by the Higher Institute of Health has confirmed the rapid spread of the omicron variant of the coronavirus and has estimated that the new mutation is responsible for at least 28% of the new positives registered in the country, when just two weeks ago it only appeared in 0.19% of the cases.

On the other hand, given the high demand these days, it is increasingly difficult to manage coronavirus detection tests. Healthcare companies are not capable of doing all the molecular tests they would like, pharmacies cannot reach all requests for antigen tests, and self-diagnostic tests are out of stock in many places.

The demand for these tests was already high, since the unvaccinated – at least seven million people – needed them to go to work or for a large number of activities. But with the increase in infections, the rapid spread of the omicron variant and the proximity of the Christmas holidays and family gatherings, the requests have skyrocketed. Only last Tuesday, Civil Protection registered 640,000 antigen tests, when a month ago, on November 23, 100,000 fewer were made.

The growing demand for tests worries health authorities and family doctors, who are beginning to have difficulties diagnosing the virus. In addition, there is less and less contact tracing of positive people and the time it takes to identify suspected cases, even when they are symptomatic, has lengthened.

See also  Manchester United vs West Ham Prediction and Odds: Goals on the menu in a pivotal top four clash