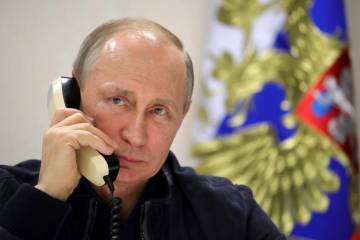 European entrepreneurs are in a bind. Top executives from some of Italy’s biggest companies, including Enel and Unicredit, met virtually Wednesday with Vladimir Putin to discuss economic ties with Russia. With a possible invasion of Ukraine looming, the Italian government was unimpressed, putting pressure on the group to cancel the meeting. The corporate conundrum makes other European companies with heavy exposure to Russia, especially Germany, nervous.

US President Joe Biden on Tuesday threatened Russia with export controls and other harsh sanctions if it invades Ukraine again. Russia denies such plans, but has 100,000 troops concentrated on the border with Ukraine. Despite the harshness of his speech, the European Union will find it difficult to block Moscow’s path economically.

For example, trade. Germany exported 22 billion euros of goods to Russia from January to November last year, second only to China, and considerably more than the 15 billion dollars shipped from the United States. Others are not far behind. Italy is reluctant to lose its 10,000 million euros of exports to Russia in the same period, about 1% of its GDP. France sent a similar amount.

In the other direction, Russia is the main supplier of oil, natural gas and coal to the EU. But while Germany obtains up to three quarters of its non-EU natural gas imports from Russia, the proportion is less than half in the case of France and a quarter in Spain, according to Eurostat data. Therefore, Germany has more incentive to avoid a gas embargo.

Companies such as Italy’s Pirelli, whose boss responded to Putin’s call on Wednesday, also invest directly, with factories in the country of 145 million people. Unicredit and France’s Société Générale both own Russian banks, although Unicredit has cooled plans to buy another. The EU invested €311 billion in Russia in 2019, according to the European Commission. Flows slowed a lot in 2020, but Germany remained Russia’s biggest foreign investor, with 26 projects, according to EY consultants.

Retired European politicians strengthen ties. Former German Chancellor Gerhard Schröder is president of the Russian state oil company Rosneft and is part of the shareholders’ committee of Nord Stream, a subsidiary of Gazprom. Former Austrian Foreign Minister Karin Kneissl is also on Rosneft’s board of directors. Former French Prime Minister François Fillon has ties to petrochemical giant Sibur. These figures could well be pushing against tougher sanctions on Russia and its already stagnant economy. All this works in favor of Putin.

The authors are columnists for Reuters Breakingviews. The opinions are yours. The translation, by Carlos Gómez Abajo, is the responsibility of Five days