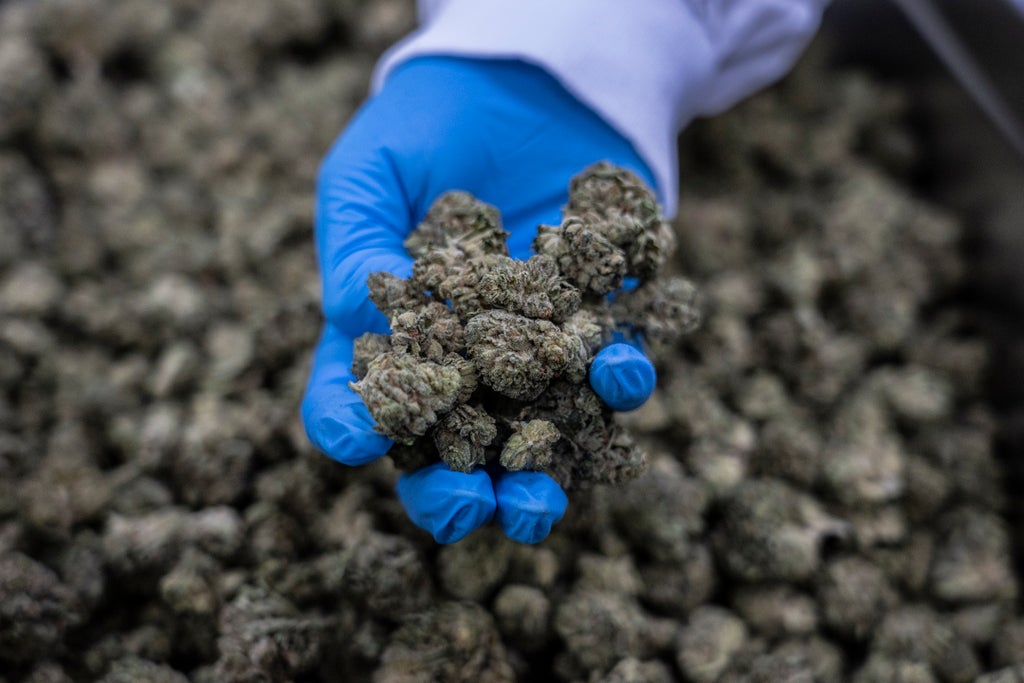 Not too long ago, Ehud Olmert was trying to lead Israel to a historic peace agreement. These days, the former Israeli prime minister is pushing a different message: legalize marijuana.

Olmert is among a group of former Israeli leaders and security chiefs who have found new careers in the country’s tightly controlled medical cannabis industry. They hope not only to cash in on the local market, but also to clear the way for the country’s major marijuana producers to export.

“Everything will change dramatically overnight if there will be legalization,” Olmert, an adviser to the start-up Univo, told The Associated Press. In Israel alone, he said, “the market would be unlimited. It would be huge.”

Israel is one of the world leaders in medical cannabis consumption and marijuana possession is decriminalized. Yet tight regulations govern research, cultivation, procession, distribution and the sale of cannabis. These tight curbs, many say, have prevented turning domestic production into a major cash crop.

Over 100,000 Israelis have permits to consume medical cannabis, according to the Health Ministry, a 16-fold increase in the past decade. The boom is in large part thanks to a reform that took effect in 2019 making it easier for doctors to prescribe cannabis to people suffering from chronic pain, cancer, PTSD, epilepsy and other conditions.

Medical cannabis consumption in Israel grew to 43 metric tons last year, from 28.5 million tons in 2020, according to the Health Ministry. Israel’s medicinal cannabis market was valued at around $264 million in 2021, roughly $7 million less than the entirety of Europe according to Prohibition Partners, an industry analysis firm.

Despite the numerous Israeli companies producing medical marijuana, Israel imports more than half of its supply.

Golan Bitton, chief executive of Univo, said much of the locally grown supply is low quality that does not meet the expectations of Israeli consumers.

Last year, he said his company had to incinerate around 600 kilograms (1,300 pounds) of cannabis that didn’t meet the grade. Univo began importing marijuana from Canadian cannabis titan Tilray to pick up the slack.

Univo is one of a few companies in Israel that has full vertical integration from farm to pharmacy. His company’s facility is housed in a nondescript warehouse in the industrial zone of the southern city of Ashkelon The clean-rooms where buds are processed are heavy with resinous pungency.

Bitton said the facility is capable of testing, processing and packing up to 80 tons per year. But due to bureaucracy in the last year it only handled around six tons, some of it imported. Like other companies in Israel’s cannabis industry, he said Univo is primed for the moment regulations change.

That is where Olmert and his counterparts come in. Olmert spent decades as Jerusalem’s mayor, a member of parliament, Cabinet minister and prime minister from 2006-2009 before a corruption conviction sent him to prison for 16 months. The company is hoping that Olmert’s public profile and intimate knowledge of Israeli bureaucracy can improve the business atmosphere.

“I really think that there is no reason, except for some fears and obsessions and prejudices, that keeps (away) the complete legalization of cannabis,” Olmert said.

“It’s a market of several hundred million dollars, just in medical, and it’s growing very fast in Israel,” said Barak, who became chairman of cannabis manufacturer Intercure in 2018. “I expect that once it will be legalized, we will see a flourishing of the market for extreme, top-quality products.”

Livni and Peri’s offices did not return messages, and Danino declined interview requests.

There are over 110 cannabis-related companies in Israel that have raised $348 million in investment since 2015, according to figures from Start-Up Nation Central, a nonprofit that promotes the local technology sector.

But Israel maintains tight restrictions on exports — particularly to major markets in Europe and North America. Israel exported a comparatively meager 663 kilograms (1,462 pounds) of cannabis last year, according to the Health Ministry.

Lilac Mandeles, the Israeli CEO of the TechforCann Europe cannabis accelerator, said that while Israel is a research leader, the business climate is “not optimal” for products and services.

She launched her company in Malta last year after determining the island nation offered a friendly business environment, 2.5 million euros in funds under a program for cannabis start-ups, and a critical gateway to European markets.

“Supporting early stage initiatives is challenging in Israel in general,” and cannabis is no exception, Mandeles said.

Lawmakers are now working to pass legislation that could loosen regulations they say would benefit both businesses and consumers.

Sharren Haskel, a coalition lawmaker with the New Hope party, has championed cannabis decriminalization. She heads a parliamentary committee working to streamline regulations that she says will “put Israel back on the forefront” of the industry.

The reforms are expected to remove bureaucratic hurdles for scientists studying cannabinoids, ease restrictions on exports and authorize the marketing of CBD — a legal cannabis-derived compound in much of the US

She said red tape “has choked the entire market” and driven firms overseas. “It’s almost impossible to have clinical research here in Israel,” she said.

It remains unclear whether Haskel’s reforms will approve. But Saul Kaye, an Israeli cannabis entrepreneur who runs a chain of dispensaries, said he remains hopeful.

“I think Israel has got a lot of magic in its cannabis industry, we are just lost right now,” he said.