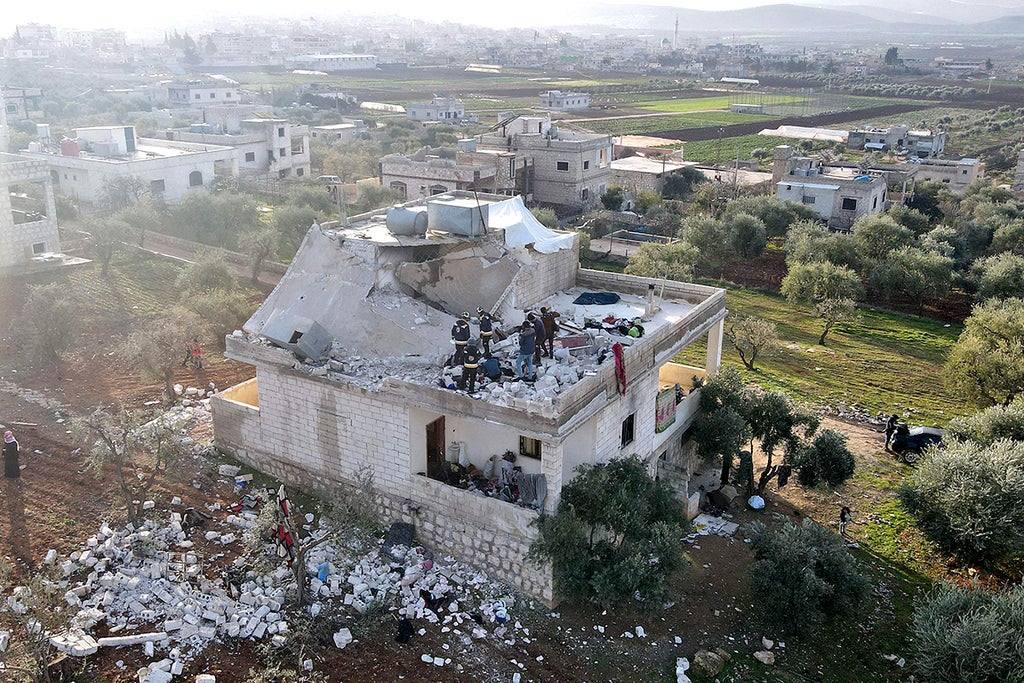 The leader of Isis was killed during a nighttime raid by US special forces in northwest Syria in the early hours of Thursday morning, US president Joe Biden announced.

Abu Ibrahim al-Hashimi al-Qurayshi, who had led the terror group since the death of his predecessor in similar circumstances a little over two years, detonated a bomb that killed himself and his family as US forces surrounded a residential building where he was hiding in the town of Atmeh, just across the border from Turkey, Mr Biden said.

“Thanks to the bravery of our troops this horrible terrorist leader is no more,” Mr Biden added later in remarks at the White House. He also accused the militant of being the “driving force” behind the genocide of the Yazidis in northern Iraq.

Rescue workers on the ground awning The Independent that 13 people were killed in total, including six children and four women. US and Iraqi officials blamed the bomb detonated by the Isis leader for the deaths of the women and children, but accounts of military operations given by US officials are often inaccurate, and later contradicted by evidence from the scene.

The US operation comes just a week after US officials said Qurayshi orchestrated one of the largest Isis attacks since the fall of the terror group’s caliphate, which once stretched across vast swathes of Iraq and Syria. The attack lasted for 10 days as dozens of Isis fighters laid siege to a jail holding their comrades in Syria’s northeast, and had sparked warnings of a resurgence for the terror group.

The raid to kill Qurayshi had been months in the planning, however, a senior US administration official told The Independent. It began shortly after midnight, which is when residents of the Syrian town of Atmeh were awoken by the deafening buzz of helicopters close above them. Those aircraft were carrying a team of around 50 US commandos, who disembarked and surrounded a residential building. Through loudspeakers, the soldiers called in Arabic for the people inside to surrender.

Local resident Sima, 22 (not her real name) said they moved away from the windows as a precaution.

“We heard a voice from loudspeakers saying the woman and children should get out of the house that was being targeted. But we didn’t know which house was the target,” she told The Independent.

Thousands of miles away, in the White House situation room, President Joe Biden, Vice President Kamala Harris and top US generals followed the operation closely. Mr Biden had given the final order to take out Qurayshi on Tuesday.

But just as soon as the operation began, the world’s most-wanted militant leader carried out the task himself, detonating a bomb that killed himself and his family, according to the US account of the attack. The blast threw bodies onto the street below.

Sima, who lives nearby, heard the battle from her home.

“We heard the sound of clashes and fighting. First the aircraft, then the sound of shelling then at 2am what sounded like machine guns from the helicopter,” she said.

The US military had been watching the house where Qurayshi was killed for months. It was located in Atmeh, an area controlled by Syrian opposition forces dominated by Hayat Tahrir al Sham, formerly the Nusra Front, which was formerly linked to Al Qaeda. The former Isis leader, Abu Bakr al-Baghdadi, was killed in a US-led operation just 10 miles from Atmeh in October 2019.

US forces knew Qurayshi had lived there with a lieutenant, that couriers came in and out of the building, and that he was still directly overseeing Isis activities across Iraq and Syria, according to the senior administration official.

As early as December, US intelligence had created a tabletop model of the building where they believed Qurayshi was hiding, the official told The Independent.

A civilian family was living on the first floor, while al-Qurashi and his lieutenant — along with their families — lived on the second and third. It was due to this risk posed to the family that Mr Biden ordered an air assault operation, rather than an airstrike, according to the official.

Anticipating that he would detonate explosives rather than be caught, engineers studied the structure to figure out if it would collapse in such an event.

“We had high confidence that the building would remain structurally sound,” the official told The Independent. “I doubt he knew that when he set off that detonation.”

The Isis leader detonated what is believed to have been a powerful explosive belt early into the operation. The fighting did not end with the Isis leader’s death, however. Qurayshi’s lieutenant barricaded himself and his family in a room on the second floor and engaged with the US commandos.

During that battle, four children escaped from the room and were brought to safety, according to the senior administration official. The Isis lieutenant and his wife were eventually killed, and the official added that “they may have had their children with them in that room.”

Before leaving the scene, US forces took fingerprints and DNA, which confirmed Qurayshi’s death, officials said.

“Most of the second floor is now missing, inside there was a lot of destruction,” she said. Videos taken from the scene and shared online showed blood-smeared walls.

Towards the end of the two-hour mission, the senior official said one US helicopter was attacked by hostile forces on the ground, possibly Hayat Tahrir al-Sham, which controls the area.

“They engaged one of our helicopters and we took action and killed at least two enemy in action,” the official said.

The killing of Qurayshi is likely to deal a significant blow to the terror group just as it was beginning to show signs of regaining its strength.

When Qurayshi was announced as the leader of Isis in October 2019, following the killing of his predecessor Baghdadi also by US special forces, little was known about him.

Despite Isis lauding him as a “veteran jihadist fighter”, Iraqi intelligence officials said “he had no real knowledge of combat.”

Born to an Iraqi Iman in Tal Afar, Iraq, among the youngest in a sprawling family, Qurayshi followed in his father’s footsteps building as a reputation as a preacher and propagandist: after finishing his 18-month military service in the Iraqi army he joined Al -Qaeda in Iraq, and began teaching classes on Sharia law to its members, before holding multiple religious official roles.

At some point, he joined Isis and climbed up the ranks including effectively being their minister of justice.

He is said to have leveraged his background in Islamic studies – allegedly holding a BA in Sharia from the University of Mosul – to play a leading role in writing religious rulings that “justified” some of Isis’s most heinous crimes, like its capture, mass slaughter and enslavement of the Yazidis in northern Iraq.

There are even rumors that he has pushed fellow Isis leaders to be more extreme in their views on this, through his religious writings.

He also knew the organization extremely well, after decades of involvement in the groups and its precursors. According to experts he had taken over the reins of power even before Baghdadi was killed in a US raid in October 2019, particularly after other contenders including Baghdadi’s own deputy were taken out by coalition airstrikes.

At the time of his death, the US Department of Justice had a $10m bounty on his head – he was described as one of Isis’s “most senior ideologues”.