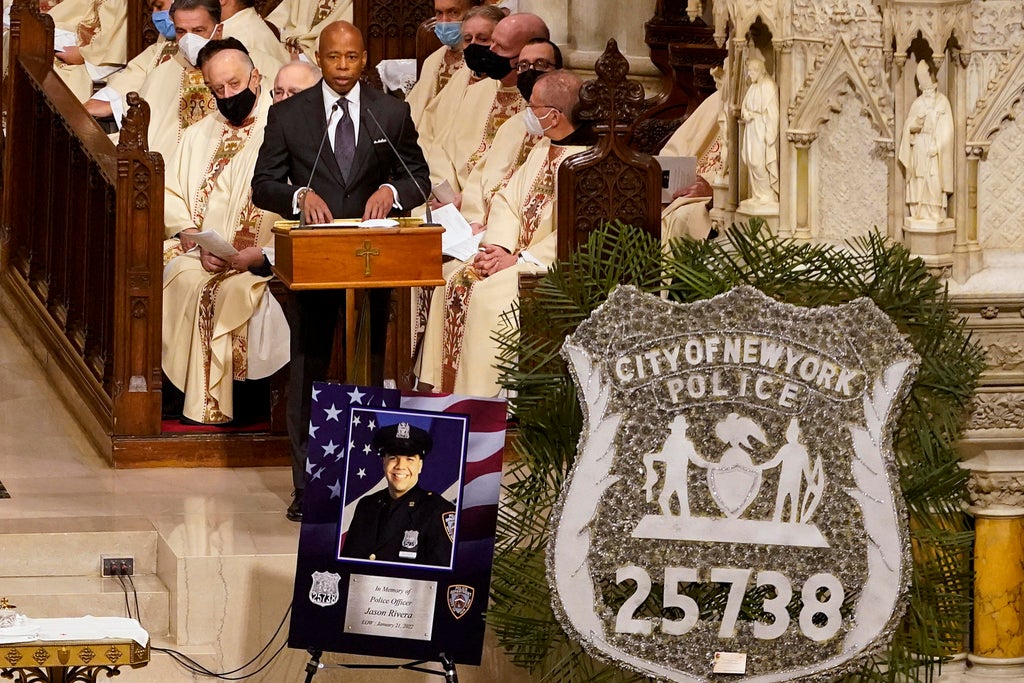 A teenage fast food cashier shot to death in Manhattan A woman pushed to death in front of a subway train in Times Square. An 11-month-old girl injured by a stray bullet in the Bronx. Two cops killed in Harlem.

A series of headline-grabbing violence in New York City has frayed nerves and become an ongoing trauma for the fledgling administration of Mayor Eric Adams.

But while January brought tragedy to the city, statistics suggest it’s still as safe or safer than it was a decade ago, when former Mayor Michael Bloomberg touted it as “America’s Safest Large City.”

New York City saw 28 murders in January, one less than the average for that month over the previous 10 years.

“In New York, it’s kind of a dual situation,” said crime analyst Jeff Asher. “It is important to know that this is not the worst it has ever been, while also understanding that it has gotten significantly worse in recent years.”

The number of people injured by gunshots has increased in New York City during the pandemic and remains stubbornly high.

But its murder rate — 5.5 murders per 100,000 people last year — has remained lower than that of the next six most populous cities, FBI and police crime data show, and also lower than that of many smaller cities like Jacksonville, Florida; Fort Worth, Texas; and Tulsa, Okla.

Adams, a former police captain who campaigned with a tough message on crime, says he’s not only fighting real crime, but also fear and the perception that crime is out of control.

Research shows that people tend to be poor at understanding crime trends and generally assume the worst, Asher said.

Adams says he wants to blanket the city with police to reassure New Yorkers and visitors alike. He also paid close attention to his old department in his first month on the job, focusing on roll call, supporting officers after recent violence and taking the lead in directing new crime-fighting strategies.

In New York, 2022 began with a series of arbitrary crimes of the kind that most disturb people.

Kristal Bayron-Nieves, the 19-year-old cashier who died Jan. 9 in a late-night robbery at a Burger King in East Harlem, moved with her family to New York in search of a better life after Hurricane Maria devastated Puerto Rico in 2017.

Michelle Go, the 40-year-old woman who was pushed onto the tracks on January 15 at the Times Square subway station, worked for global consultancy Deloitte and volunteered with the Junior League to help at-risk and homeless families. home.

The 11-month-old girl was hospitalized in critical condition after a stray bullet struck her in the cheek while sitting in a parked car with her mother on January 19, just days before her first birthday.

The slain officers, Jason Rivera, 22, and Wilbert Mora, 27, had joined the NYPD in hopes of bridging long-standing divisions between police and immigrant communities, like the ones they grew up in. .

President Joe Biden is scheduled to visit New York on Thursday to discuss ways to curb gun violence, though it’s not the only place wrestling with the issue.

Still, recent violence has brought the Big Apple to a crossroads, with elected officials rushing to show they’re tough on crime less than two years after leaders veered in the other direction after the murder of George Floyd by the Minneapolis police sparked a national reckoning. about criminal justice.

Elected as a progressive reformer, Manhattan’s new district attorney, Alvin Bragg, found himself under fire after instructing staff not to prosecute some low-level crimes, such as prostitution and some cases of resisting arrest. After a dispute with Police Commissioner Keechant Sewell, Bragg apologized, emphasizing that his office would not back down on serious cases, such as gun violence and assaults on police.

State bail reforms enacted two years ago to limit pretrial detention have become the specter of police unions and politicians.

Adams took on bail reform as an anti-crime plan, proposing that judges be allowed to consider a defendant’s criminal history and potential dangerousness when setting bail.

US Rep. Tom Suozzi, who is challenging Democratic Gov. Kathy Hochul for governor, has called on her to repeal bail reforms, as have six other Republicans in the state’s congressional delegation. US Rep. Lee Zeldin, a Republican also running for governor, even linked the bail law to the burning of an artificial Christmas tree outside Fox News headquarters in Manhattan.

The reforms included the elimination of bail for nonviolent crimes, appearance tickets instead of arrests for low-level crimes.

Hochul says she’s willing to talk about changing the law if the data shows the reform is linked to rising crime.

State Assembly Speaker Carl Heastie, a Democrat who spearheaded the bail reform bill, said he was frustrated politicians were “blaming bail reform when the sun came up.”

“I just think it’s unfortunate to tie the increase in gun violence solely to bail,” Heastie said. “If that’s the case, why do we have gun problems across the country?”