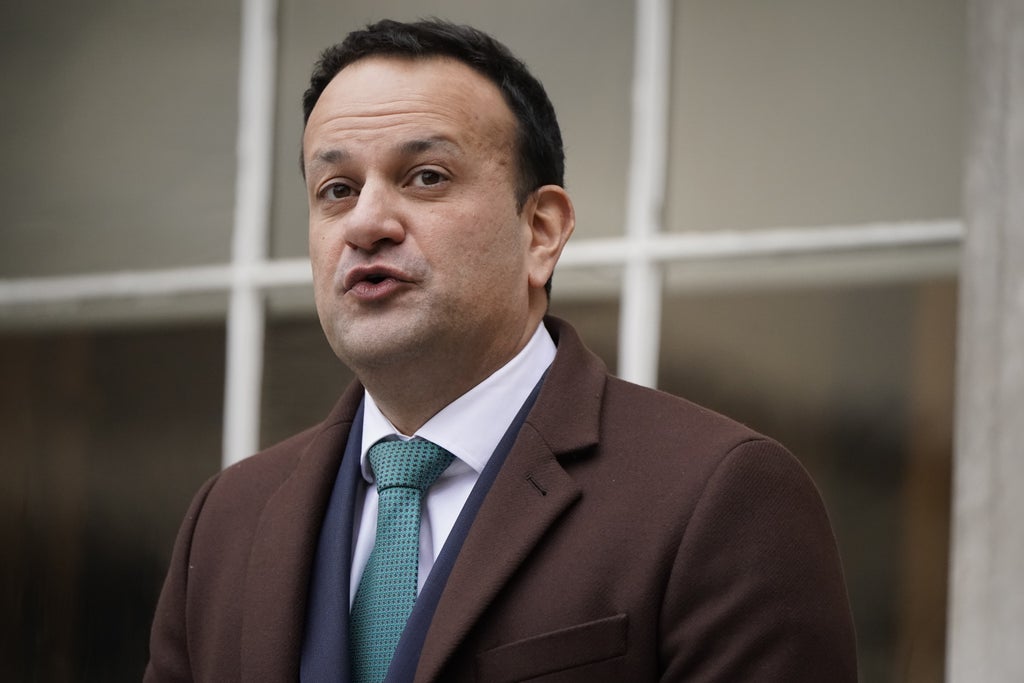 Ireland’s deputy premier has branded Vladimir Putin the “Hitler of the 21st century”.

Leo Varadkar said the invasion of Ukraine is an “atrocity” and made it clear Ireland is not politically neutral on the issue.

The EU agreed to a package of measures on Thursday and there are plans for more economic measures against President Putin and Russia in the coming days.

He said the Government will also discuss cutting the number of Russian diplomats in Ireland from 20 – based at the embassy in Dublin – to around three.

He said expelling ambassador Yuri Filatov has not been ruled out.

There were angry scenes outside the embassy in Dublin earlier on Friday as a large crowd of Irish-Ukrainians gathered outside the gates to denounce the invasion.

Irish premier Micheal Martin described the package of measures agreed by the EU so far as “comprehensive” and predicted it will attack Russia’s finance, industry, trade, energy and transport sectors.

Mr Martin said the invasion by Russia is a “gross violation” of the territorial integrity of Ukraine.

He admitted there will be “a price to pay” for European countries as a consequence of the sanctions.

“Europe has responded very strongly. In its totality it is very strong,” he said.

Mr Varadkar also acknowledged that sanctions such as banning Russia from Swift would have economic implications for Ireland.

But he said those consequences needed to be accepted given the situation in Ukraine.

“I don’t think we’re in that space where we can be concerned about the economic impact on Ireland when a democratic country in the European Union is being invaded and the attempt is being made to overthrow a democratic government there,” he told RTE Radio One.

He added: “The last time I can think of that happening in Europe is in the 1930s and I think we should see this conflict in that context.

“We knew that Putin was a bad man, we’ve known that for a long time now, but we didn’t think that he would be the Hitler of the 21st century and I think he’s putting himself into that space.”

He continued: “When it comes to this conflict, Ireland is not neutral. We support Ukraine in any way we can – short of military action.

“This is the kind of thing that we haven’t seen on this scale in Europe really since the 1930s. And it is shocking, it is immoral and it’s important that the European Union is united and that we stand up to Russia at this time.”

Earlier, speaking in Brussels, Mr Coveney condemned the “horrific images” from Ukraine, as forces in the capital Kyiv prepare for an all-out assault from Russia.

He described them as “the kind of images that I think most people on the continent of Europe felt were consigned to history”.

He added: “We are seeing a full-scale war being waged on one of Europe’s largest countries by a nuclear superpower next door, and we need to respond to that as the European Union.”

Mr Coveney also hit back at Mr Lavrov after he referenced the use of the English language in Ireland during a press conference on Ukraine.

“If in Ireland, if they prohibited English language, what would the UK think about it?” Mr Lavrov asked.

Also offering the example of the use of French in Belgium, he added: “I can’t imagine that a law like that would last for more than a couple of days or even hours.”

In a strongly worded tweet, he said Russia should not try to use Ireland to justify an “unjustifiable war”.

He said the Irish-British relationship is an example of two countries with a “difficult past” that “found a way to shape and sustain a peace process, guaranteeing an absence of violence”.

On Friday, following the protest outside the embassy, ​​ambassador Mr Filatov claimed his country’s invasion of Ukraine is a “humanitarian intervention”.

He said there is no proof that Russian forces have targeted civilians in the assault.

He claimed Ukraine has recently used diplomacy as a cover for preparing an offensive on the Donbas region of the country.

He added: “There was no other choice to end the suffering of Donbas through real humanitarian intervention – that’s what this special operation is exactly about.

“The only aim of the operation is to neutralize the ability of the Ukrainian military to inflict any more suffering on Donbas. Ukrainians should not be afraid of that.”

Asked why he should be allowed to stay in Ireland, the ambassador said: “You might ask your Government, it’s up to them. I can leave any time.”