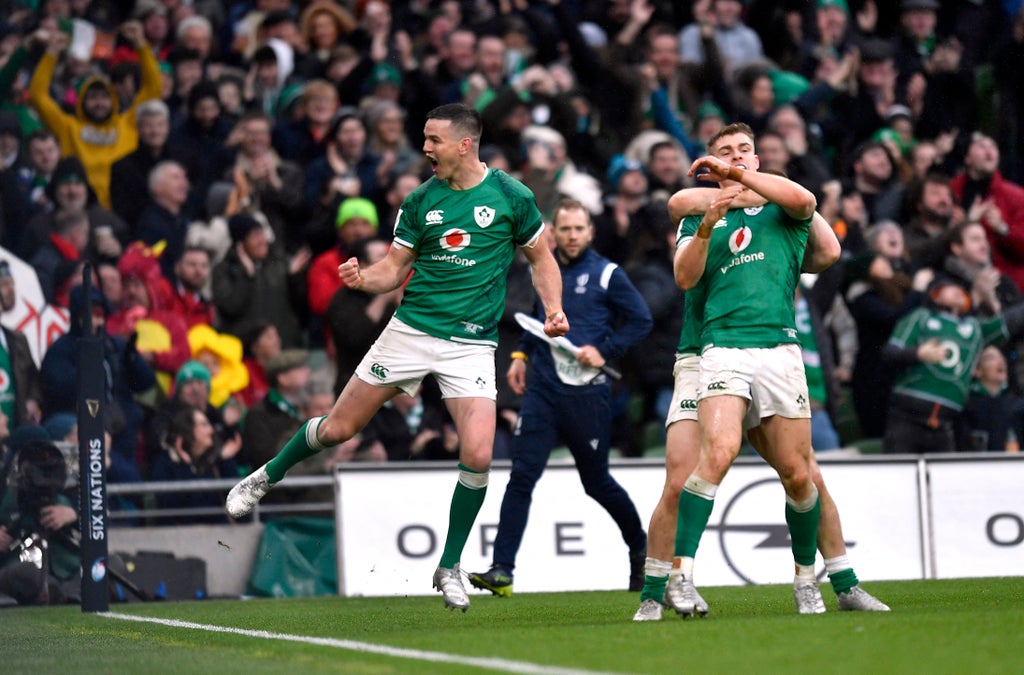 In-form Ireland launched their Six Nations campaign in style by brushing aside depleted reigning champions Wales with a crushing 29-7 bonus-point victory in Dublin.

Outclassed Wales arrived at the Aviva Stadium devoid of a host of injured star names and were dominated from start to finish on a torrid afternoon.

Only a late converted try from tournament debutant Taine Basham prevented them being nilled in the championship for the first time.

Having gone through a transitional phase under head coach Andy Farrell 2018 Grand Slam champions Ireland are beginning to look the real deal again after an outstanding autumn, which included glory against New Zealand.

Captain Johnny Sexton added nine points with his boot to complete a one-sided scoreline on a blustery, gray afternoon.

Supporters returned for a Six Nations fixture for the first time in 699 days following the easing of coronavirus restrictions.

Ahead of kick-off, the 51,700 in attendance fell silent in memory of former Ireland and Lions captain Tom Kiernan, who died on Thursday at the age of 83.

Diminished Wales had a decent share of the crowd but had traveled across the Irish Sea with a lengthy absentee list, which included the most-recent Lions skipper Alun Wyn Jones.

The loss of almost 700 caps of experience was apparent from the outset.

Debutant Mack Hansen – the sole newcomer in a fairly-settled Ireland starting XV – made an instant impact to instigate the third-minute opener.

After accelerating clear to start the initial move, the United Rugby Championship’s leading try scorer teed up Connacht team-mate Aki to dive over unchallenged in the left corner.

Wayne Pivac’s visitors upset the odds to win a 28th championship in 2021 but struggled to gain a foothold in the game.

Only some wayward kicking from fly-half Sexton, who converted Aki’s score before missing a couple of penalties in the testing conditions, prevented them from falling further behind against commanding opposition.

Wales – captained by Dan Biggar for the first time – were 10-0 behind by the time they finally gained some meaningful territory after Ireland skipper Sexton made it third time lucky.

Yet they were unable to force a penalty during an opening period of relentlessly physical rugby and would have been grateful to still be in touching distance at the break.

Quick ball deep inside the visitors’ 22 culminated in Sexton spraying a pass out to winger Conway, who held off a last-ditch tackle from stand-in Wales center Josh Adams to scramble the ball over the line.

Sexton, who nailed the tricky conversion from the right flank, received on-field treatment minutes later following a hefty collision, which resulted in a yellow card for Adams.

Ireland swiftly made the most of their numerical advantage as Conway strolled in for his second to put the result beyond doubt, with Sexton maintaining his perfect conversion record.

Wales were in damage limitation mode but powerless to resist a home side in full flow.

Ringrose stretched the lead in the 60th minute with arguably the try of the game, weaving beyond a series of red jerseys to gleefully dot down.

Wales eased their embarrassment slightly with around five minutes to go as Dragons flanker Basham pounced on a loose ball to charge under the posts, with Callum Sheedy adding the simple conversion.

But the day undoubtedly belonged to Ireland as their emphatic victory avenged defeat in Cardiff in last year’s opener.

The impressive progress of Farrell’s men will be severely tested during next weekend’s trip to pre-tournament favorites France, while the Welsh will look for a response at home to Scotland.