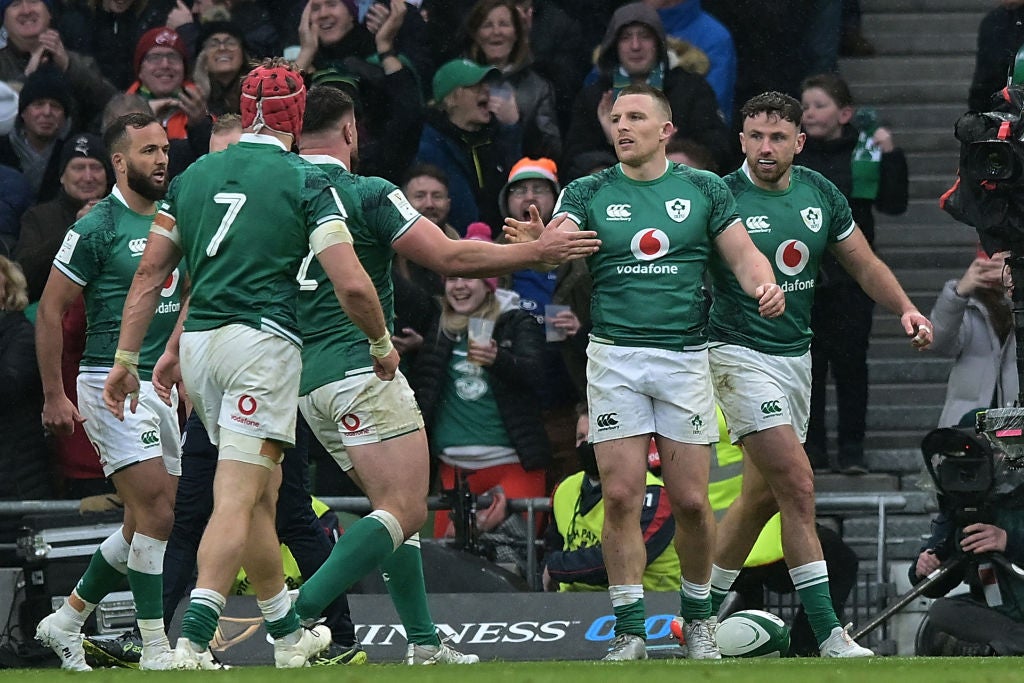 According to Philippe Saint-Andre, France should be fearful. While a certain amount of partisan proclamation is expected ahead of any Six Nations fixture, not least one of the magnitude of this encounter, the former France boss caused a stir when he suggested to midi olympique on Monday that Ireland would be a better side without Johnny Sexton. Perhaps the Montpellier boss had a premonition – a tweaked hamstring in Wednesday training will leave Ireland without their fly-half and captain for this collision of championship favorites under the Paris lights.

“It is what it is,” said Ireland head coach Andy Farrell of Sexton’s absence. “There are always twists and turns, especially within the Six Nations. There are always going to be things that we have to deal with.

“We play the same game, we keep making good decisions. Nothing changes as far as we are concerned. It is a great development for us as a team going forward and we still expect to be at our best.”

We will find out rather swiftly if Saint-Andre was right, but certainly a more sizeable blow for Ireland is hard to imagine. If the great strength of this Irish side is the breadth and quality of their attacking orchestra – the tight five forwards able to play timpani and strings; the consonance of the midfield accompaniment – then Saturday will reveal how they play without their conductor.

Taking the baton in Sexton’s stead will be Joey Carbery, remarkably starting for the first time in the Six Nations, which speaks both to the captain’s command of the Irish side and Carbery’s injury misfortune.

The Munster fly-half has long looked Sexton’s likeliest successor, and helped close out a victory over the All Blacks in November, but chances like this have been few and far between. It is not just that he will be facing a brilliant French team, but Carbery has played just twice away from home in the Six Nations.

France were the last side to beat Ireland, then, as now, with Sexton absent, last year. Fabien Galthie makes two changes from the win over Italy, with Yoram Moefana’s tidy touches off the bench earning him a promotion to fill the sizeable space left by Jonathan Danty in the centres, and Francois Cros’ spoiling breakdown hands favored ahead of Dylan Cretin.

The French side trained with the Foreign Legion ahead of the Six Nations and defensive general Gael Fickou will hope to have picked up a few tips to organize outside of the young Moefana. In a hint at the hosts’ late game strategy, six forwards are primed on the bench; Ireland will counter with Iain Henderson and Robbie Henshaw, who may be short of recent match fitness but should provide plenty of veteran nous and physical edge in the last twenty minutes or so.

One of the great patterns of the Irish winning run has been the manner in which they have imposed themselves on the game, asking the opposition to play to their allegro rhythms. Even without Sexton, Farrell is clear that his side of him must again take the bull by its French horns.

“It’s not just about the number ten as far as the direction of the team is concerned. It’s about everyone that takes the field,” the Ireland head coach explained.

The point was made to Farrell this week that Ireland will play two of their World Cup pool games in the Stade de France, and a potential quarter-final too, perhaps even against the hosts. Sexton’s absence is a reminder that the fly-half cannot go on forever – he will be 38 come the start of the 2023 tournament. If Farrell’s side are to disprove the familiar narrative of an Irish side peaking too soon, then a chance for Carbery in a fixture like this may not be a bad thing.

Not that it makes Ireland’s business any easier in the immediacy – the home side are now big favourites. France will still have to win in Edinburgh and Cardiff but clear this hurdle and the Six Nations clean sweep for which this side have felt destined will be one grand step closer.

Having again overcome England, the assumption is that Scotland should now build upon their success with a first victory at the Principality Stadium since 2002. Given Welsh rugby’s identity crisis on and off the field, they will hardly have a better chance. Gregor Townsend has a team of streak-enders: long runs without wins at Twickenham and in Paris were brought to a close last year, and Scotland won in Llanelli two years ago.

And yet, perhaps fearing another false dawn, it is not with unbridled optimism that Scottish supporters head to Cardiff. A crowd 80,000 strong will surely lift the home side, even if the stadium beer has been weakened, and the injury to Jamie Ritchie is a major blow – Sam Skinner is promoted fill the six shirt, while Townsend has also swapped out his front row. Wales handed Jac Morgan, the latest poacher from their seemingly bottomless well of back-row talent, a debut at seven.

While eyes will be rightly drawn to affairs in Paris the result in Saturday’s first helping may have just as much bearing come the final weekend. Win in Wales and even the most ardent pessimists may just start to believe this could be Scotland’s year.

There has been some overreaction to England’s narrow opening loss to a very good Scotland side, hampered as Eddie Jones’ side were by injury, but the manner in which their attack was blunted has been a persistent problem. It was therefore a more than mild surprise that Mark Atkinson did not even make the first cut to 27 for their attempt to pre-Valentine’s Day weekend in Rome.

Atkinson would not necessarily be a natural fit alongside incumbent Henry Slade but his similarities to Marcus Smith’s Harlequins inside center safety blanket Andre Esterhuizen have been oft-noted. In the absence of Owen Farrell, it is a surprise that Jones has not taken the opportunity to have even a cursory glance at how the English midfield looks with the Gloucester center in it.

It should not matter – England have never been beaten by their opponents and a home win really would be the stuff of Roman mythology. But against both New Zealand and now France, Italy have shown an ability to frustrate defensively, impressing particularly with their accuracy and intensity in contact last weekend against a side packed with strike-runners. It is unlikely that England enjoy an afternoon of just fun and frolic.