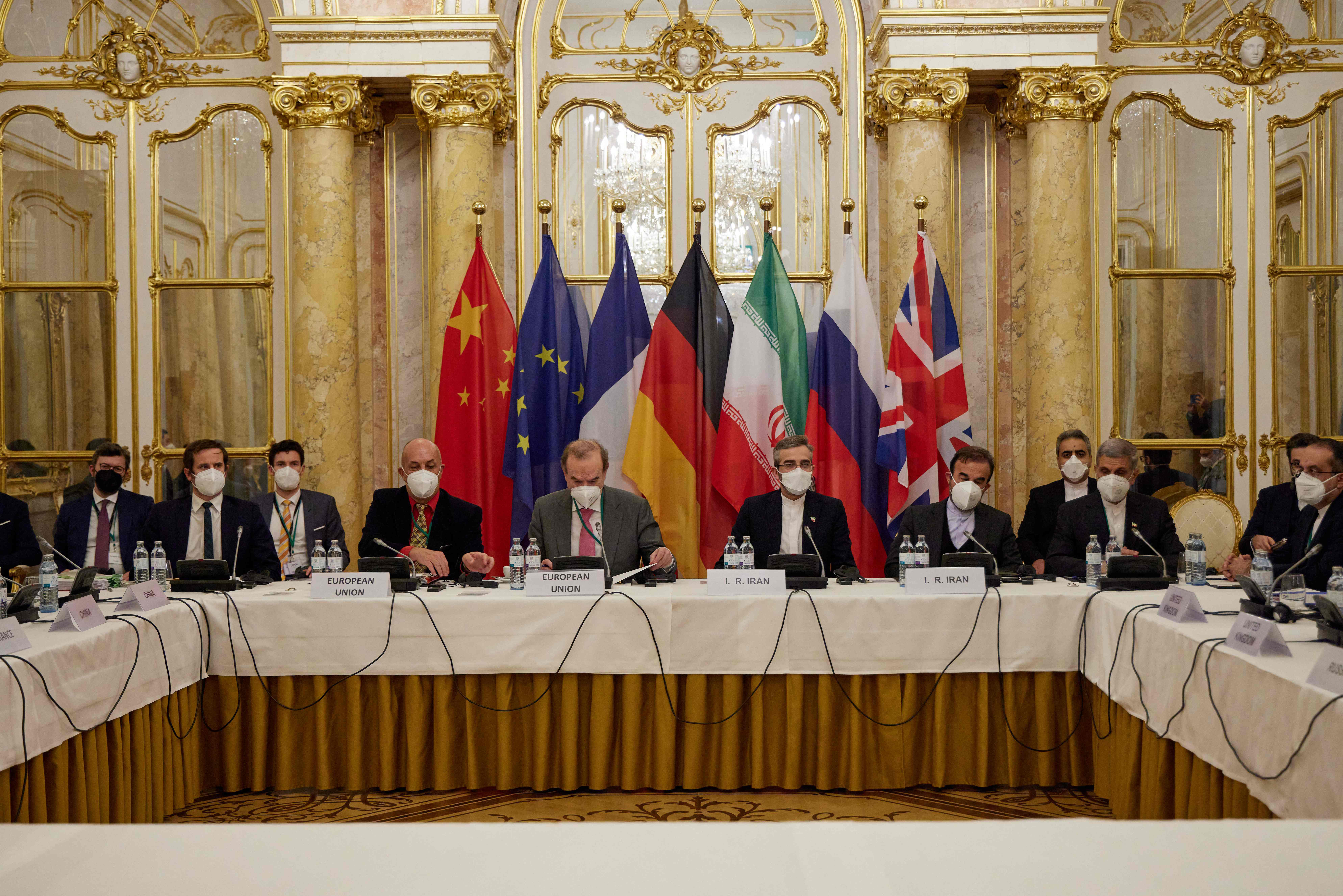 After eight rounds of negotiations, Iran and the United States have ended 2021 without having been able to reactivate the agreement that put an end to the Iranian nuclear program. The positions of both are so distant that they do not even sit at the same table in Vienna (Austria), where the talks are held with the mediation of the EU and the other signatory countries of the pact abandoned by the Donald Trump Administration three years ago. . Many analysts warn that there is no alternative to diplomatic channels because resorting to military action would be a disaster for both. The problem is that time is short.

Shortly after the eighth round began on Monday, Iranian Foreign Minister Hossein Amirabdollahian hinted that progress was being made. “The Vienna talks are going in the right direction,” he told reporters before stating that the agreement depended on the “good faith” of the other party. However, the US negotiator, Rob Malley, has assured that there are only “a few weeks” left to revive the agreement if Iran continues with its current pace of nuclear activities.

It is unclear whether Amirabdollahian’s positive tone seeks to prevent Iran from being held responsible for an eventual breakdown of the dialogue, or to send a signal of greater flexibility amid the impatience of Americans and Europeans. For these, the development of the Iranian program threatens to render meaningless the Comprehensive Plan of Joint Action (PIAC), the official name of the pact, which Joe Biden has tried to recover since he arrived at the White House in January 2021.

The progress made in the first half of last year was interrupted with the election of the ultra-conservative Ebrahim Raisí as president of Iran. The formation of a new negotiating team delayed the return to Vienna until the end of November. Since then, progress has been unnoticeable, something that both US and European officials attribute to the fact that the new administration has rejected the commitments made by his predecessor, Hasan Rohaní.

Iranian-American journalist Negar Mortazavi, author of a podcast titled Iran, admits that the new Iranian rulers have “a tougher stance towards the West, especially the United States, and also towards nuclear negotiations.” For conservatives, Trump’s decision confirmed their suspicion of any commitment to that country. Even so, he defends that “they want an agreement, and prefer the PIAC [a otra alternativa], because it will bring relief from sanctions, the Iranian economy is under a lot of pressure and to improve it, there is no other way ”.

The problem is that the starting positions of one and the other are very distant. Tehran insists that all sanctions be lifted before curbing its nuclear activity and wants guarantees that a future US president will not renege on the pact again. Meanwhile, Washington, under its demand for “compliance by compliance”, what it wants, as political analyst Ali Ahmadi explains to EL PAÍS, is for “Iran to reverse the technological advances it has made” since Trump retired from the PIAC and imposed harsh sanctions on Iran.

The Islamic Republic responded to this “maximum pressure” policy by significantly accelerating its atomic program. Its calculated trickle of violations has so far eluded the complaint of the rest of the PIAC signatories (China, Russia, the United Kingdom, France, Germany and the EU) before the UN Security Council, but it has been emptying the content of the agreement. .

According to the latest reports from the International Atomic Energy Agency (IAEA) – in charge of supervising technical compliance with the agreement – Tehran returned to the negotiating table last November with 11 times more enriched uranium than allowed. In addition, much of this fuel reaches up to 60% purity, a degree well above the 3.67% authorized by the pact and closer to the 90% required for eventual military use. The timeframe for Iran to have enough enriched uranium for an atomic bomb has been shortened from a year to a month or two.

Hence the fear of experts that the nuclear crisis that PIAC was trying to avoid will become a reality in early 2022. Something different is the ability or willingness to turn that material into a weapon. IAEA Director General Rafael Mariano Grossi has stated that he has “no information that Iran has a nuclear weapons program or any activity that leads to a nuclear weapons program.” Iranian leaders have always denied that their nuclear ambitions, which predate the founding of the Islamic Republic in 1979, had a military objective.

Mortazavi acknowledges that “the gap is great”, but considers that “both parties are serious about wanting diplomacy and reaching an agreement.” In his view, the difference is that the United States abandoned the agreement entirely, while Iran “took a year to respond” and “has not completely pulled out.” Hence, he considers that, although the pact signed in 2015 remains “with assisted respiration”, it is not yet dead.

The journalist insists on the need for both to make concessions. But mutual mistrust makes the first step difficult. The distorted image that each has of the other does not help either. The United States continues to hope that economic pressure will force Tehran’s resolve, while Iranian leaders have interpreted the US withdrawal from Afghanistan as proof that Washington has no stomach for a new war in the Middle East. That stubbornness in imposing on the other blocks any way out.

For Ahmadi, what keeps Iran and the US negotiating despite everything “is that there is no real alternative to PIAC for either party.” Mortazavi agrees. “The alternative to a diplomatic solution will be more costly and dangerous, as it will probably include a military escalation harmful to both Iran and the United States, and other countries in the Middle East,” he says.

According to Ahmadi, the United States “has known for a long time that military strikes will only delay the program and, at the same time, probably convince Iran that it needs nuclear deterrence and that the maximum pressure policy has failed.” On the other hand, Iran needs sanctions to be lifted to revive its economy. “Even their ties to China depend on Chinese companies knowing that they are not going to be sanctioned,” says the analyst.

See also  June Brown: How did Dot Cotton actress die, how old was she, and tributes to the Eastender actress

Hence, one of the measures that have been put on the table to bring positions closer is an understanding for Iran to freeze its nuclear activity at current levels in exchange for some economic benefits. But whatever the outcome of the negotiations, the research and development that Tehran has obtained over the past two years is irreversible.

Coinciding with the start of the eighth round of nuclear negotiations, the family of Benjamin Brière, a Frenchman imprisoned in Iran, announced last Monday that he had started a hunger strike to protest against his detention conditions. Brière, 36, was arrested in a natural park in the north of the country in May 2020 and charged with espionage and propaganda against the Iranian regime for “photographing prohibited areas”, something his family rejects.

At least a dozen citizens with Western passports, most of them binational, are in detention in Iran. Several international human rights groups see this as a form of pressure for concessions. Following the hunger strike in Brière, some activists recall that all democratic countries that negotiate with Tehran in Vienna have a citizen in that situation. Such is the case of Nazanin Zaghari-Ratcliffe, Anush Ashuri and Morad Tahbaz (Iranian-British); Nahid Taghavi and Jamshid Sharmahd (Iranian-Germans), and Iranian-French Fariba Adelkhah and Nazak Afshar. Even the host country of the talks, Austria, has the cases of Kamran Ghaderi and Massud Mossaheb. But Iran does not recognize second nationalities.

Lion bite, puck to the head and cut by a fish tank – strangest sporting injuries