This Friday the documentary opens in theaters Aita Mari, the film about the tuna vessel destined for scrapping that the NGO Salvamento Marítimo Huitario (SMH) transformed into a rescue vessel to save people in the Mediterranean Sea that has the participation of EiTB.

The film, by the San Sebastian photojournalist and director, Javi Julio, offers the viewer the opportunity to embark on the Aita Mari and see the transformation of the tuna boat and live in some way the first humanitarian mission of the NGO back in 2019.

To learn more about the day to Aita Mari We have spoken with one of the crew members. He is Izaskun Arriaran, a nurse and volunteer for the NGO Salvamento Marítimo Humanitario.

What is the origin of the name Aita Mari?

José Mari Zubia, alias ‘Aita Mari’, was a sailor from Zumaia known for helping fishermen. On one of those occasions when he went to help some castaways, he died buried by the waves. We thought it was a nice way to praise their work, also bearing in mind that the purpose of the SMH ship was the same.

Since the transformation of the tuna boat into a rescue vessel began until it left for the Mediterranean in 2019, a long period of time passed …

It was a tuna vessel destined for scrapping that, thanks to the work of volunteers, was transformed into a rescue vessel. During two summer months we met a large group of people of different profiles to clean, paint, sand, etc. The transformation was completed more or less on schedule, but bureaucratic hurdles and paperwork lengthened the process. The ship was ready for autumn and then we were stuck in port for a year waiting for authorization to go out to sea. It was not something specific, since then they have always tried to put us in difficulties.

Finally, the ship received permission to sail to the Mediterranean in order to bring humanitarian aid to Chios and Lesbos. Once there, we request “dispatch” to go to the central Mediterranean to carry out rescue work.

And the first rescue arrived: 78 people. After five days of waiting the Aita Mari received permission to dock in Sicily

They were very hard days: bad weather, giant waves, wet people, cold. I especially remember one night when I was scared. The clinic remained open and we tried to warm people up. Once the storm had passed and as the hours and days passed, tension emerged among the migrants because they feared they would not reach port. So our job was to stay positive and try to lift their spirits. 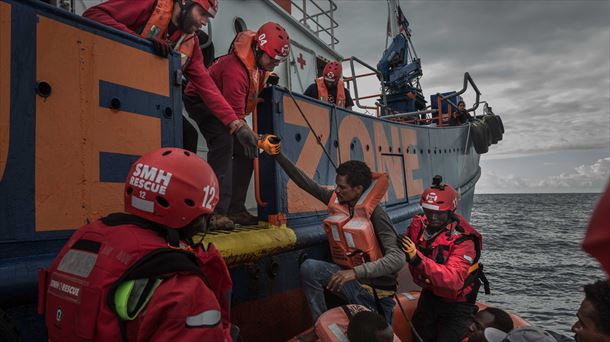 Rescued people going up to Aita Mari. Image from the documentary Aita Mari

How is a ransom usually?

We have rarely come across a ship. That happened to us, for example, on the penultimate mission. Usually it is the migrants themselves who ask for help. The NGO Alarm Phone receives the call and sends a notice to Italy, Malta, Libya and to all ships operating in the area. It is then that we begin to work on the search. That is a bit difficult to understand, sometimes it takes us 6-8 hours to get to that point. In that period of time there is a danger that the Libyan coastguard or the media from Frontex, the European Border and Coast Guard Agency, will arrive. In that case, they are returned immediately.

Once located, a speedboat descends from the Aita Mari to the boat. In that first contact, it is important to transmit tranquility to the migrants, to see how many people there are, if there are minors, pregnant women or sick people. Then you have to distribute the life jackets before getting everyone to the Aita Mari, in trips of 8-10 people.

And to wait for the authorities to assign a port …

What causes the most despair is the silence, the lack of response. Depending on what waters we are in, we ask that country for permission and if it does not respond we call Italy. When Italy tells us your flag is Spanish and it is Spain that has to give an answer, then we turn to Spain. The ball goes from one roof to another and meanwhile we are in the middle. It is difficult to see land and not be able to enter the port. This causes a lot of nervousness among the rescued people and you have to work very well with them.

After receiving permission, the landing arrives …

Now, due to covid-19, the process is very long, since PCR tests must be done before anyone leaves. If there are any positives, these remain on the boat until the rest come out. The minors are transferred to special centers and the adults are put on a ferry located in the port to quarantine. The crew members, on the other hand, have to quarantine the ship, with the anchor at anchor. 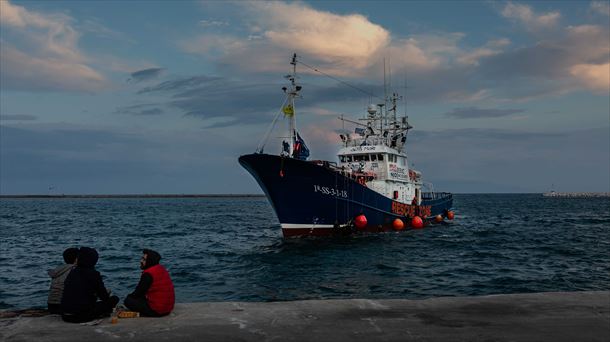 Do you keep track of how many people you have rescued?

Since the first rescue in 2019 about 530 people. We are a small boat and so far we could only accommodate 120 people. After the changes made to the boat during the summer stop, we can now go up to 150 people.

How much does each ransom cost?

It is really impressive. In addition to the salary of the crew, you have to pay for fuel, port taxes and many other bills. Each mission costs about 100,000 euros.

What is your main source of funding?

Public money is our main source of income: the Basque Government, the Government of Navarra, the three provincial councils and the town councils. We also receive help from companies and individuals.

I want to encourage people to see the documentary because it can do a great job of raising awareness in our environment, to see where these people come from, what problems do you have, … Sometimes we receive criticism because we leave, because we are in the port. The documentary helps to understand everything that surrounds a rescue. I believe that from here we have to work on respect for migrants. From here you have to do awareness work, not only with children but also with adults.