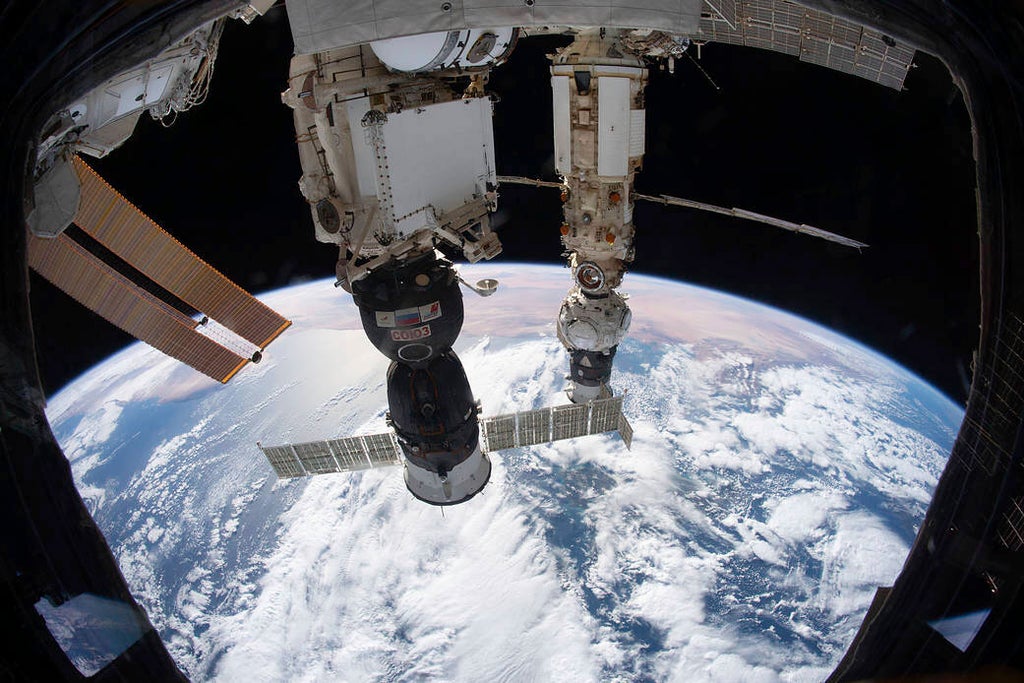 Despite optimistic early statements from Nasa and the European Space Agency, the decades of cooperation between Roscosmos, the Russian space agency, and its western counterparts could become another casualty of Russia’s invasion of Ukraine.

roscosmos halted soyuz rocket launches from the European spaceport in French Guiana on Friday, while ESA announced on Monday that it would help implement sanctions against Russia imposed by ESA’s member states and assess the consequences of its programs involving Russia.

But so far, at least some astronauts and cosmonauts are managing to fly above the conflict and rhetoric on the ground – 432 kilometers above to be exact. Aboard the International Space Station, two Russian cosmonauts, including the current expedition’s commander, one ESA astronaut, and four US astronauts continue maintaining the station, conducting experiments, and preparing for spacewalks and crew rotations, regardless of the war below.

The ISS program began as the Space Station Freedom in the 1980s, Nasa’s counterpart to the Soviet Union’s Mir space station. After the dissolution of the USSR, the US invited the newly minted Russia Federation to join the US and its European and Japanese partners in what became the ISS. Construction in orbit began in 1998, and the space station has been continuously occupied since 2000.

Since the start of the war in Ukraine on Thursday, the current ISS crew members continued in that same tradition of cooperation in space.

On Friday, as artillery lobbed munitions into Kyiv and the US and the EU strict sanctions imposed on Russia, the seven ISS crew members joined mission commander and Russian cosmonaut Anton Shkaplerov in an emergency drill to practice their coordinated responses to fires, chemical leaks, and other unlikely events aboard the space station. Nasa astronaut Tom Marshburn conducted experiments in skin aging, while ESA astronaut Matthias Maurer studied the genetics of cotton cells in space, and Nasa astronaut Raja Chari performed maintenance on a treadmill the crew use for exercise.

on monday, as new financial sanctions took effect against Russia, ISS crew members took blood samples and worked on jet packs in preparation for upcoming spacewalks planned for 15 March and 23 March. And despite Roscosmos chief Dmitry Rogozin tweeting on 24 February that Russia might pull out of the ISS program due to sanctions against his country and cease using Russia’s equipment to help maintain the space station’s altitude, Monday saw Russia use the engines of its ISS Progress 79 cargo craft to boost the station to a slightly higher orbit.

The higher orbit is essential for making the rendezvous with the Soyuz MS-21 spacecraft, which Roscosmos is scheduled to launch from the Baikonur Cosmodrome in Kazakhstan on 18 March. Assuming such operations remain insulated from the fallout over the war in Ukraine, the Soyuz MS-21 is supposed to return to Earth on 30 March carrying Mr Shkaplerov, his follow cosmonaut Pyotr Dubrov, and Nasa astronaut Mark Vande Hai, the latter of which will chalk up a new American record of 355 consecutive days in space.

Mr Vande Hai and his cosmonaut crew mates will land in southeast Kazakhstan.

The ISS will also see new arrivals on 30 March, as the first all-private mission to the space station, Axiom Space’s Ax-1, ferries four paying astronauts to the ISS aboard a SpaceX Crew Dragon spacecraft for a 10-day stay.

Russian President Vladimir Putin and Mr Rogozin have hinted that Russia might pull out of the ISS program in the past, but tensions between Russian and other ISS partners have not been as high as they are today since the days of the Soviet Union.

Whatever the outcome of the war in Ukraine and the consequences for continued Russian cooperation on the ISS, the space station’s life itself is already limited. Nasa has decided to get out of the space station business and has contracted multiple private US companies to build a new generation of commercial space stations before the close of the decade. The ISS will be purposefully deorbited by sometime in 2030.