Virginia Giuffre may be barred from seeking criminal action against Prince Andrew as part of her US civil case settlement with the royal, according to New York lawyer Mitchell Epner

Prince Andrew took the ‘best of the bad options’ by settling the case, a New York lawyer said (

Virginia Giuffre may be barred from seeking criminal action against Prince Andrew as part of their out-of-court settlement, according to a lawyer.

Former Assistant United States Attorney Mitchell Epner has lifted the lid on what he believes is inside Andrew’s settlement to Ms Giuffre.

It is estimated that the Duke has paid a £12million settlement.

Mr Epner described the deal as the ‘best of the bad options’ left for the Queen’s son – and a ‘major victory’ for Ms Giuffre.

It comes after it emerged that Ms Giuffre and Prince Andrew had reached a ‘settlement in principle’ over her civil sex abuse case.

The 38-year-old alleged she was forced to have sex with Andrew on three occasions when she was Jeffrey Epstein’s 17-year-old sex slave.

Andrew has always denied these allegations.

“Her statements to date have not been enough to get the state prosecutors in New York to go after Prince Andrew.

“The real jeopardy for him would be if he said something in the deposition which could have created criminal liability for him.

“Because that deposition will now not take place… it’s virtually certain he won’t face criminal liability.”

Mr Epner, 52, estimated that Prince Andrew has agreed to pay at least £3.7million to Ms Giuffre personally as part of the settlement. The legal deal will also include a donation to charity and legal fees.

“I have a reasonable estimate that his legal fees to carry the case through from where it is now to the end of a trial would have been $4million to $6million,” he said.

“I can’t imagine this settlement would have been for less than $5million. It’s likely to be a multiple of that. And this is just for her – not for her charity.”

He said: “You don’t commend the bravery of someone you think is lying about you.

“He admits she is a survivor of being trafficked, he says she was standing up for herself and others, he says he didn’t mean to malignant her character.

“The only way that statement makes sense is if he’s admitting what she had been saying about him was substantially true.”

Andrew has always denied Ms Giuffre’s claims and although a settlement has been reached he has not admitted any wrongdoing.

Lawyer Alan Collins, who previously represented victims of Jimmy Savile, said settlements in the UK do not prevent victims from making criminal complaints.

I have added that Andrew will likely be feeling mixed emotions about the outcome.

Mr Collins told the Mirror: “He will be feeling a sense of relief that it’s over but what a price to pay in human terms.

“Forget what has to be written on the check, he has been vilified, his reputation has been torn to shreds due to his association with Epstein.

“The case may be over but the legacy is something he will have to live with.”

Mr Collins, who is a partner at the UK legal firm Hugh James, thinks Ms Giuffre will also feel relieved as she has avoided the brutal experience of being cross-examined in court.

He said one of the silver linings of the case is that it could encourage victims of sexual offenses to step forward.

“There’s probably countless victims and survivors out there who thought ‘what happens if I go to the police about what happened to me’,” Mr Collins added.

“They may gain some comfort from all this. The case demonstrates that people are listened to and that cases can be taken to court and can result in a settlement.

“Objectively, the case has been useful from that perspective.”

The two sides have reached a ‘settlement in principle’
(

As part of the settlement, the Duke of York has vowed to make a “substantial donation” to Ms Giuffre’s charity, which supports victims’ rights.

In his statement he praised her “bravery” and insisted he “never intended to malign” her “character.”

A document submitted to a US court said: “Virginia Giuffre and Prince Andrew have reached an out of court settlement.

“The parties will file a stipulated dismissal upon Ms Giuffre’s receipt of the settlement (the sum of which is not being disclosed). 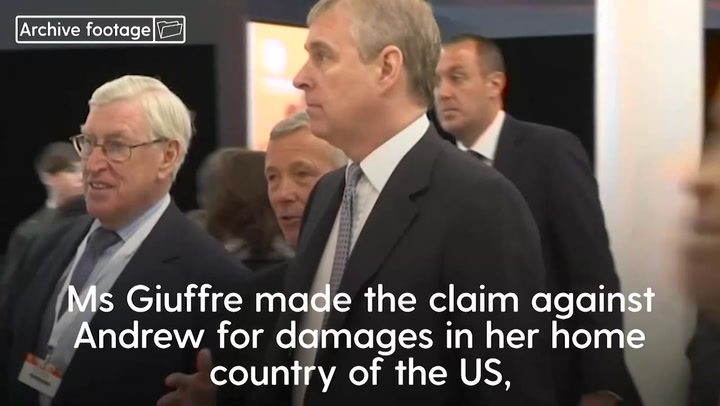 “Prince Andrew has never intended to malign Ms Giuffre’s character, and he accepts that she has suffered both as an established victim of abuse and as a result of unfair public attacks.

“It is known that Jeffrey Epstein trafficked countless young girls over many years. Prince Andrew regrets his association with Epstein, and commends the bravery of Ms Giuffre and other survivors in standing up for themselves and others.

See also  'Our brothers did this to us': In Kyiv, Ukrainians are sheltering in place — or heading to the front lines